After so many days and nights alone, walking up the Rio Jeniemeni to Lago Jeneimeni, I 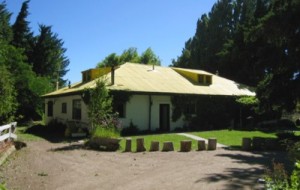 think I was about half-starved and half-crazy, and I know I was definitely sick of eating trout. So when I got back down to Chile Chico I sought out some human contact and something useful to do with myself. I had noticed a hosteria outside of town on my way up into the mountains that looked nice, so I headed there and set up camp. Lucky me, not long after the tent was pitched I heard the sounds of work coming from out 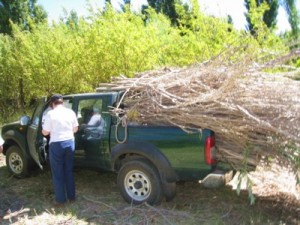 in the orchards and made haste in that direction. I found two women out among the apple trees cutting dead branches and loading them into a truck. They looked at me a little funny when I pitched in, but they were not about to refuse the help. I worked with them all afternoon in the orchard, and then cut firewood in the wood yard near the house for three hours that evening. 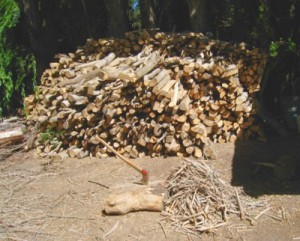 The white woman turned out to be the owner of the place, Veronica Raty. She is the granddaughter of a Belgian immigrant who bought the land in 1951. The family did well, and now has land holdings exceeding 400,000 hectares scattered across Chile. Veronica's grandfather hunted pumas and foxes to protect the sheep on his estancias, and there are a number of cured pelts and skulls on display in the inn, along with his traps and weapons. Veronica lives there six months out of each year with her 11 year old daughter Mariapaz, and a few female peons. Mariapaz is an excellent rider, and could be seen most hours of 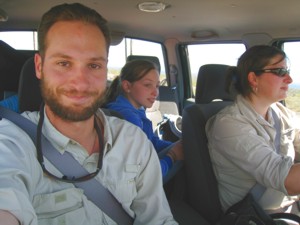 all days on her white horse making the rounds of the property. Veronica's husband is an architect and sculptor whose work is evident all about the property, but he rarely has time to leave the big city and get out to the place. When I finished cutting the wood they fed me and we made plans to work the next day as well.  I stayed there for a total of four nights, working with the owner and staff in the fields during the day, and lounging around the campsite nursing sore muscles in the evenings.   Then two German 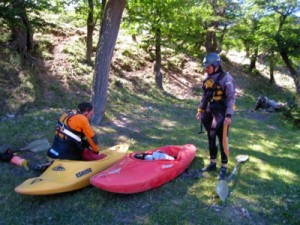 kayakers arrived and wanted to float the Jeniemeni, so I agreed to go up there with them and drive their vehicle from the put-in point to the take-out. I could hardly believe that I was back on that river for the third time. They put in up near the lake, planning to float down to where my first camp had been, and I fished while they floated.   Much to my surprise it turned out to be a great day of fishing. The river up there is the perfect size, not quite a stream and not quite a river, with textbook, picturesque structure everywhere.   My first cast raised a fat 13" rainbow, and my next cast a 14" brown.   It went on like that all afternoon, culminating in a hatch of some sort of tiny midges that I was able to imitate with my smallest griffith's gnats 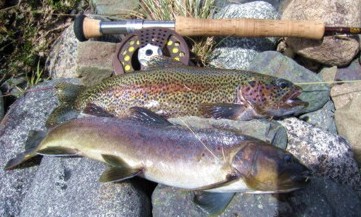 for a full two hours of dry fly action.   On the way out of the valley that evening we ran into a flock of sheep being driven by peons and dogs, and had to wait for them to pass. I was reminded of how novel this seemed the first time it ever happened to Erin and me in New Zealand, and thought about how normal it seems to me now. I brought a dozen fish back with me and divided them up amongst the hosteria staff, and the Germans, and I ate the rest that night. Mariapaz' horse is named Palomo, and he was tethered in the evenings near my camp. 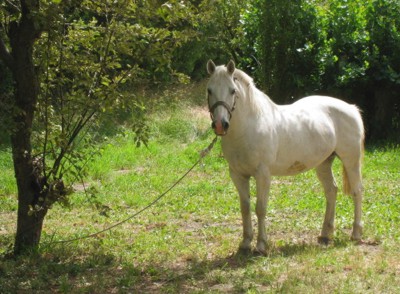 He wasn't crazy about me at first; I suspect due to the dearth of representatives of my gender milling about the place throughout his life, but I worked on him a little bit each night. By last night he let me rub him all over for an hour, and actually seemed to rather enjoy it.  Mariapas offered several times to let me ride Palomo, but considering his obvious feelings of apprehension regarding my existence in general, much less my potential presence on his back, I declined. I think we parted as friends though. No idea where I am headed next, but will update when I can. Hope everyone is doing well back home. Love to all - Justin