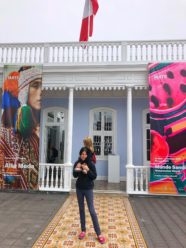 You can take the girl from fashion, but you can’t take fashion from the girl. My life has changed significantly after I left Los Angeles and found myself traveling the world, giving a whole new meaning to the words world and travel. If in the past travel included business trips and short vacations to trendy places, now it is slow paced tourism, often in poor and little developed areas of the world. This is not a complaint, but rather a choice and a definite change in perspective on many things in life.

When we found ourselves staying in the Barranco neighborhood of Lima for three weeks, one afternoon when Aya fell asleep I went to Mario Testino's MATE Museum which was located just 100 meters away from our place. This was my first time going somewhere interesting (grocery stores don’t count) by myself in over a month. 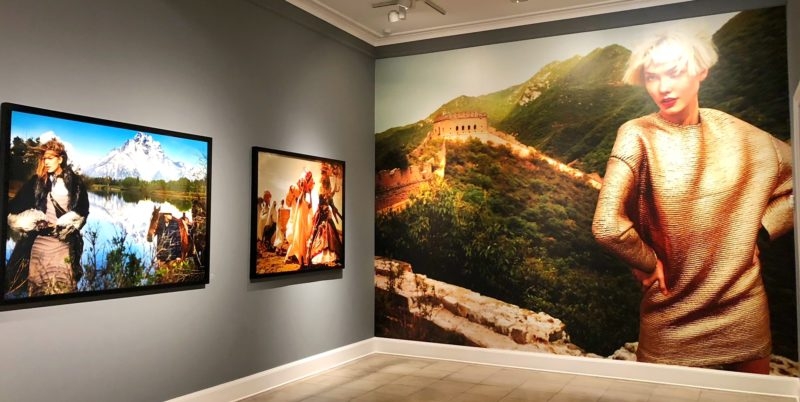 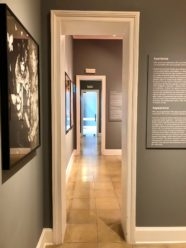 Mario Testino was born in Lima, hence the museum's location. It consists of several halls, a few permanent exhibits and one temporary exhibit. The first three halls included Testino’s photos of fashion models, actors, and musicians, and his work for famous magazines worldwide. The last hall showed a documentary with an interview talking about his perspective on photography. Walls in every room had the photographer’s quotes and stories about the way he perceives his work, places and people he has worked with.At the time of my visit the temporary exhibition hall was showing the work Watermelon World (Mundo Sandia) by Katherine Bernhardt. A permanent collection of Diana’s, Princess of Wales portraits was in a separate hall also showcasing a Versace dress worn by her on Testino’s July 1997 cover of Vanity Fair. 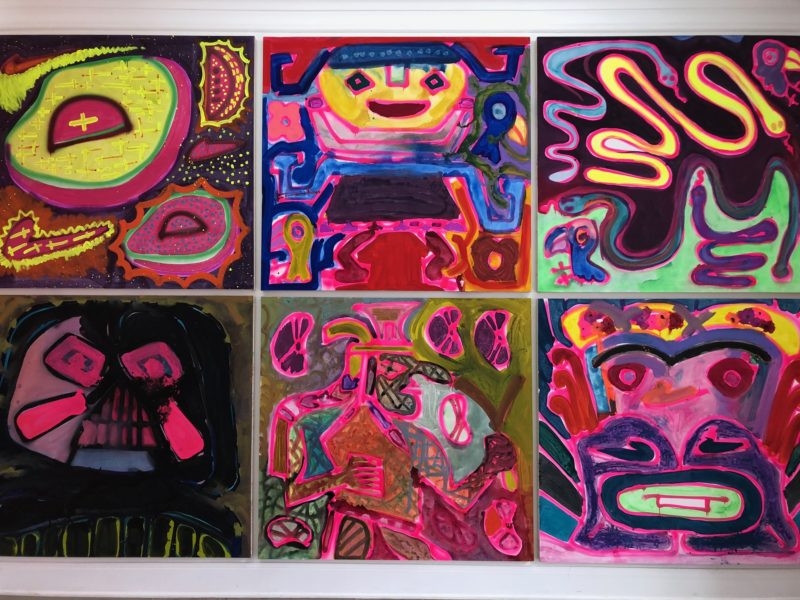 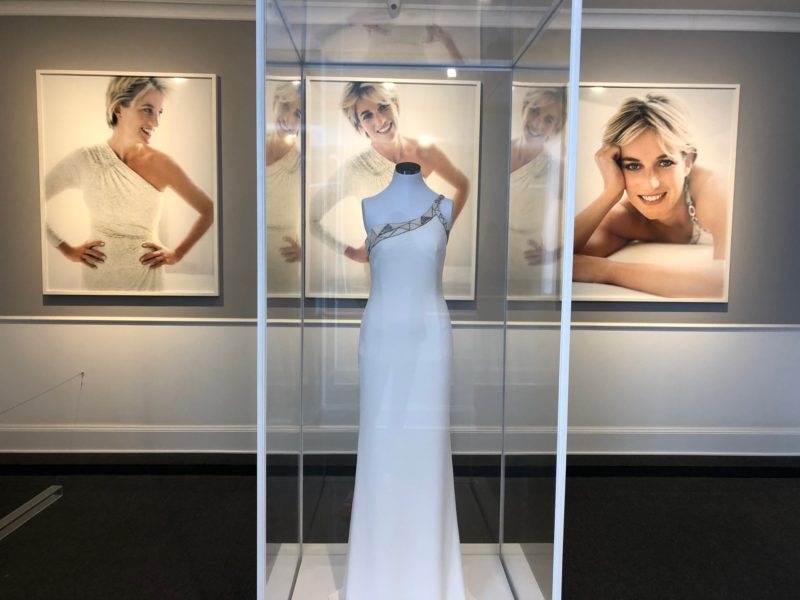 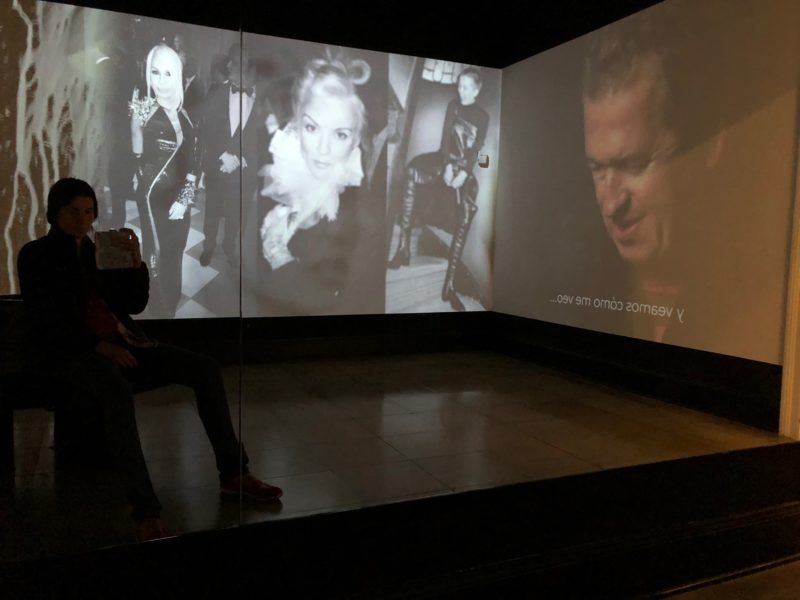 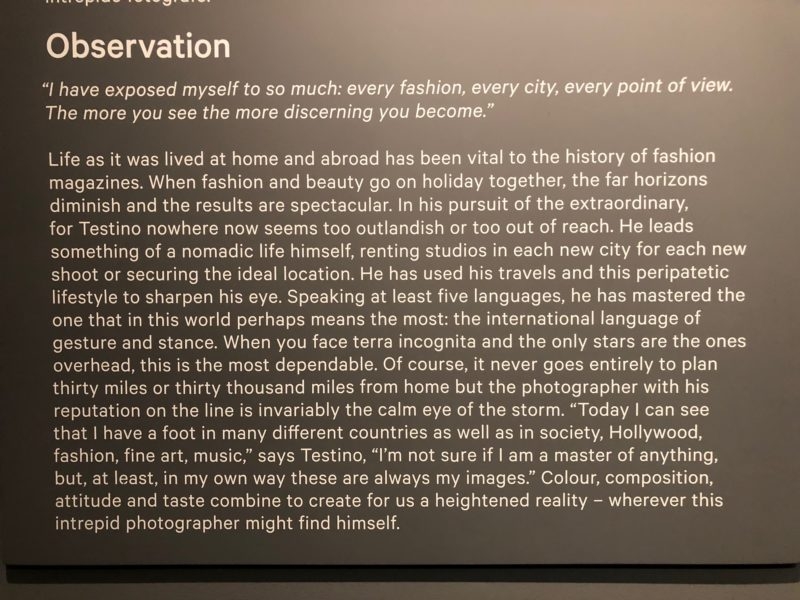 My personal favorite collection in the MATE Museum was Alta Moda, photographs mostly of women shot by Testino in the Andean region of Peru. The collection was launched in 2013 as a result of five years of work exploring Peruvian traditions, dress forms and the history of photography. 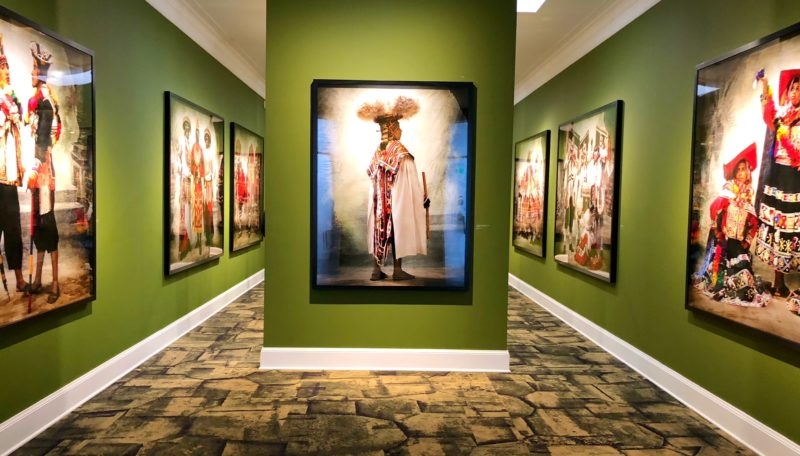 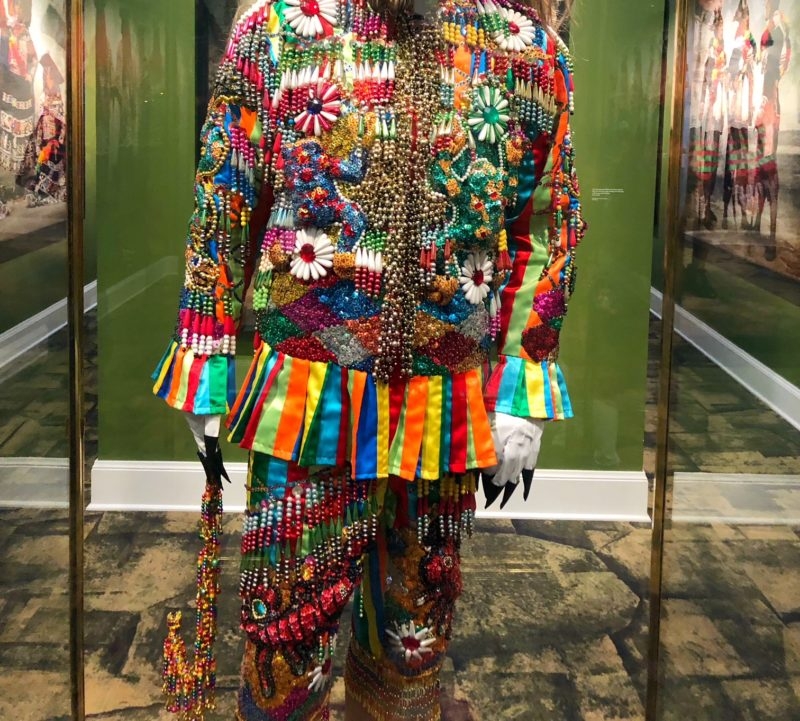 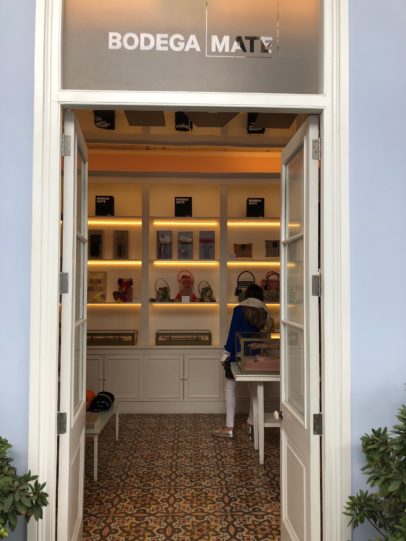 “The exhibition showcases Testino’s portraits of Peruvians local to the mountainous region of Cusco, wearing festive attire. Peru’s traditional hand made costumes appear to be as personal, exquisitely embroidered, and conceived and dyed (and as rich in imagination) as the creations of the finest Haute Couture ateliers. “The vibrancy of the clothes expresses the intensity of the spirit of the people who wear them,” Testino said. “I hope my images show how these traditions still exist in the present, at least for now.”

There is a store called Bodega on the territory of the museum. Bodega carries Peruvian style fashionable clothes and accessories, pieces of furniture and jewelry, as well as books with Testino’s works and some other items. Next to the store there is a little cafe, El Taller, which serves sandwiches, empanadas, tea infusions, coffee drinks, and variety of French deserts. I couldn’t resist the French part and splurged on a strawberry eclair and lúcuma macaroon together with delicious la Fidelia lúcuma tea, which I later tried finding in local stores without luck.

After not seeing sun (typical occurrence during winter months) and lacking brightness for over 2 weeks, I got recharged with vivid colors of Testino’s and Barnhardt’s collections and called it an afternoon well spent! 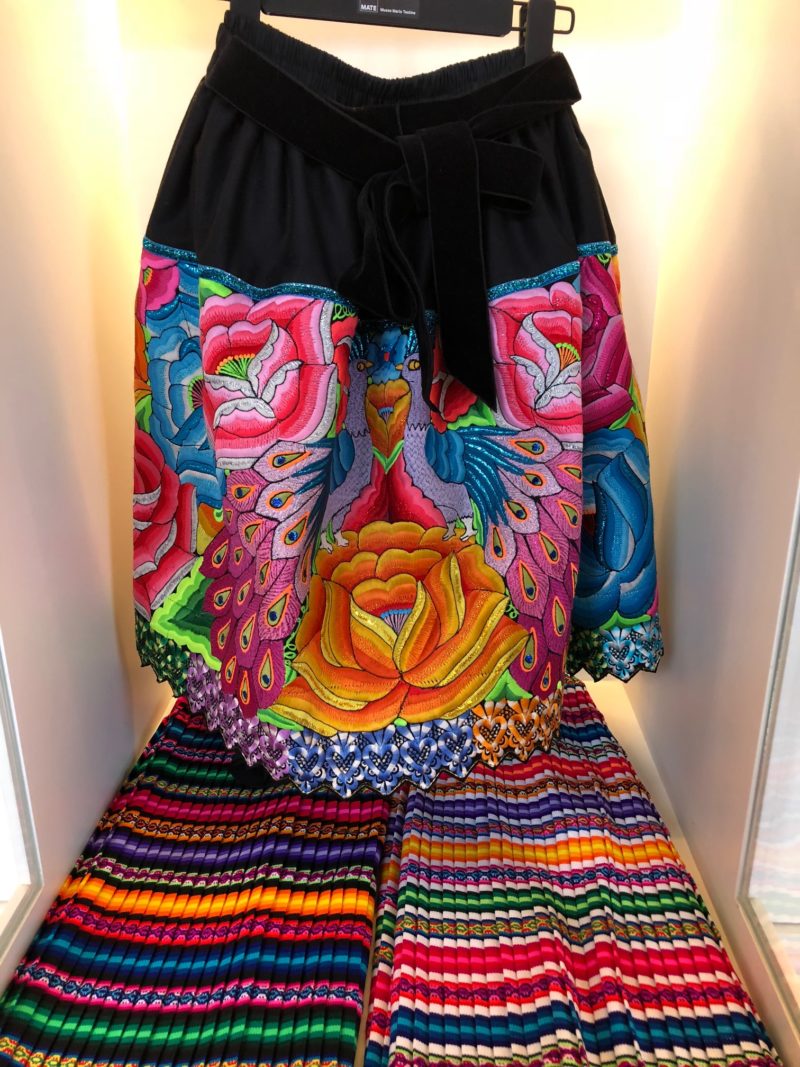 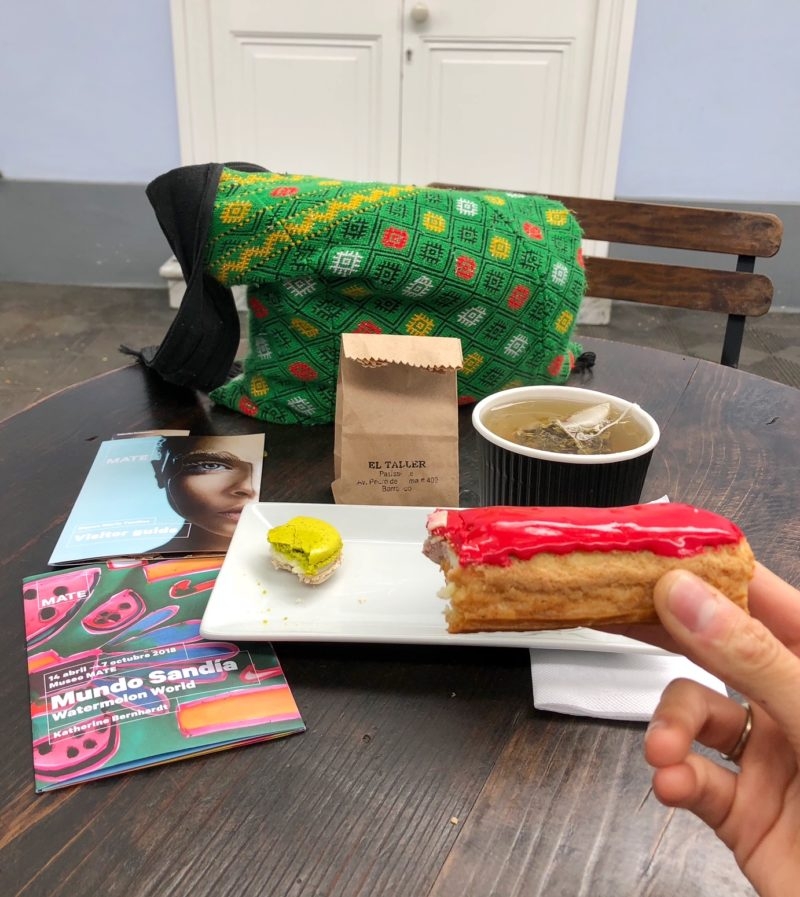 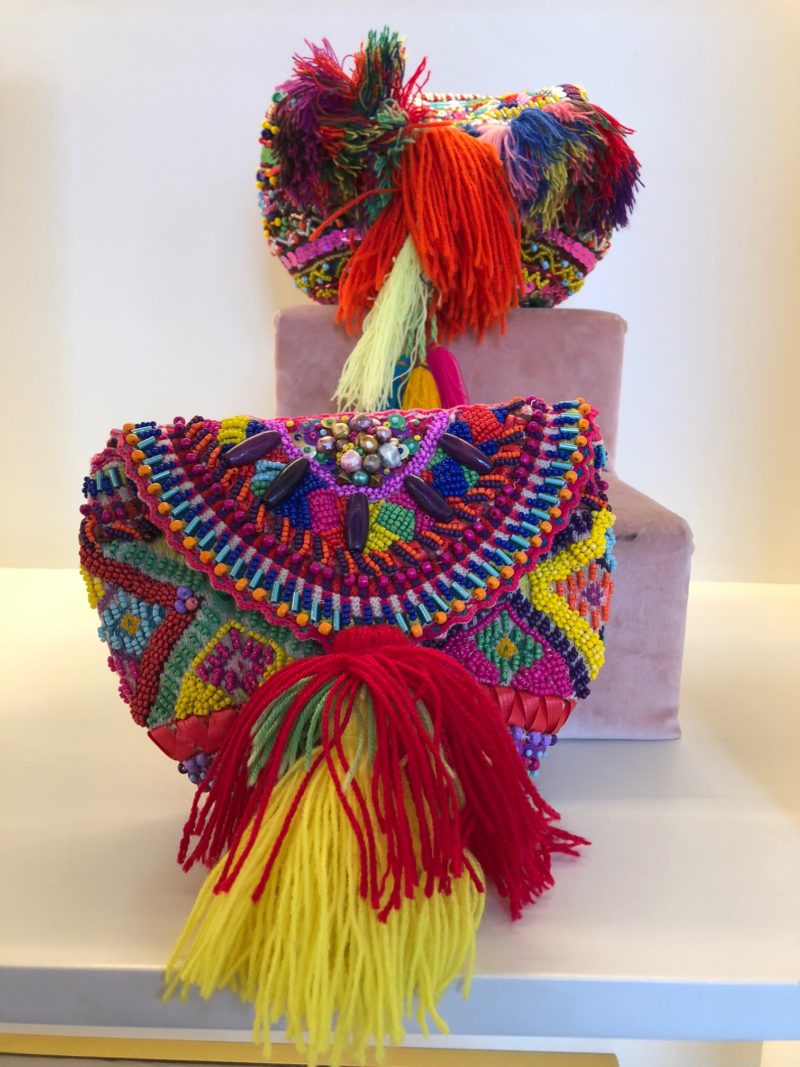