October 30, 2011
Tube flies – and introduction and tutorial
by 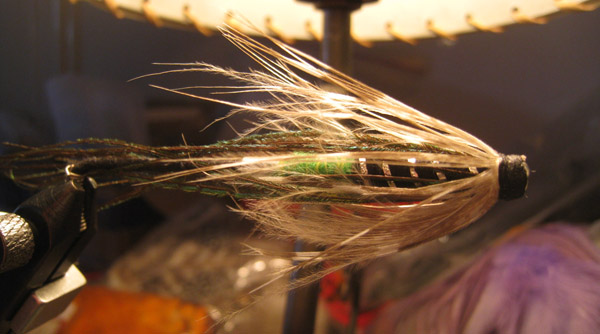 Most of you have probably at least heard of tube flies, but for many of my clients down here at least the concept is a vague one, and usually associated in their minds with Steelhead and Atlantic Salmon only.  Our fishery in my area of Argentina however is centered around rainbows, brookies, and browns, with the only difference between these fish and their northern-hemisphere counterparts being average size (they tend to err on the side of longer and heavier down here).  What goes along with that though is the need for us to use sometimes really big patterns to attract these beast’s attention, and in figuring out how far to push the envelope in that regard, a few years ago I started tying tube flies as a matter of convenience.  I haven’t turned back since, and now use tube flies not only for the trout down here in Patagonia but for Stripers in Cape Cod, bass in the farm ponds back in Georgia, and just about everything else streamer related in between. For anyone who hasn’t ever seen or read about tube flies, the concept is essentially this:  Whatever pattern is being tied gets tied onto a hollow tube, generally of semi-flexible plastic or rigid metal, instead of a hook.  The tippet then gets passed through this tube, and the hook is tied directly to the tippet behind the fly. 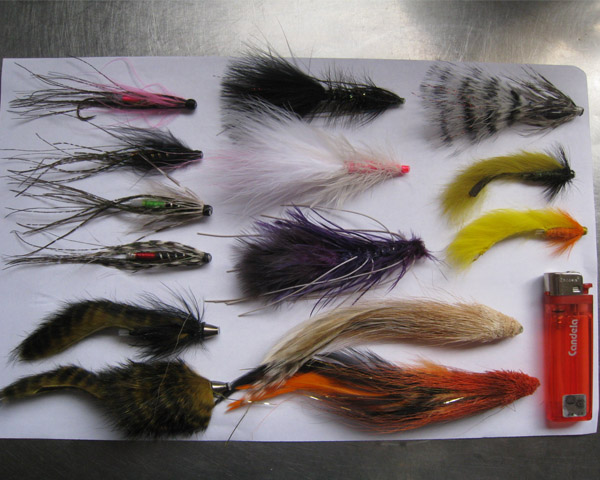 What attracted me to the technique initially was the ability to stack any number of flies I wanted onto the tippet in front of my hook, and as such, the ability to effectively change the overall length of a streamer at any time without having to have separate flies tied at every length I might want to fish in a given situation.  This allowed me to set up over working fish and experiment with gradually increasing the length of my streamers in between catches until I had reached the “size limit” at which the fish stopped taking my flies.  As it turns out that limit was a whole lot bigger than even I had imagined, and the average weight of my catches increased in proportion to the length of my fly as I went up.  Nowadays, most of the time when I hand a client the first fly of a trip he looks at me like I must be joking, and often as not when I tell him I’m serious he asks me if he can borrow one of my nine weights to throw the thing.  That’s another advantage to the tube fly system though, the ability to add a lot of length and bulk to a fly without necessarily increasing its weight by too great a margin.  Many of the patterns I frequently fish that are significantly larger in length and profile than say, a Galloup’s Sex Dungeon, can comfortably be thrown on a six weight by most competent casters. 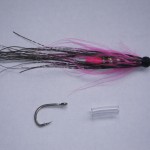 Another often quoted advantage of tube flies is that since the hook is not an attached part of the fly itself, in the event that it gets dinged on a rock, or rusts, or bends, you’re not in the position of having to accept the loss of the entire fly and its materials; you simply change out the hook and keep fishing.  Considering the cost in both money and time that goes into some of the patterns we fish in these larger streamers, that has come in handy already on a number of occasions.  Additionally you can experiment with hook size for a given pattern without tying several 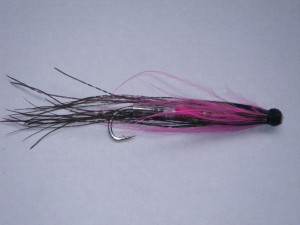 examples of it in order to do so. Storage also becomes easier with tube flies.  Since they are hook-less until rigged for fishing they can be carried in just about anything, even a Ziplock bag in your vest pocket, which leaves the only necessity for a fly box being a very small one in which you can keep your selection of hooks.  I actually carry my tube patterns in a sort of envelope which was made for the storage of CD’s, allowing me to flip through the selection like a book.  And since there are no hooks in this container, re-storing wet flies there when the time comes to change patterns is never an issue.

One of the things that surprised me most though, when I first got started, was how much the spatial geometry of the tying process itself was changed by the removal of the hook bend and point from that equation.  It was like suddenly going from trying to row through a narrow canyon only two inches wider than my oar-span, to being in the middle of an ocean with a motor on the boat!  All 360 degrees of the space around the fly-center was available for the manipulation of thread and materials, with no sharp or obstructive objects in the way to impede my fingers or my imagination. It took me a little while to get rid of the ups and downs in my concepts of what a streamer should look like, but when I did, things came full circle, so to speak.   And the results that rendered on the water spoke volumes. So – what does this all look like?  Basically the parts and the process are like this:

Tubes:  The tubes themselves come in a variety of materials, diameters, and configurations, and a decent selection of these can be found on websites like Canadian Tube Flies,  Fly Fish USA, and TubeFlies.com, among others.  I prefer the semi-rigid plastic tubes which I can cut to any length I want and then prepare for tying by burning them slightly on one end to create a “lip” for the thread to sit up against like a stopper at the flies head, where you eventually whip-finish or cement when done tying.

Dowel or Vise Adapter:  There are a number of “setups” for converting fly tying vises into tube fly tying vises on the market, but after having purchased and discarded several now I offer the following simple, cheap solution.  I use allen-wrenches of various diameters (matched to the inside diameters of the tubes I am working with – see photos below for what this looks like), which I then wrap in a layer or two of tying thread.  This solution prevented me from having to purchase a special steel pin in every diameter I might tie tubes with, and also solved the problem of “freeze” that can occur when you’ve tied a tube fly with a bit too much thread tension and then find that you can no longer remove it from the dowel.  I’ve never had that happen with the thread-wrapped allen wrench solution, and find that the ease of use offered by the ability to just clamp a new allen wrench into my vise without the need for an adapter any time I change tubing diameters saves me a lot of time anyway at the bench.

Materials and Patterns:  Beyond the basic set-up, much of the materials used to tie tube lies are the same as for their corresponding patterns tied on hooks.  A variety of cone and bead heads are available that can be slipped onto the tube and seated up against the burned lip for forward-weight, or else a lead or non-toxic wrap can be run up the shank before the flies body is added, just like when tying on hooks.  Pretty much any existing pattern can be tied as a tube fly, but I am unsure of the advantages (if any exist) of trying to create smaller dries and nymphs this way, and as such tend to limit my tube-tying to streamers.  Patterns can be found online through a variety of websites with the obvious search criteria, but tend to focus mainly on salmon and steelhead patterns still.  With just a bit of creativity though, you’ll find that any of your favorite patterns can be tied as tubes, with the added advantage of stacking-scalability and better symmetry added into the mix. What follows are some photos of a few of the patterns I’ve worked up over the last few days getting the CD cases ready for opening day on November 1st, and a single thread of step by step photos showing the process of what it looks like to create one of these buggers.  I hope you all enjoy!  Feel free to write if any of this happens to pique your interest and you have questions. 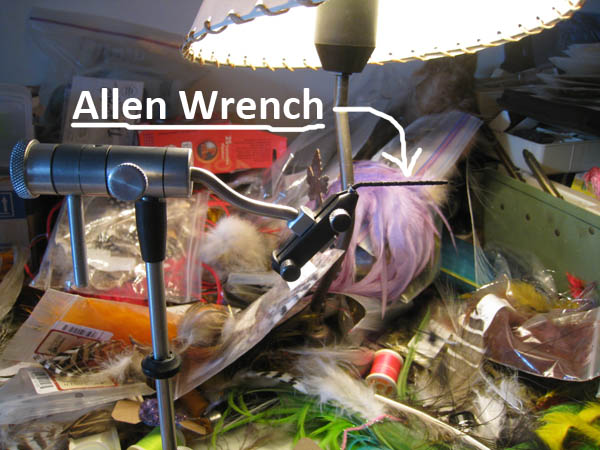 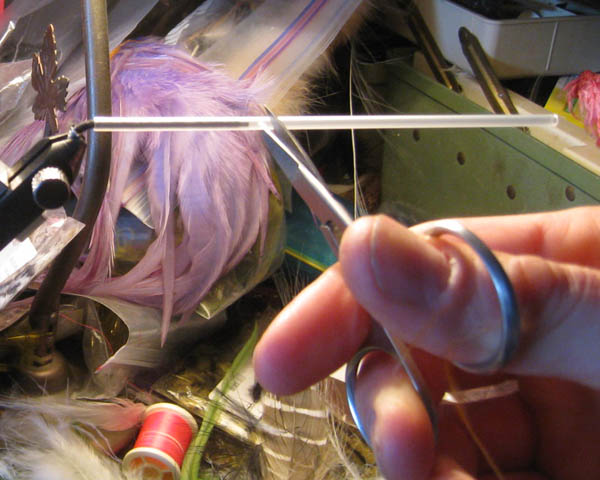 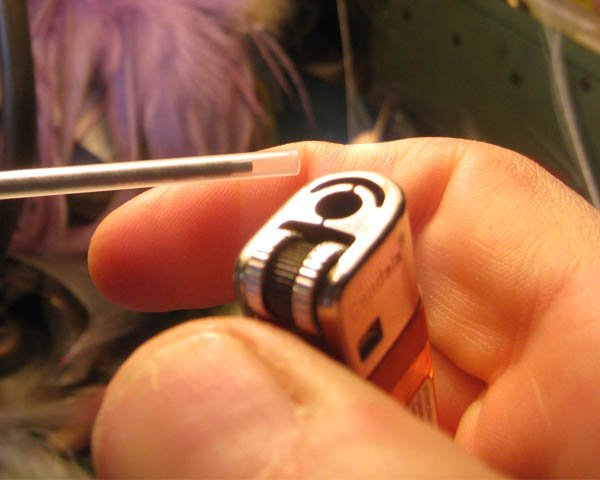 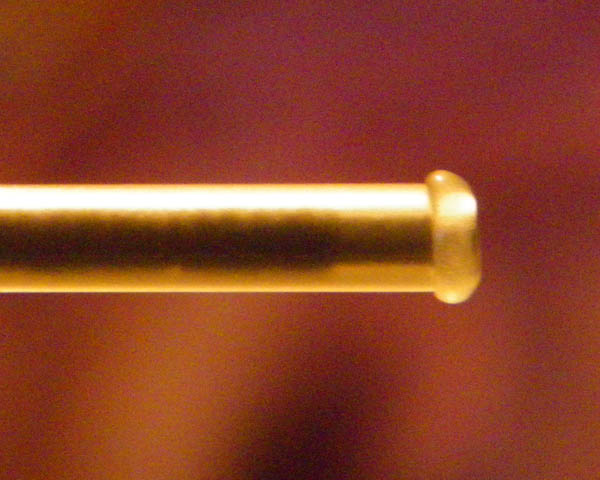 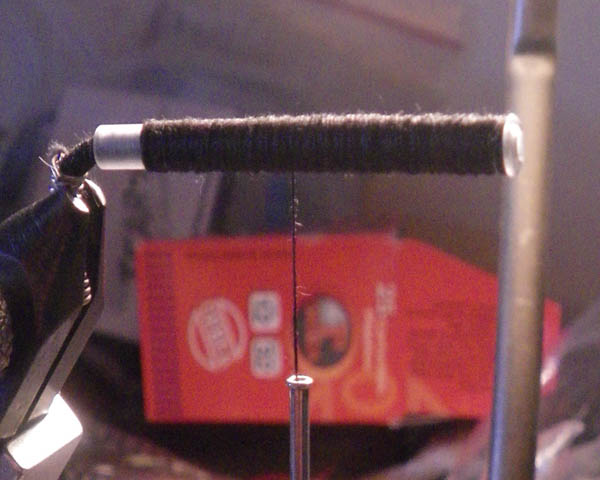 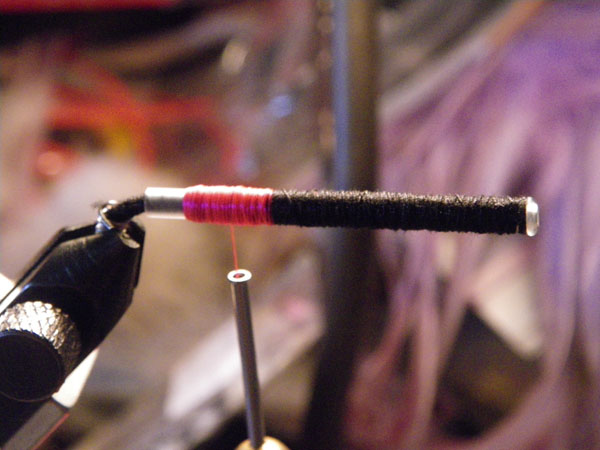 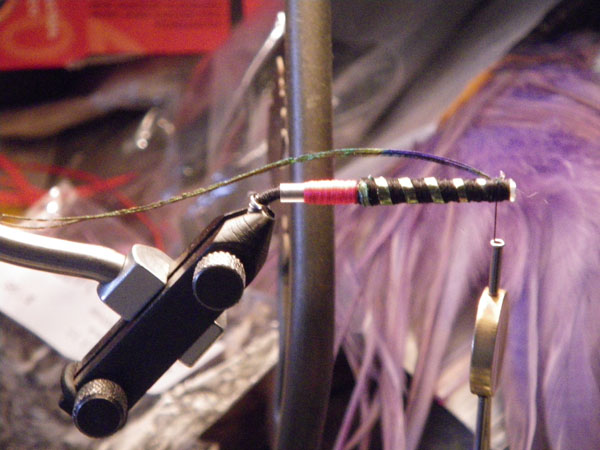 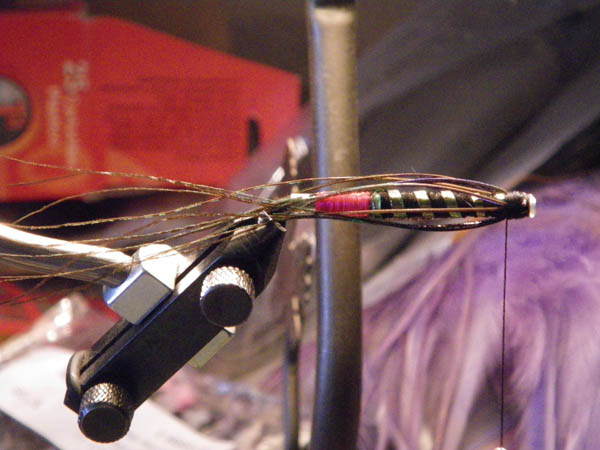 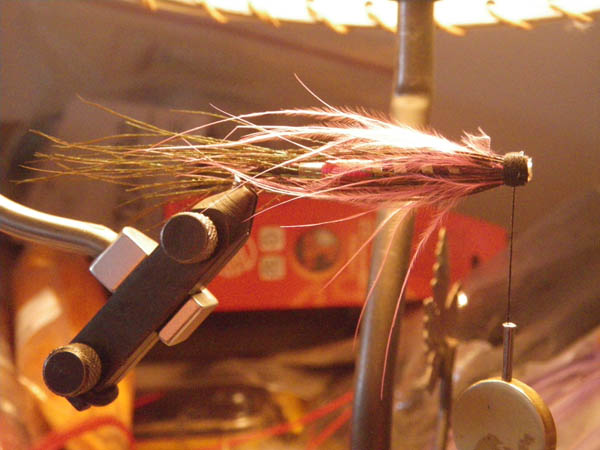