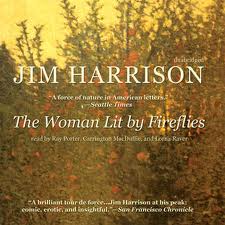 Well, here we go again; perhaps this will become a habit.  But this week's book deserves it too.  One of my clients from back in January graciously left a copy of Jim Harrison's The Woman Lit By Fireflies with me when he flew back to the states, and expressed surprise that I hadn't already read it.  He and I talked quite a lot about books and writing while he was down, and I guess he must have gotten a pretty good sense of what my tastes are in these things, because my first thought upon finishing this book was "Why have I not heard of this man before?"  Turns out there's really no excuse.  Harrison has been on the scene for a very long time, is published in no less than nine languages, and was awarded both the National Endowment for the Arts, as well as a Guggenheim Fellowship.  Not to mention he is a close personal friend of one of my long time favorite authors, Thomas McGuane.  This book is made up of of three separate stories, each really a novella in its own right, and they span a wide breadth of characteristics even though I think they go together quite well as a collection.  The first story I loved but didn’t take that seriously, since I don't think it was intended to be taken that seriously. I just sat back and enjoyed the hell out of the ride. Harrison's voice in this piece, Brown Dog, is vaguely reminiscent of some of Larry Brown's writing in Big Bad Love.  The second story, Sunset Limited, was fascinating from a character development point of view, but somehow fell short of its mark for me in the end. Overall it was very well done and held my interest, but somehow didn’t quite manage to maintain my willing suspension of disbelief.  Still, well worth the time it took to read the thing. The third story, the title piece, is absolutely amazing. What Harrison has done here with the seemingly (at first glance) barest threads of a narrative arc – an exceptionally average woman’s running off from a highway rest stop and into a cornfield to escape her abusive husband and take back the steering wheel of a life left on auto-pilot far too many decades – is frigging brilliant. There are far too few authors who are able to turn reality into literature, but this story shows that he is one of them. For most of writing’s history the tendency of those with the pens and typewriters was to leave the complex mess of bad decision making and twisted up unclear motives out entirely, portraying only a character’s noblest, or least noble traits in order to allow the storyline a clean and concise narrative arc. Then, when writers got more honest, there was an entirely overdone movement in the opposite direction, with the focus put on contradiction and confusion, and leaving it at that, for which the stories also suffered. I think the truth of human experience though is a little like a cross between our clearest moments of calm, rational thought, and the sort of free-flow formlessness we experience in our dreams. There are connections, and the thing itself is a whole, but it can be looked at either way, or from either angle, at any time. The sum total of any character’s true identity is sort of like an electron, which, as described in Heisenberg’s uncertainty principal, we can only ever observe or describe in terms of either the thing’s position or its velocity at any given time - never both at once. What Harrison managed to do with his protagonist in the last story here was both, at once, or perhaps by switching back and forth so rapidly, repeatedly, and invisibly throughout the narrative that the reader never realizes it is happening. And I am certain this took a lot more work and gumption than the average reader ever even realizes; although admittedly, this is beside the point.  Overall though it is another book I would highly recommend, and I myself am looking forward to hopefully receiving a large shipment of Harrison's other works as soon as they can make their way to my tiny post office here in Argentina.