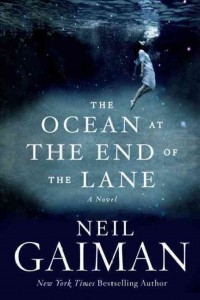 Just in case the review preceding this one wasn't quite glowing enough to motivate a purchase, then here, gentle readers, is a book you simply must get ahold of: The Ocean at The End of The Lane, by Neil Gaiman.   An author I had heard of previously? - no. An example of one of my usual genres? - no.  An excellent use of the five hours it took me to devour the thing - YES, and beyond that a million and three quarters times around the world.  How this book ended up in the stack beside my bed is a whole other story of its own, and one I'd be happy to tell if we have coffee sometime soon, but suffice it to say here online that once I picked the thing up and started reading I had nothing but thanks for its placement in my hands.  It was one of those things just like Avatar (also way outside my usual genres) that for whatever reason I seemed to be subconsciously avoiding for a long time, but it just kept coming up.  A fairly recent appearance anyway, the book was released just this past June and immediately took its place as number one on the New York Times' bestseller list.  So perhaps I am late (not exactly shocking considering I have been in Patagonia these last three years), and you have already read it.  The story begins simply enough, with a fellow who has a few hours to kill between his father's memorial service and the wake that is to follow.  He begins driving, in what seems to him to be an aimless direction, and ends up setting in motion a series of events and recollections that span the gaps between every deep theme and experience ever ascribed to human existence, or really, existence, in and of itself.  If you are a psychoanalyst, the context is there; if you are a physicist (quantum or relativistic), the context is there; if you are an illiterate shaman who someone reads the story to in a Yurt on the high steppes of Mongolia, the context is there.  And apparently, given the novel's sales record, if you are none of the above but instead one of the millions of other possible types of people who inhabit this Earth, the context is not only there, but also easily accessible, attractive, and offering itself to be explored.  The story takes turns more fantastic than I can describe, but at least this reader's willing suspension of disbelief never even thought about wavering, not only because that would have required a pause which might inhibit my rapid and transfixed turning of the pages, but also because the entirety of its narrative arc is somehow just so,.. intuitive.  So read it.  And be sure and let me know what you think once you've laid hands on the thing.  I'm all ears.