April 7, 2010
The Long Walk
by Administrator

I guess I won’t try to compare it with The Long Walk from Northern Siberia down to India, 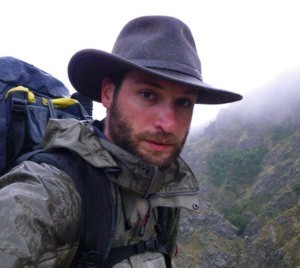 but I will say this: the Rio Corcovado passes through a lot of country on its way from Lago Vinttner to the Chilean border. Unable over the last several years to find anyone in Esquel, Rio Pico, or the town of Corcovado who could describe for me the whole path of the river’s course, I decided this year to just walk it and see for myself what was out there. Now, having done so, I can say with some certainty that my questions were mostly unanswerable anyway, at least within the space of a short conversation or, as it may be, a blog entry posted online. The river is long. It winds its way through Estancia Tecka and down into the canyon above Estancia Poncho Moro putting on a thousand different faces along the way. At times it is almost unrecognizable in comparison with the easily known brook trout structure just below the boca or the long stretch of king salmon and browns between town and the frontera. It is, I can now say, easily the most diversely structured river I have ever known anywhere in the world; and it is immensely impressive and beautiful for being so. It rained on me almost the entire trip, (I even heard my first thunder ever in the region) and between the water in my waders and the sometimes more than twenty miles a day that I walked my feet became blistered and sore to an alarming degree. I did not do as much fishing as I would have liked, but I took a lot of photographs and marked a lot of interesting waypoints with the GPS. I saw no one the entire time. It was a long walk, wet, and cold, and tiring, but I am glad I did it (an easy thing to say from the comfort of my recliner in the kitchen in Rio Pico). Now I just have to get my feet healed up so I can get back out and do some fishing.