May 12, 2011
THE EPIC POST – A Cattle Round Up, Fall Fishing, Futaleufu Rafting, Petrified Wood, Wool Trimmage, Mushrooms, Floating the Limay Medio (big Brown Trout Included), and last but not least, a Joke
by

Hi everyone; sorry once again for the long-time-no-update. Things have been pretty busy down here since my last post, and I'm just now getting back into the office and settling down for the long-haul daily grind the rest of this winter will require. I headed back down to Rio Pico not too long after my last post, spending a few days out at Paulino's Corcovado boca camp where I did very well fishing the early morning and late evening hours, and had fun watching Truco and hanging out with the crew in between. I also did day trips from there on my own, 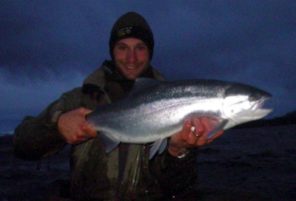 exploring some exciting new out of the way streams and lakes, some of which proved to be excellent quality waters which we'll incorporate into our programs for next season. The autumn colors continue to be spectacular, and the weather has been pretty nice most days.

While out on Lago Vilches in Estancia Tres Valles one day my good friend Tizo happened to mention that he had lost some cattle in the high country on another nearby campo, and would be looking for them the next morning to bring them down. I asked him if there was any interesting looking water in the area where the cows were, and he said that in fact there was, but he was not sure whether or not it held trout of any size, then offered to take me along on the ride. I accepted without hesitation, and we tacked up early the next morning and headed out with our lunches and a rod tube in my backpack, and the dogs (including Negra) running alongside. 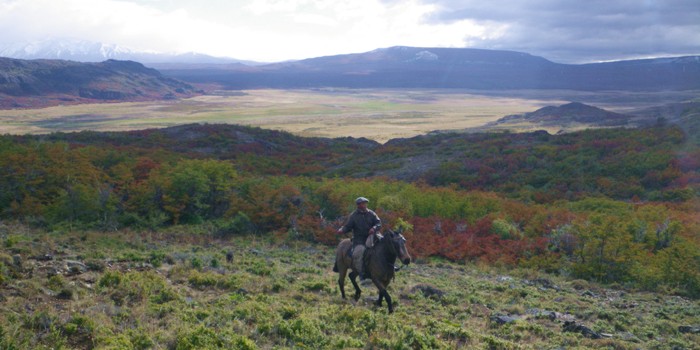 It was a work first type of situation, and I knew that, but what I didn't know much about was how to do the work. Luckily my horse however did, and we found the first of the cattle mid-morning in a tightly wooded draw at some elevation.  The running of cows through the placement of a horse, and direction of intention, is an interesting process. 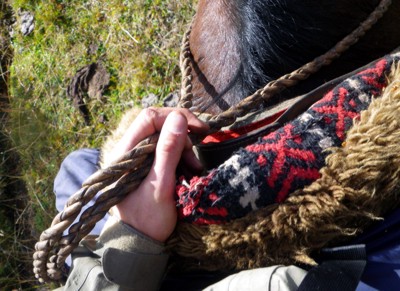 My horse, a gelding of around fifteen years’ age, was an expert at this type of work, and most of the day seemed more like a machine to me than a living creature. He could somehow sense what the cows would do next, also seemed to somehow know what it was in fact that Tizo wanted them to do, and would act accordingly in all cases – sometimes despite the idiotic and contrary actions of his rider (me). In fact, that was the only way in which my horse displayed anything even vaguely close to a characteristic of personality. Whenever I would do something stupid, or fail to understand what it was he himself was trying to do, he would stop and crane his neck around to make eye contact with me, as if to say, "Who are you? Are you an idiot?" It was a humbling experience, to say the least. But so much fun!  This country up high above the rocky ridges is so rough and un-traversed, it amazes me that the horses do as well up there as they do. They crash through the underbrush like bulldozers, recover from stumbling slides across loose rock like ballerinas, and jump pretty much whatever else gets in their way, including log jams, deep rock fissures, and fences. 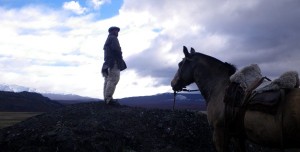 It is amazing, honestly, that I was able to stay on the animal at all.   Once the cattle were collected though, thirty-three of them in all, and deposited in a place that we could easily find them later on in order to drive them to the lower country and deliver them to their winter digs, we continued to climb until we reached my other objective, a high, hidden lake that has no name. I won't go into to much detail, even though the access issue makes it almost inconceivable that this place might end up receiving any real pressure any time soon, but I will say that within three casts I was into a fish that made every hour of the ride to get there feel worthwhile, and that the next few hours I spent there followed that lead.  Eventually though, I had to tear myself away from the water and break the rod back down into its tube for the ride home, during which time I learned a little bit more about the driving of cattle than I had understood that morning, but not nearly enough to start thinking of myself as some kind of Yankee gaucho. 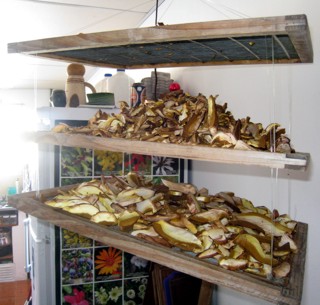 My next trip south sent me down through Estancia Tecka, which we are adding as a destination next season for our guests (Patagonia Unlimited website update will describe this soon. Tecka is one of the largest, if not the largest estancia in all of Patagonia, and home to most of the Argentine flow of the Rio Corcovado, all the spring-creek headwaters of the Rio Tecka, and a lot of other interesting water and land. I went from there back down to the boca at Lago Vintter, then East to some of the newer waters I'd recently seen which begged for further exploration, and ended up one day collecting more than a hundred pounds of edible mushrooms on an estancia before helping the gauchos there wrestle sheep for several hours, trimming wool away from their eyes to prevent them from going blind over the winter as it grew longer and covered them completely.

When I got back to Esquel we peeled and sliced the mushrooms, then I built a rack above one of the heaters out of some extra bee-hive screens from the basement, and the whole harvest got reduced over a period of days to around a kilo or so of dried, preserved, and deliciously edible product. 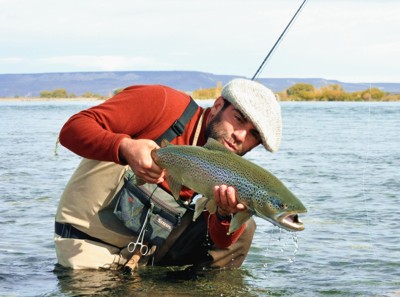 Then it was off to the Limay Medio, the same stretch of river I floated last May that stays open until the end of the month and fills with very large migratory brown trout from the lake below, again, as last year, with my good friend Emiliano Luro.We had quite a bit better weather this year than last, and also managed to find better campsites, complete with plenty of firewood and level ground, and the fishing was quite good as well despite higher than normal water levels all three days.  I found my very first piece of petrified wood amongst the stones where we stopped to eat lunch one day, and photographed one of the most beautiful sunrises I have ever seen in my entire life. After the takeout we went up and camped one night on the Caleufu, which neither of us had ever before fished, and found both decent browns and tasty percas, as well as another first for me, a herd of Ciervo Colorado, aka European Red Stag. We also saw one wild boar.

Last, but not least, after my return to Esquel, I did a float with the Club Andino down the Rio Grande (Futaleufu) from the dam outside Trevelin through Los Alerces National Park and almost to the Chilean border. My friend Ivan and his family live in the park ranger outpost just this side of the line, in a really neat old house right on the river which is surrounded by old, productive fruit trees planted many years ago by the property's original owner. We collected baskets and baskets of good apples (I could have filled the whole bed of the truck up if I hadn't had the boat) which I am now drying on the same bee-hive screen rack where I did the mushrooms. I would have about a ton of the things put away by now if I could only stop eating them; they're so good right off the dryer that it's hard to accumulate any stock! 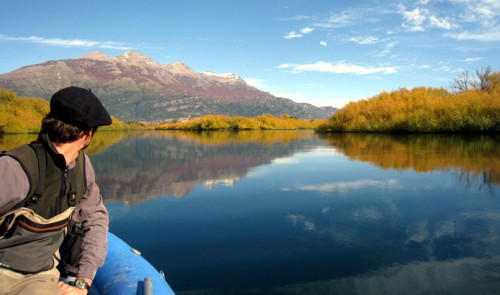 And on that note, to close, I would like to relate a joke that was told to me recently which I think is quite prescient to our times, not just here in Patagonia but in the world at large.  It goes like this: In a small town somewhere in southern Argentina, where not much good had occurred in the local economy for quite some time, one day a foreigner walked into the only hotel on the square and requested a room, plopping a fifty peso note on the counter before receiving his key and retiring up the stairs. The hotel owner, too honest a man to let temptation get the best of him, ran immediately to the local laundromat where he'd been racking up an account on credit for quite some time with the cleaning of the hotel bed sheets, and handed over the entire fifty pesos. The laundromat owner, in turn, ran directly next door to the meat market, where she had a debt that was far past due with the butcher, who received the fifty pesos with a grin. He then walked two blocks over to his home, where the village carpenter was in the process of packing up his tools to stop work on the butcher's roof, since he had not been paid a dime in several weeks. Suddenly finding himself in possession of fifty pesos, the carpenter had no choice but to stay and finish the job, but decided that first he would go and use the money to pay off his own debt, one he had been carrying for far too long, with the village whore. But the whore had her own debts to pay, since she'd been using a room in the hotel on credit for her encounters since the first of the year, and so she walked proudly back in there plopping the same fifty peso note down in front of the hotel owner, who had only then just returned. At that very moment the foreign tourist came back down the stairs, proclaimed he didn't like the look of the room, grabbed his fifty pesos up off the counter, and stormed out! 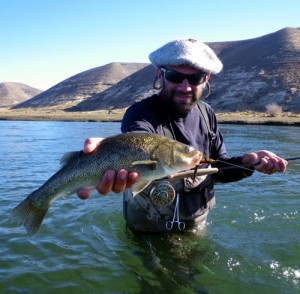 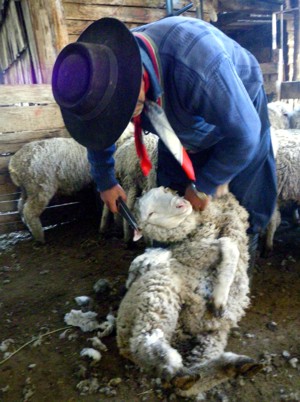 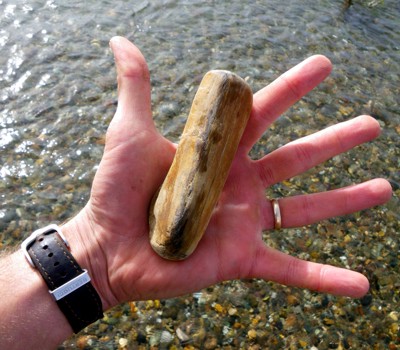 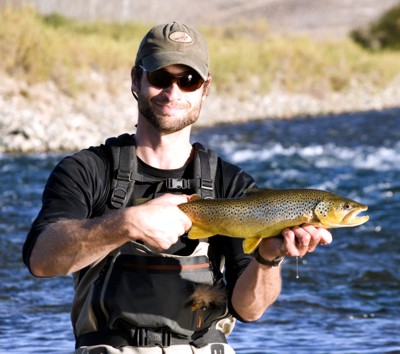