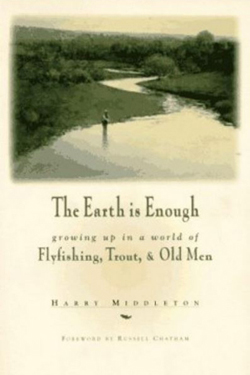 I'm not much on reading the "comments" and marketing-speak on the outside covers of books, or on anything for that matter.  In fact, when I get hardcovers, and I get a lot of them, I throw the dust jackets away right off the bat.  I just don't like the things.  But last week when I was scanning the dregs of my unread southern hemisphere stack of books the name Ted Leeson caught my eye, quoted on the back of a book that wasn't his.  Leeson is an author I respect.  And so is Annie Dillard, who also had a quote on the back of the book.  "Hmmm...  This one's been sitting here for quite a while", I thought, as I picked it up and flipped it back and forth in my hands.

I'm not sure why I had avoided Harry Middleton's work for all these years.  But I had.  Two of his books have been sitting in the stack since at least 2007, and I just always skipped over them  in lieu of something else.  Looking back on it I believe this may have been partially because I had somehow gotten it into my head that the man committed suicide, a detail of personal histories which generally turns me off.  Turns out that's not the case though.  Middleton died of a brain aneurysm, just like the one that nearly killed me back in 2002.  But back to the point.  His book.  I'm going to go out on a limb here and say that The Earth is Enough might just be the most grossly under-appreciated work in its genre to have been published in the last fifty years.  Russel Chatham, who's introduction to this book appears in my addition, describes a similar experience to mine when he says "I discovered Middleton later than most, a function of my suspicion of all things new, especially books, and especially squared books of fiction or books with fishing in them. I was aware of this author, but put off reading him, a gesture not unlike circling a sleeping rattler for several years."  I would agree with that, and the book's all too true story has no trouble making that rattler dance.  It isn't a story about fishing, regardless of what the cover says.  In fact, there is hardly any fishing in the book.  Thank goodness.  Because the question that its story does in fact tackle is a big one, maybe even the biggest of them all, and while I'm not much on believing that anyone has made too much progress in answering it thus far in the rather sordid path of human history, this book is sure as hell up there with the better shots that I've seen made.  I'll leave it at that though.  I'm tempted to include some of the lines that I highlighted as I read, but flipping through the pages I realize now they are too many, the prose, in style and in substance, is just that good.  Read it yourself and let me know what you think.