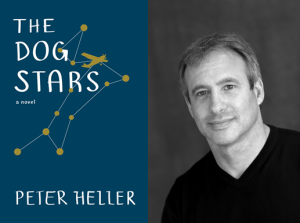 It is hard to even think of Peter Heller's book The Dog Stars without also calling to mind Cormac McCarthy's 2006 masterpiece The Road; and this is unfortunate.  The Dog Stars is an excellent book and should be allowed to stand on its own.  Apparently the folks in the marketing department at Vintage don't think so though.  Once on the back cover, once on the quotes inside, and about four million times in the media through PR campaigns, they make this unfortunate comparison.  And to be honest, I think it unfortunate because while Heller's book is very, very good, even combining the two into a sentence makes it read something like "and that wind we had three days after the tornado was pretty darn strong too!"  Ha. But seriously though.  This book is worth a read.  Post-apocalyptic-nightmare novels have been somewhat in vogue for quite a few years now, and while I think some of them, like José Saramago's utterly worthless Blindness are a complete waste of time (Noble Prize notwithstanding), The Dog Stars manages to rise above the fray.  Part of what sets it apart is Heller's past-tense use of a particular American generation's pop-culture icons to set his dreary, if exciting scene.  The story is your basic super-virus kills almost everyone, a few survivors wander the Earth eating each other and killing each other and blah, blah, blah,.. But something about Heller's protagonist, Hig, is pretty different in his approach to the delicate balance between mourning and making sure he continues to exist.  I mean, he fly fishes, so - I'm into it right there by default.  He also flies a plane and has a dog and published poetry while working as a contractor in the building trades.  These are things I can relate to.  Some of the era-specific culture references are probably a bit too specific, really, for the portion of his audience that is over the age of say, fifty, but for the rest of us these details create a resonance with what is probably the book's most important setting characteristic - a sense of irreversible loss, at an utterly incomprehensible scale.  That having been said, hope and the supremacy of Love are ideas kept alive, at least by some of the novel's characters, and while the book ends inconclusively with regard to circumstantial outcomes, the message is still clear.  So get a copy and give it a read; then let me know what you think when you get done.  I'm all ears.