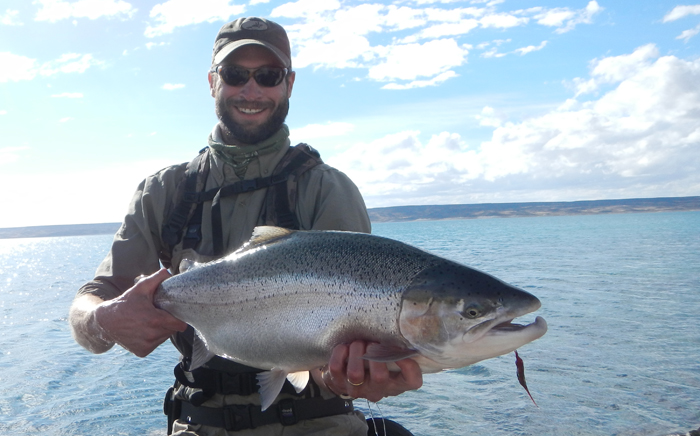 Hi Folks; back again for another installment.  I’m in off the water for just a skosh here between groups, and re-grouping, as they say, in the office, yet again.  It’s been a pretty spectacular last couple of weeks down here.  I started out down on Lago Strobel where I actually managed to sneak away for a bit of fishing on my own before the sports came in, and also spent a day out on Estancia Laguna Verde searching for Tehuelche artifacts and “paintings”. 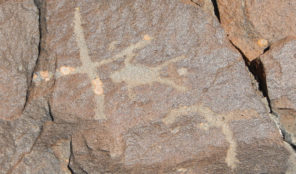 Paintings probably isn’t the right word for what we have on that particular property, since in fact they are etchings, the actual images carved into the rock with other rocks, but many of the styles and forms are quite similar to the paintings found just a little ways to the North on Estancia  Cueva de Las Manos and in other sites across Santa Cruz province. 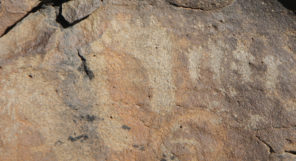 These things always make quite an impression on me, and so I’ve decided to devote a little time here to describing them, as well as to sharing the rest of the small collection of Tehuelche bolas, stone tool and arrow point chips, and other generally interesting (to me, anyway) rocks and fossils I have seen or collected down here over the past five or so years as I walked around mostly looking for fish. 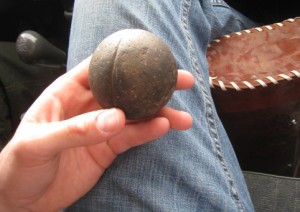 The first of these was a bola that was given to me by a fellow outside Rio Pico, which I was amazed to later find out from an archeologist who recorded it for her database was actually over nine thousand years old.  Bolas, more or less perfectly spherical stones crafted using other stones by Tehuelche hunters (some of them with a groove around the circumference and some without) were a sort of primitive weapon used to hunt guanaco and rhea, among other things.  They were tied to short woven leather lines, sometimes also wrapped in rawhide, and then swung around the hunter’s head before being released with a trajectory intended to hit the target animal and crush enough bone to bring it down, or in the case of multiple bola boleadoras, wrap and tangle the cords around the animal’s legs.  It is hard for me to imagine how much work must have gone into the making of these things, and even equally amazing to me that there should ever have been enough of them “lost” by the Tehuelches that I might somehow come to have three of them (well, two and a half) sitting on a shelf in my house all these thousands of years later.  Just holding one in your hands and thinking about the fact that at the time it was made even the people of Europe were still also in the stone age makes quite an impression on me, and also calls to mind that in the millennia that followed, the Tehuelche simply continued to live in this same form - all the way up to, in fact, their first contact with the by then more modernized Europeans only a few scant centuries ago. 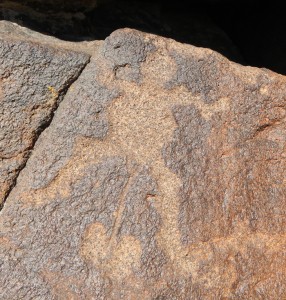 They were a nomadic people, hunter-gatherers by way of life, and judging by the artifacts like these bolas and spear points and the paintings and etchings themselves, it seems that for well over ten thousand years they lived in very much the same fashion, with the same culture, and little or no change at all took place in their way of life over all that span of time.  Contrasted with what those peoples who experienced the agricultural revolution across the Atlantic have done over just the last three thousand or so years (going from much the same way of life as these Tehuelches to the sort of horrifyingly beautiful mess of things like fly fishing, nuclear weapons, and reality TV programming that we have today) it makes me wonder a little bit sometimes: how and why did this all actually come about?  The paintings and etchings tell us a little bit about what Tehuelche life was like for the thousands of generations that they existed here in this form.  There are guanacos and rheas, renditions of these same animals’ tracks, images and negative imprints of the people’s hands and feet, images of women giving birth (like the one seen above), images of hunts, and interesting but inexplicable circles and geometric forms of all sorts, possibly astronomical in nature, but equally possibly not. 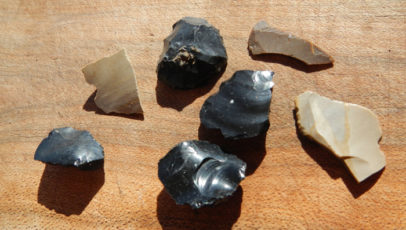 What there are none of, however, are images of war. And this contrasts markedly with the Egyptian hieroglyphs and other vestiges of post agricultural-revolution Arab and Eurasian cultures we all know.  Some of what I found a few weeks ago was recent enough to be accompanied by the still preserved (though by no means fossilized) bones of the animals the hunters had killed.  Chips of obsidian scattered behind “blinds” constructed of stone were amongst piles of guanaco ribs and legs, indicating that as little as maybe one hundred and fifty years ago hunters had crouched in that very spot, making arrow points and waiting on their prey, then perhaps processing and eating it there as well.  And at the same time, five thousand odd miles to the North, our American ancestors were engaged in a bloody civil war complete with canons, muskets, and the newly developed Henry repeating rifle.  It is a strange world indeed. 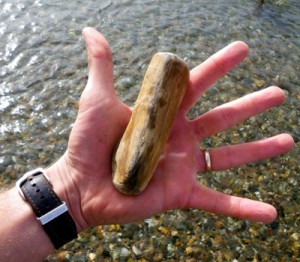 It hasn’t been just items of human making that have caught my eye since I’ve been down here though.  There is a lot to be seen amongst the stones at river and lakeside that goes far further back in time than that.  You may remember from sometime back in May of 2011 this piece of petrified wood I found on the Rio Limay, a vestige of a tree that stood on those plains during the Mesozoic Era, which came to its end some sixty six million years ago.  Or how about these fossil imprints of bivalves I found just a few weeks ago on a nameless river drainage I was exploring to the south.  Or this giant fossilized oyster shell from the Rio Jeinimeni that weighs more than thirty pounds. 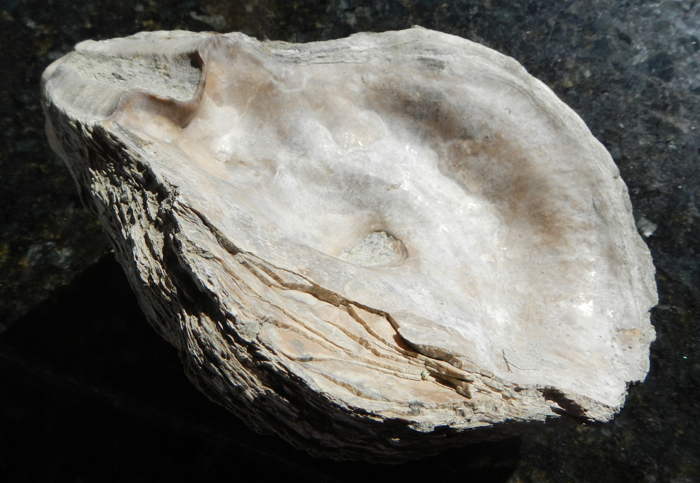 Who the hell knows what they are?  Or how old?  The stone with the clamshell imprints was in the midst of a myriad of other types of stone, pushed into the place it lay by the last glacial retreat I would imagine, but I’ve not yet had the opportunity to ask someone better educated in these matters than myself and thus find out.  I move on now though, to the beast of all beasts, and one that thankfully also rests in my tiny collection, the mighty dinosaur.  Yes folks, I have dinosaur bones.  Or, well, fossils, actually, but damn if they don’t look like bones.  Only heavier. 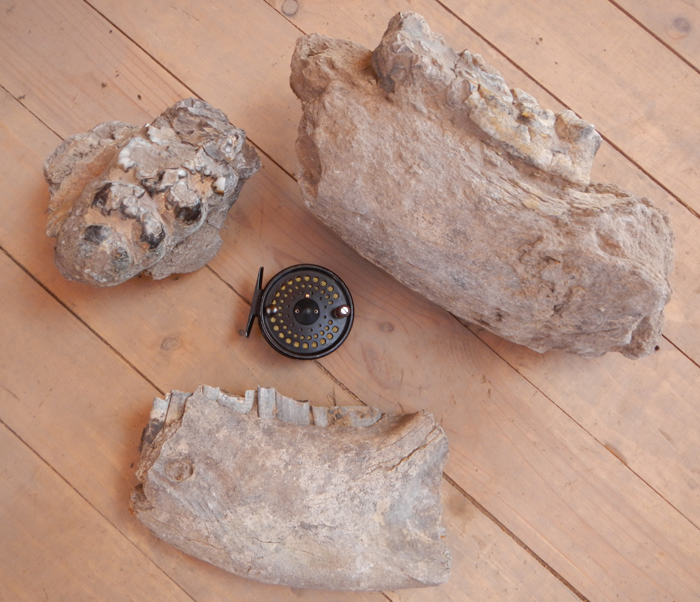 These segments of jaws (complete with teeth) and the leg joint below belonged to a creature that apparently (according to the museum up in Santiago del Estero) looked like a sort of triceratops with the horns in reverse.  It had two huge tusks coming out of its mouth and extending almost straight forward, elephant style, but also a unicorn like horn sticking straight out of the protective plate that extended from its head.  They have a complete skeleton at the museum there, and the thing is about twenty five feet long and probably twelve feet high.  All I can say is that I’m downright thankful to live in a part of the world where it is possible to just stumble across this stuff.  And when you do, well, it really does make you stop and think. 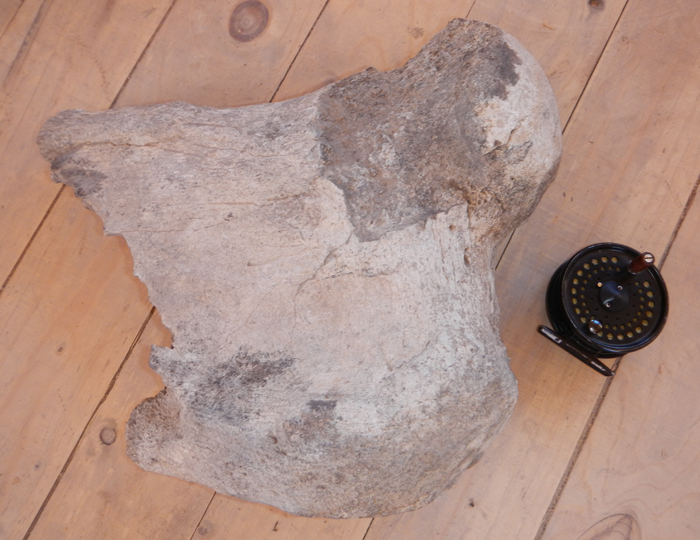 But now on to the fish.  I know you all want to hear about the fish.  Fishing has been good and my last group had three and a half days of spectacular weather down on Lago Strobel with Tweed and Alfredo and the boys before me and the clients headed north to Rio Pico for the rest of the trip. 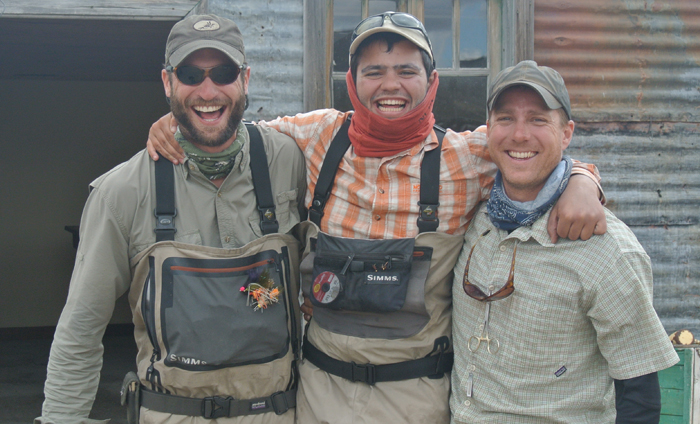 The wind though, was acting strange.  Now, I’m no Paulino Arias, and the number of my years of climatological observation in these parts is a fairly limited, at the geologic scale of time – but I know one thing:  The wind here comes from the West.  I can count the number of times I’ve seen wind out of the East in Patagonia on a single hand in fact; that is, until this last two weeks I could.  It started while we were still in Santa Cruz. 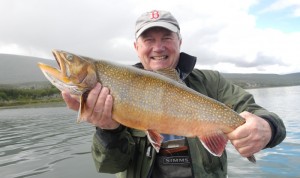 Tweed had one of the clients on his four-wheeler and I was behind him with another when I noticed something strange.  The dust coming off of his tires was going the wrong way.  I honked to pull him over and we both remarked on how strange it was, but I certainly didn’t expect it to last.  Last it did though.  Off and on for the next week and a half.  Why should this interest you?  I’m not sure.  I’m not yet sure even what it means to me.  But 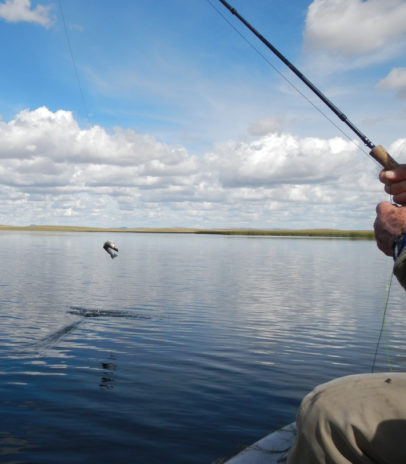 I do know what it means to the trout in my area of expertise, and it makes them start acting awfully strange.  Mind you, we caught them; yes, we caught them just like we always do – but not in the places or in the ways we always do. The fish just weren’t acting the same.  It is hard for me to imagine how a simple change in wind direction should affect the behavior of a single outsized brown trout lying in a pool on a tiny spring creek in the pampa.  The water flows downstream just like always, the sun and moon rise and set, maybe the grasshoppers get blown into the water from the left bank instead of the right, but how the hell does he know which way they come from anyway, and why should he decide to move his place or do something different than he always has?  Who knows?  But he does.  There’s a lot more going on here than we will ever understand.  It’s like trying to balance an equation with far too many variables and far too few numbers, or find the patterns in that never ending decimal string that is π.  Yet we can’t help but try to systematize the thing, to understand it, take it apart, and examine how it works so that we can make it work to our advantage. 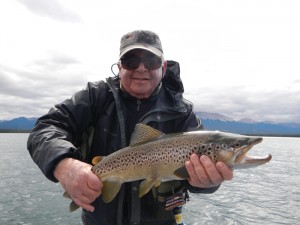 Ivan Sergeevich Turgenev said once in a letter to Lev Nikolaevich Tolstoy dated January 3rd, 1857,  “The only people who treasure systems are those whom the whole truth evades, who want to catch it by the tail. A system is just like truth's tail, but the truth is like a lizard. It will leave the tail in your hand and escape; it knows that it will soon grow another...”  I’d say that about sums it up.

“Tomorrow, the river will look much the same.  But it won’t be.  No two days are ever the same for a fly fisherman.” (Roderick Haig Brown)