September 4, 2012
Still at the bench, sorting flies (spring is on its way)
by

Not much to report here, other than that the snow now comes and goes; spring seems to 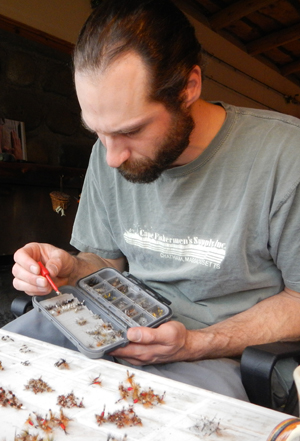 be peeking its head out from around the corner-bush; and the boxes are spilling over with new flies, which has left me resorting yet again to Tupperware for storage.  That's actually not a bad way to keep the tube flies and the Intruders handy though, since neither one fits very well into your standard foam-bottom fly box.

Last week I did my yearly sort-all.

This is the time when I spread every fly I own and every new fly I've tied out across the tables and the floors and any and every other flat surface I can find within the house, and begin categorizing, and culling, and re-stationing them in their places for the season.  It sounds like a simple enough task, unless you've ever done it.  There are literally thousands of the things, ranging in sizes from upwards of twelve inches long down to #22's that you practically need a magnifying glass just to see, and over the years I've been through a dozen or more theories on what the most practical way to organize them should 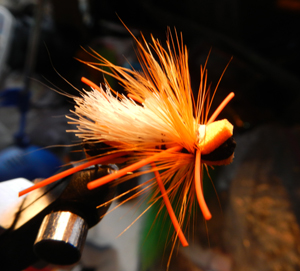 be.  One is tempted to do it by type, and then size, and then color, or some variation of these characteristics, but in the volume that we are dealing with, what that ends up meaning is that you've got whole boxes filled up with flies which are more or less the same.  This necessitates allotting a great deal of space in the day-pack just to carry enough boxes for variety, and even at best there is never enough room.

Another approach is to put just a little bit of everything into each and every box, so that at any given moment on the water you've got handy some streamers, some natural dries, some attractors, a few nymphs, and so on, but the folly of that one is that you almost always have some idea about a particular fly you should be looking for, and invariably if 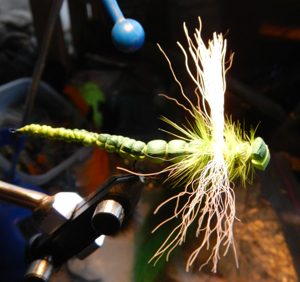 you've taken this approach it is in another box back at the truck when you want it.  My friend Philip once suggested that I dump the whole lot of them into some sort of tumbler, mix them all around for a few hours, and then just grab out handfuls and stuff them into boxes entirely at random, making do out on the water with whatever the lottery allotted me.  I may still come around to trying that one some day.  Last year I decided to simply limit the number of repetitions in any given pattern and color that I would put in a given box, on the theory that one should not often run into situations in which they could go through more than a half a dozen, say, #2 6x Long Shank Green Giants in a given day, and that as long as the Tupperware back-ups were always at the lodge, I could refill the boxes each night as I needed to.  This worked to some degree, but there is still never enough room in the pack.  So, this year I've just ordered a much bigger pack... 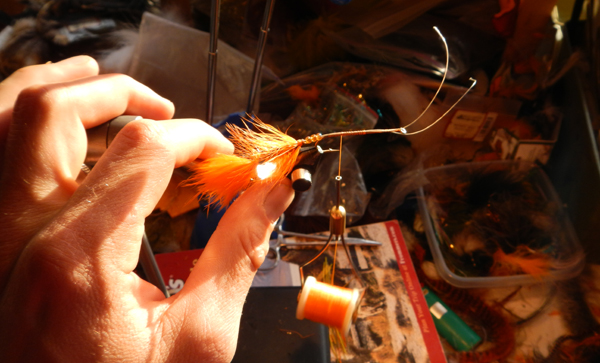 Invariably, and this is what chaps my hide the most, there are certain flies that I pull out of the boxes every year for the sorting, knowing full well that they are of a pattern, size, or style we didn't use a single time the year before.  But also invariably, there was this one time, a few years before, when they were exactly what the doctor ordered in a certain isolated circumstance, and maybe even saved what could otherwise have turned out to be a fishless day.  The things take up space, and I know the chances are I'll be sorting the same exact ones next winter without a single one having gotten wet, but I just can't seem to bring myself to pull them out and set them aside for the season.  I mean, what if?  You know?

So in they, go back in the boxes, neatly realigned and color/size coded - all of them except the throngs of dulled or torn or otherwise use-rendered-imperfect but still well appreciated for their excellent service recyclables (most of which do get recycled these days, into shanks for the Intruders or middle sections for three part articulated monsters), and the whole lot of it gets packaged back up into the boat bag and the day pack and even then there are boxes and Tupperware bins left unfilled and sitting on the bench, so I sit back down and tie some more.  It is as tedious as it sounds, but a good kind of work nonetheless, and I get to drink a lot of nice coffee in the process and hear good music all day to boot. 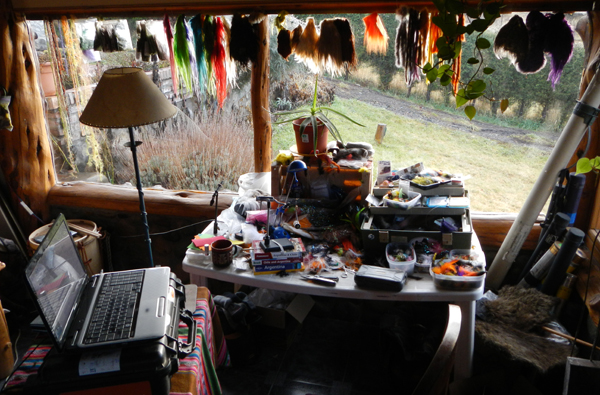 The office of course requires some work as well, but as you can see I have cleverly
combined the tying space and the laptop desk so that a quick swivel of the chair puts me in ready-position for either.  Only downside of this is that every once in a while when in the middle of a conference call with the Syzygy boys I get inspired by some feather just off to my right, and pretty soon I hear Steven saying "I can hear the thread-bobbin squeaking Justin" and have to swivel back around quickly enough to pretend I still know what they are talking about.

"Oh yeah, yeah, the J-query option sounds like a great fix" I say, and he groans. 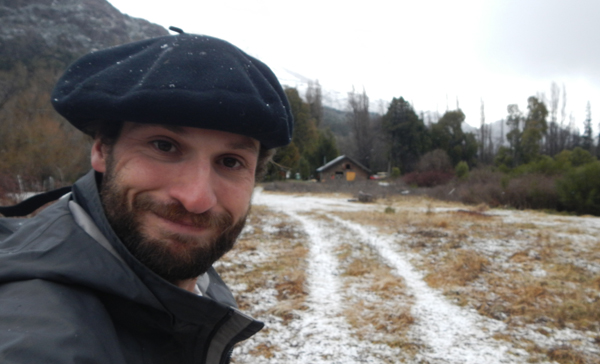 Everyone shoot me the news from up there when you have a chance; if it wasn't for writing these blog posts I think I might forget how to speak English before the winter is over, and I would love very much to hear from you all.