July 8, 2018
Roadtripping in Chile: San Pedro de Atacama and the Surroundings
Чили на Машине: Сан-Педро-де-Атакама и Окружности
by khadizhat
(Читайте русскую версию внизу)
I first learned about the Atacama desert when I was selecting a destination for my vacation several years ago while I still lived in LA. I had to choose between Chile, Fiji and Malaysia. I ended up going to Malaysia and Singapore hoping that some day I would get to explore Chile and its desert in the northern part of the country. 5 years later another travel dream became a reality and I visited not only Atacama, but also many other parts of this long and narrow South American land called Chile. 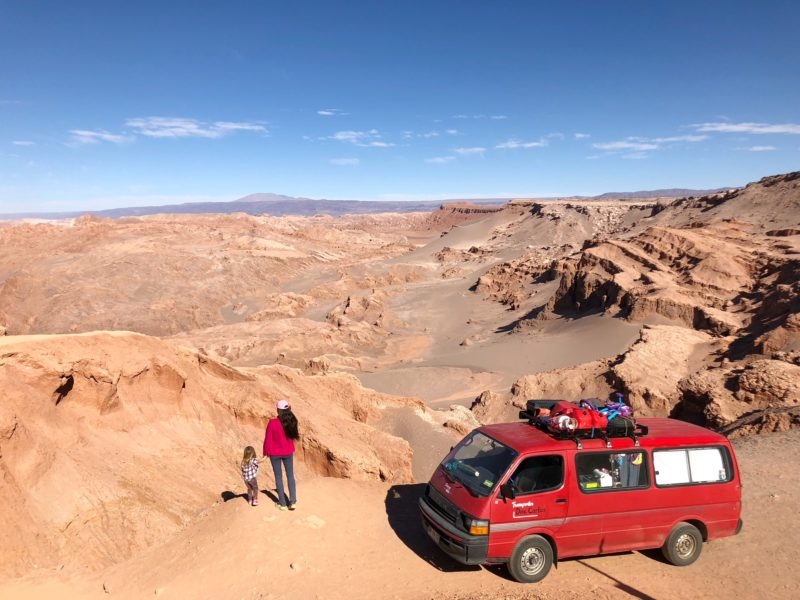 After being on the road for over three weeks in our minivan we arrived in the dry, dusty high altitude desert of Atacama. There wasn't really any specific point of arrival into the desert itself as we had already been driving through it for days with no end of it in sight. I guess what I mean by our arrival is finally reaching the small village of San Pedro de Atacama which serves as a local tourist hub for main points of interest, some of them rather close to the village and others quite far. 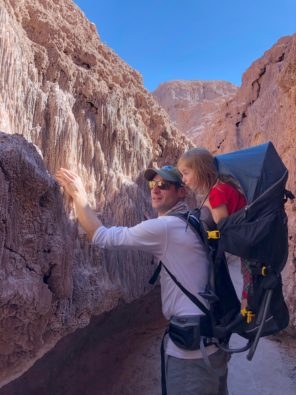 On the first day we went to explore the Moon Valley (Valle de la Luna), a trip that we made by car which took us about 3-4 hours. Every 2-5 km on a road going through the valley there are stops with different attractions. We went to one canyon that by its formation resembles Antelope Canyon in Arizona. Starting as a canyon it later turned into a dark cave. We also hiked to a grand sand dune and a rock formation called the Amphitheater. There were some other tourists from different countries mostly riding their rental bikes in the southern hemisphere's winter heat. I imagine it's nearly impossible to do in the summer.
After a quick lunch in one of the local food joints next to the Feria Artesanal (market with crafts) of San Pedro de Atacama and Aya’s quick nap we visited Pukara de Quitor, archeological ruins of native atacameños located on top of a hill overlooking the town, valley and multiple volcanos in different directions. After that sight we were tired and ready to rest.

Prior to coming to Atakama I had carefully selected the attractions that I wanted to visit.  I wasn't sure however whether we were going to make it to all of them or not based on their proximity to town, the (terrible) road conditions requiring a 4*4 vehicle, and our own well being, mostly thinking about our child, of course. I was surprised that she didn't seem to be affected by the altitude (over 3000+ m above sea level) nor the extreme dryness of the air. At certain points though Justin and I were overwhelmed by the heat, allergies, dust (that could literally be tasted in the mouth), and some headaches now and then.

At the end of the first day we found out from the local people that we might not be able to reach some destinations from my list in our vehicle. Also the decision has been made not to go to El Tatio geyser located high(er) in the mountains, 90 km north of San Pedro. I was ok with that. The remaining sights that were still within our reach gave us a good picture and understanding of topography, geography and geology of the area. 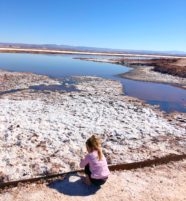 In the morning of our second day we drove about 20 km to Laguna Cejar, a lagoon located in the Salar (salt flats) de Atacama. We needed to pay $25 per person just for the entrance, but learned on the spot that it wasn’t worth it and instead drove to the Laguna Tebenquiche just 14 km away from there. The entrance fee there was less than $3.50 per person and we enjoyed a long walk along the shore of the lagoon watching flamingoes and tasting salt as we moved from one side of the lake to the next. Aya first stayed in her Deuter carrier, but on the way back toward the parking lot she decided to walk. She and I walked barefoot and stopped at different points to look at the formations of the lagoon and to explore salt crystals of various shapes and forms.

We very much hoped that Aya was going to take a nap when we slowly drove back to San Pedro, but it didn't happen. For the afternoon we decided to make the trip to Termas de Puritama (hot springs), about 20 km North of San Pedro on the road that goes to the El Tatio Geyser. We gained more elevation approaching the hot (in this case just warm) springs and it was also going to be a test whether we were up for more altitude and longer distance to actually make it to the geyser the following day or not. 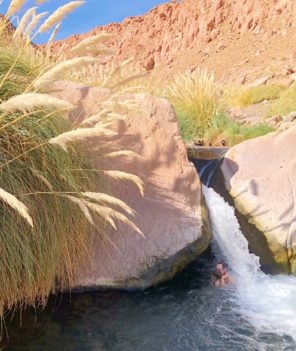 By about 3 pm we were all splashing in the lowest of the 7 pools of Puritama Springs. The water temperature was very pleasant, but once out, the body was covered in goosebumps due to the strong wind. Nonetheless we ran from one pool to the next swimming in as many of them as possible. Aya obviously had a blast learning to stay afloat and jumping in water. Puritama Springs are located in the canyon and once the sun was setting down it was time to get out in order not to get cold.
We ate snacks while driving downhill back to San Pedro. Close to town we gave a ride to a local atacameña lady who was walking along the mountain road since 10 am!!! We were surprised that noone had stopped to give her a ride. After dropping her off we continued with our route in the direction of Calama, made a left turn onto a local extremely dusty washboard road and reached our final destination in Atacama, Lagunas Escondidas de Baltinache (Hidden Lagoons of Baltinache).
We knew that the place was closing for the public at 6 pm and as we were getting near it the guards and other employees were leaving for the day. One of them asked us what we were going to do and told us that we couldn't enter outside of working hours and that a guard was supposed to show up at night to check on us. Yeah, right! We basically rolled our eyes, but responded that we would camp by the place overnight and then enter once the employees arrived in the morning. And so we did. Before going to sleep though we all went outside of our ‘home’ to look at the stars and the Milky Way galaxy. Watching shooting stars and the night sky in the desert away from any light pollution was fantastic. 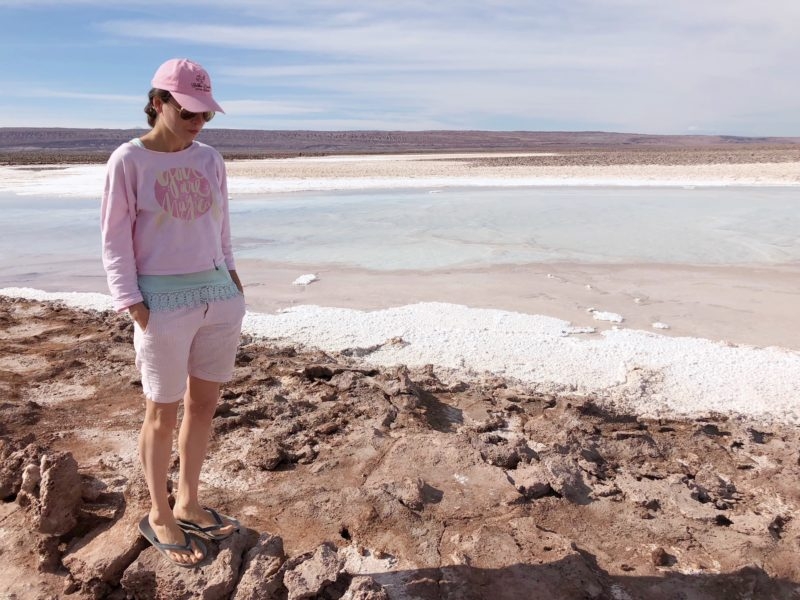 On the next (our last) day in the surroundings of Atacama we saw the real gems of the desert, the breathtakingly beautiful seven turquoise lagoons filled with salt water and the crystals and rocks around their shores. I have seen salt lakes and salt flats in Salt Lake City and Russian Sol Iletsk not far from the Kazakh border, but this was a totally different level of Pachamama’s creation. 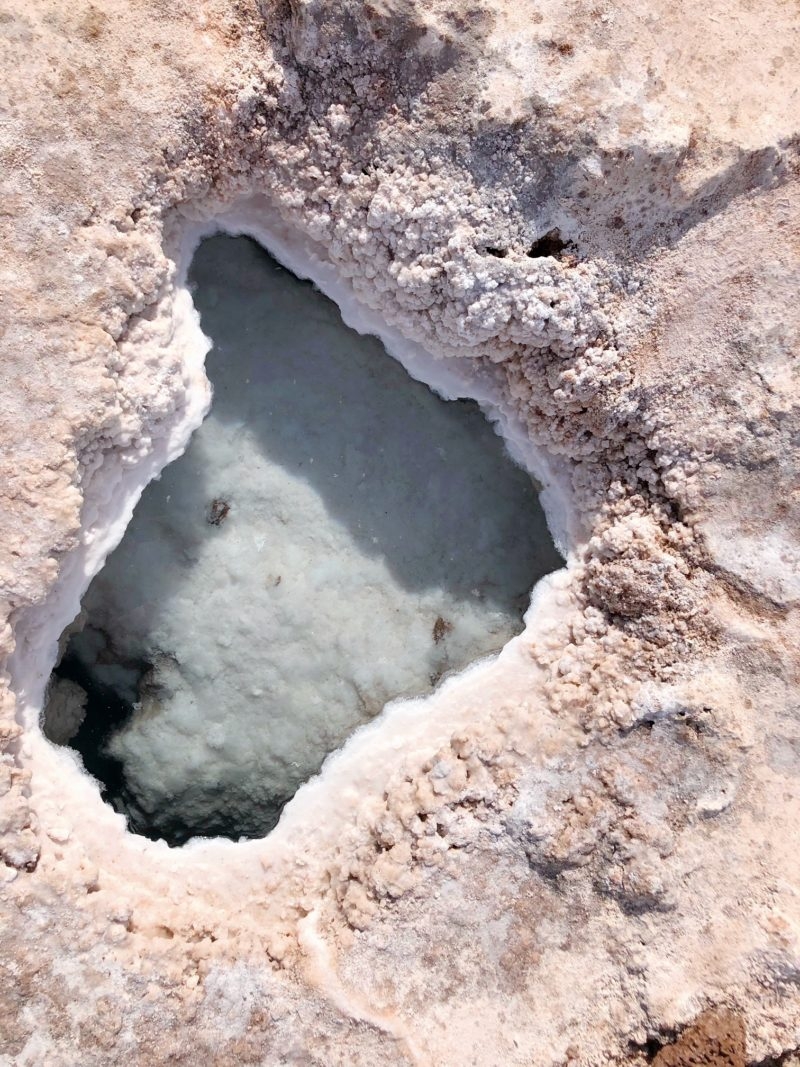 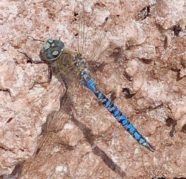 Swimming was allowed in first and last lagoons, leaving the other five in between just for observation. I think we took that beauty in as much as we could. We soaked our feet in the last lagoon, but decided not to swim, even though the place had bathrooms and showers with cool water. We were surprised to see dead, but well preserved butterflies covered in salt crystals along the shore. Then all of a sudden a dragonfly landed on Justin’s white shirt that later decided to immerse itself in the salt water of the lagoon. What were those creatures doing there? With no fresh water or any plant life in sight for about 40 to 60 km it was puzzling to us to see these insects.

It became clear that the dragonfly was drowning in the salt water and Justin pulled it out and rinsed it with our drinking water from the Nalgene. We took it to our van and decided that we would let it out back in Calama which has a river flowing through town. 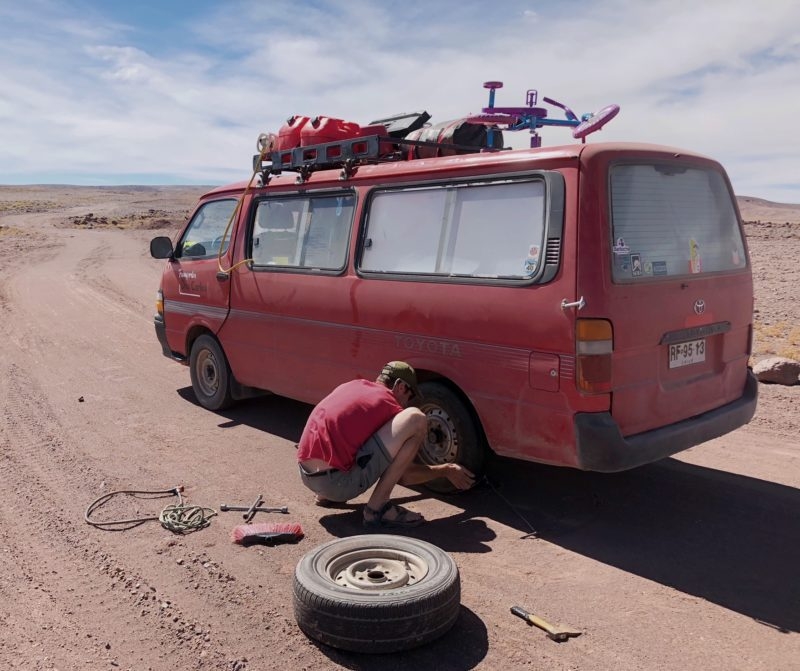 It was almost noon and the air got really hot again as we drove back on the washboard road going close to 90km/h and inhaling dust along the way. As we reached the main highway and traveled some miles away from San Pedro de Atacama we stopped for a pee break noticing that one of the tires was going flat. The stop took longer than originally planned; Justin changed the tire and I fixed a quick lunch. 80 or some km later we were back in Calama looking at the map and figuring out the future route. The blue dragonfly was released by the river.
To sum up, the places we visited in the Atacama desert in 3 days include:
🌵Pukara de Quitor in San Pedro
🌵Laguna Tebinquiche, 26 km S of San Pedro
🌵Termas de Puritama, 28 km N of San Pedro on road B- 245
🌵Valle de La Luna, just outside of San Pedro on the main highway from Calama
🌵Lagunas Escondidas de Baltimache 55 km SW of San Pedro
The places we decided not to visit:
🌋El Tatio geyser 90 km N of San Pedro
🌋Piedras Rojas
🌋 Lagunas Miscanti and Miniques
🌋Laguna Verde