June 19, 2018
Roadtripping in Chile: Osorno to Santiago
In Our New Home on Wheels
by khadizhat 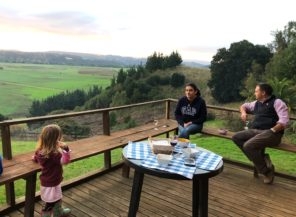 We took a bus in Bariloche and after crossing the border from Argentina into Chile arrived in Osorno, a Chilean town where we stayed for over a week with Justin’s friend German and his wonderful wife. There we dealt with all the paperwork that was required to have everything in order with our new South American home on wheels that we named Don Pedo, translated as Don Fart. This name fits it better than anything else considering its mileage, years of service and the noises it makes as a result of the two. The vehicle has apparently been owned by a long string of foreign travelers over the years, with the most recent of these having been Canadians, Belgians and a Czech family (with four children!) who all traveled in it in South America before we decided to purchase it. 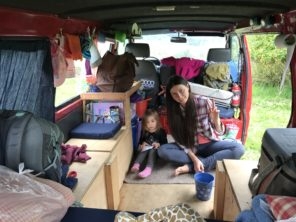 After our luxurious Leisure Travel Vans RV that we owned in North America Don Pedo was quiet an adjustment, especially for me, since Justin is quite used to minimalistic conditions while traveling and camping. The getting used to I had to deal with was the absence of toilet and shower and our extremely limited space inside the rig. Our toilet now was the forest and a shower head was replaced with bathing in waterfalls, streams, lakes and rivers. Never in this lifetime could I have possibly imagined that I would choose voluntarily this lifestyle... especially while catering to a toddler at the same time. But it did happen and more than anything it was my idea which Justin gladly supported.
At the beginning of our journey when leaving Osorno we didnt have a set plan or a route. As we often do, we just decided to go with the flow. And the flow took us through some of the most amazing hot springs in Chile which we visited while driving north, sometimes also zigzagging east and west. 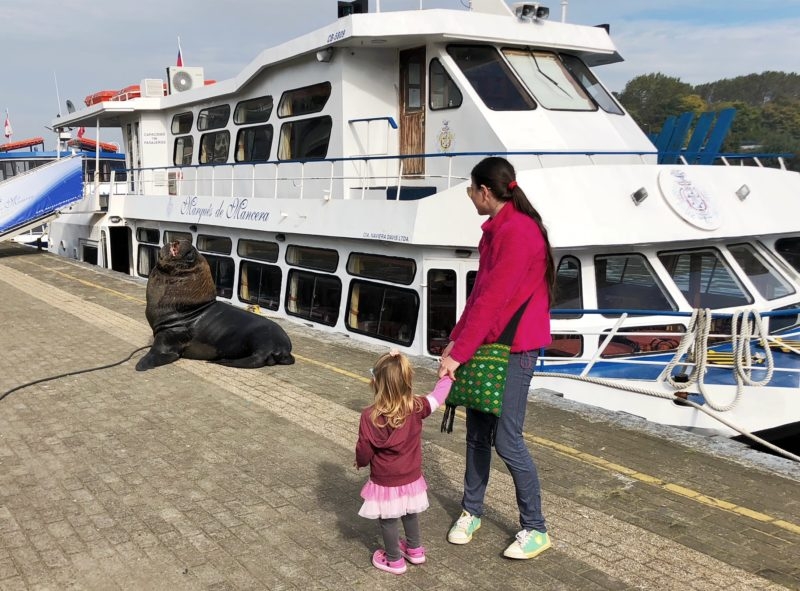 The first stop after leaving Osorno was the coastal town of Valdivia, founded in 1552. While driving through town we kept talking how this settlement existed before the Mayflower even landed in the USA.  In Valdivia we walked along the river, visited a local market and observed a giant sea lion lounging on the pier. From there we drove to the land of hot springs, Termas de Coñarife. The dirt road filled with potholes curving along the river was taking us high in the mountains, where we found ourselves the next day splashing in some hot springs (termas) called El Rincon. We went there early in the morning and had entire place to ourselves soaking in the healing waters of mother nature and looking at the waterfall. 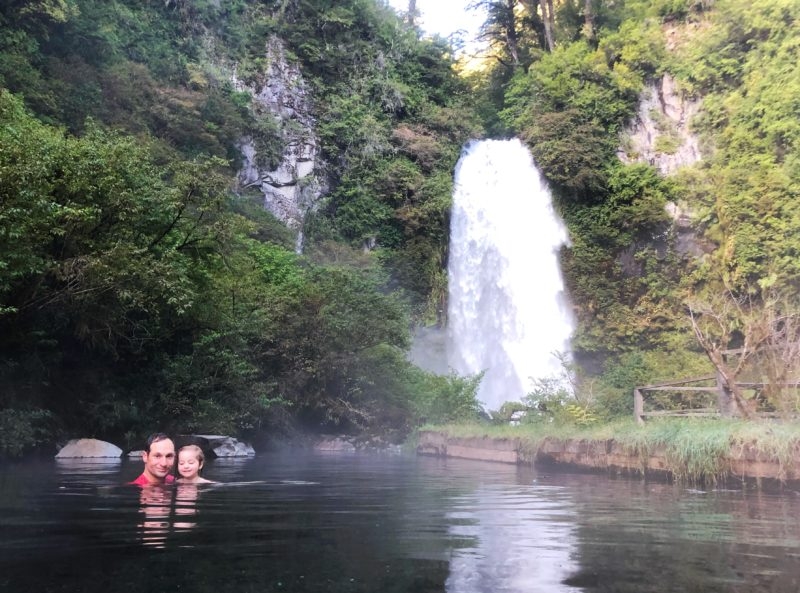 Our next stop was a town called Villarica on the shore of a big lake facing a volcano. Aya had a lot of fun with local kids as they were getting miniature freshwater lobsters (pancoras) from the floor of the lake. Prior to arriving to the next hot springs Termas de Chillan we drove through the Chilean town of Los Angeles and visited a local waterfall called Salta de Laja. 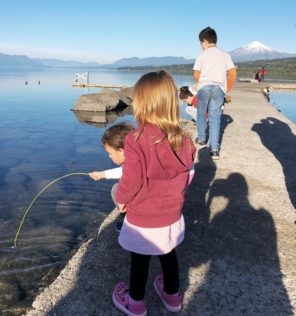 Around that area we also started noticing amazing amounts of trash laying on the ground everywhere we went.  This was not expected in a country that was as economically developed as Chile is. We saw people that had their trailers filled with trash just drive in the countryside and dump all that nastiness
on a side of the road. We thought that maybe it was specific to a certain area and the municipal garbage service was on strike or not functioning properly, but no! This became the most typical and repetitive sight during our road trip throughout the country. We were surprised, shocked, and disgusted. In most places where we parked for a lunch break or stopped for the night we collected piles of trash, but it was not possible to get even the tiniest percentage of it because the trash bags would simply not fit in our van. One day Justin was talking to our Chilean friend on the phone and mentioned this most typical sight, trash, and asked how it could be possible. The friend responded, “por que la verdad, es que somos un pais de chanchos.” (We are a country of pigs!”) and that expression stuck with us and has become an ongoing joke. 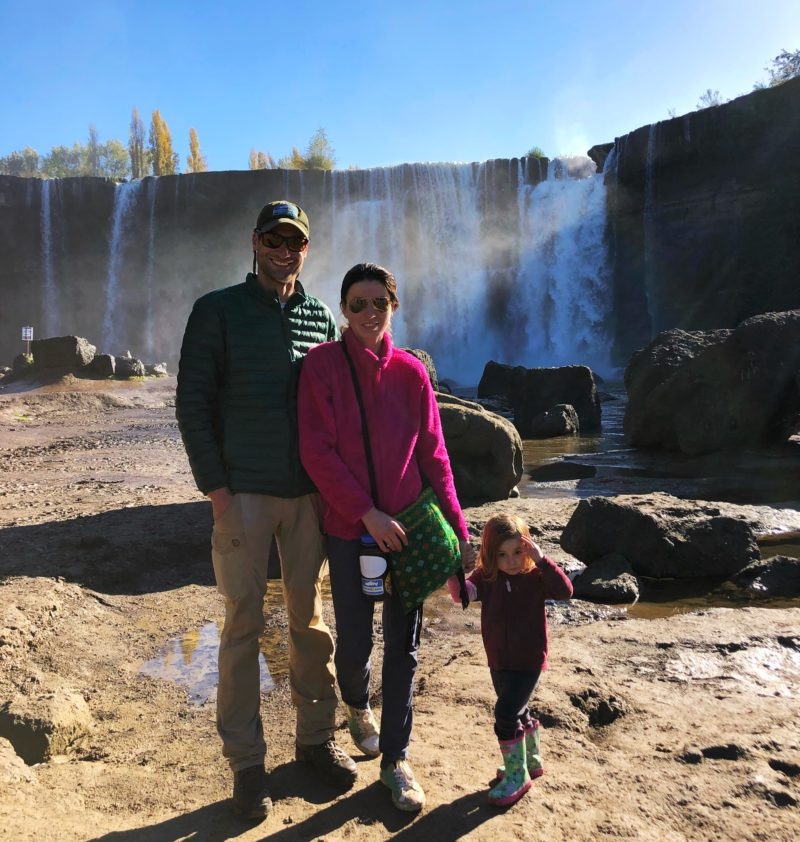 Certain areas, however were free of trash, and usually those places were mountains. After spending some time in towns were we purchased some necessary tools and equipment for our rig we drove to another hot springs area called Termas de Chillan which sits high in the Andes and rather close to the border with Argentina. The hot springs were close to an active volcano that was spitting gases as we were soaking in muddy pools together with other, mostly elderly, visitors of the resort. We were so high in the mountains that there was snow on the ground that simply didn’t melt despite the bright sun and warm temperatures. That provided plenty of entertainment for Aya who first spent some time in the hot pool and then shoveled snow for no particular purpose but to amuse herself! 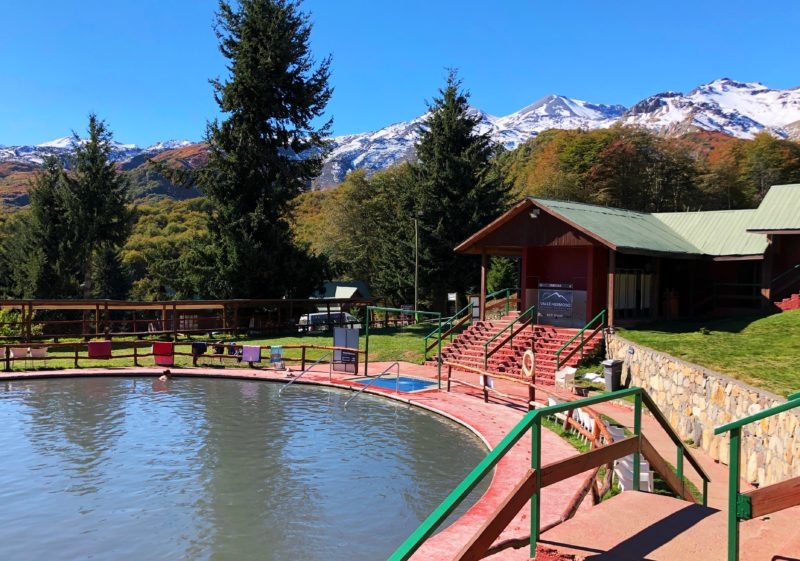 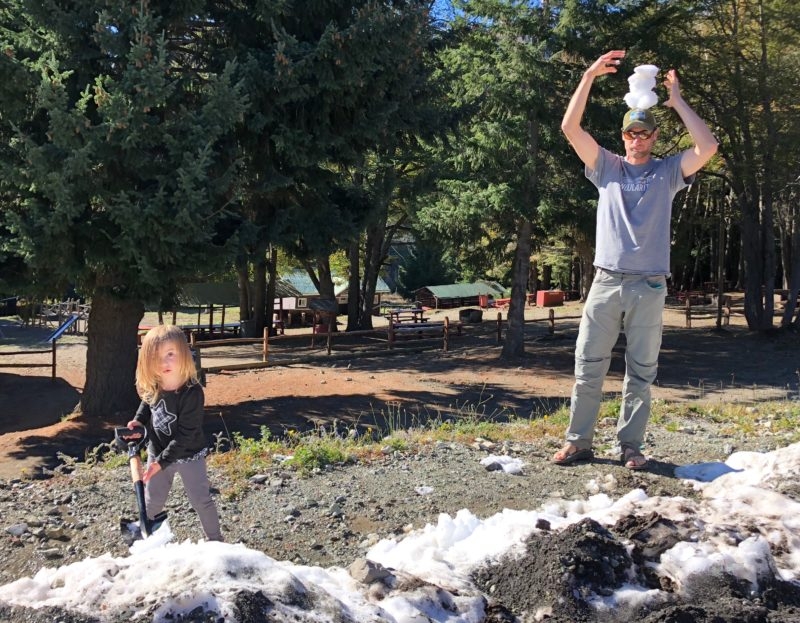 Traveling long term in Chile is somewhat convenient in a sense that there are very well equipped gas stations that I have not seen in other countries. For example, Punto Copec is a gas station that also has a restaurant, a laundry room, a playground, bathrooms, showers, ATMs, an automated machine to pay for toll roads in Santiago and probably some other conveniences that we haven’t even noticed or used. Not all the gas stations are as well equipped as Punto Copec, even regular Copecs that are located in cities don’t provide similar services. 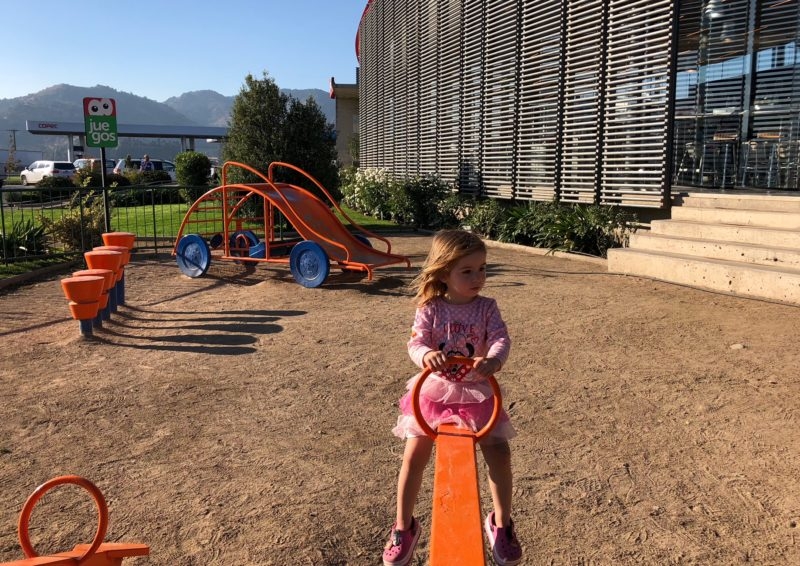 We were 8 days and about 1500km into our trip when we arrived in Santiago. We decided to stay in a hotel in downtown as trying to find a tranquil spot in the capital is nearly impossible. Parking our rig in the hotel’s garage with the clearance that was close to the height of the vehicle also proved to be nearly a nightmare (my own fault for not having checked this out when I booked it), but Justin managed. 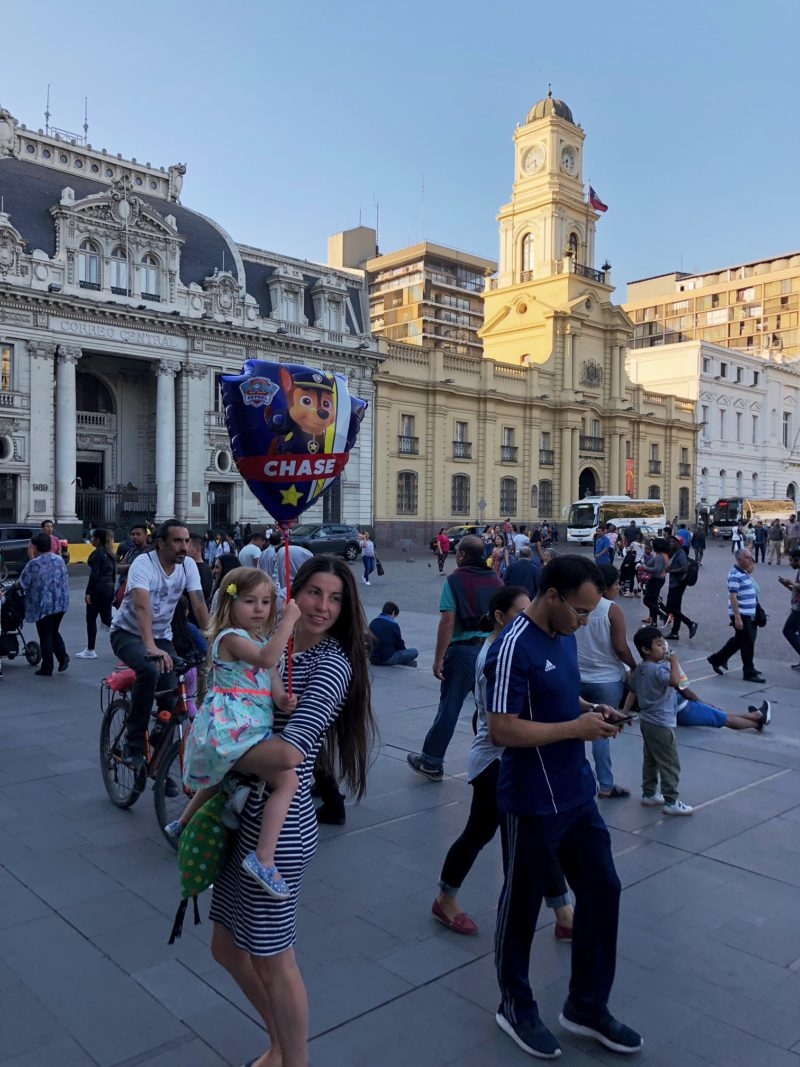 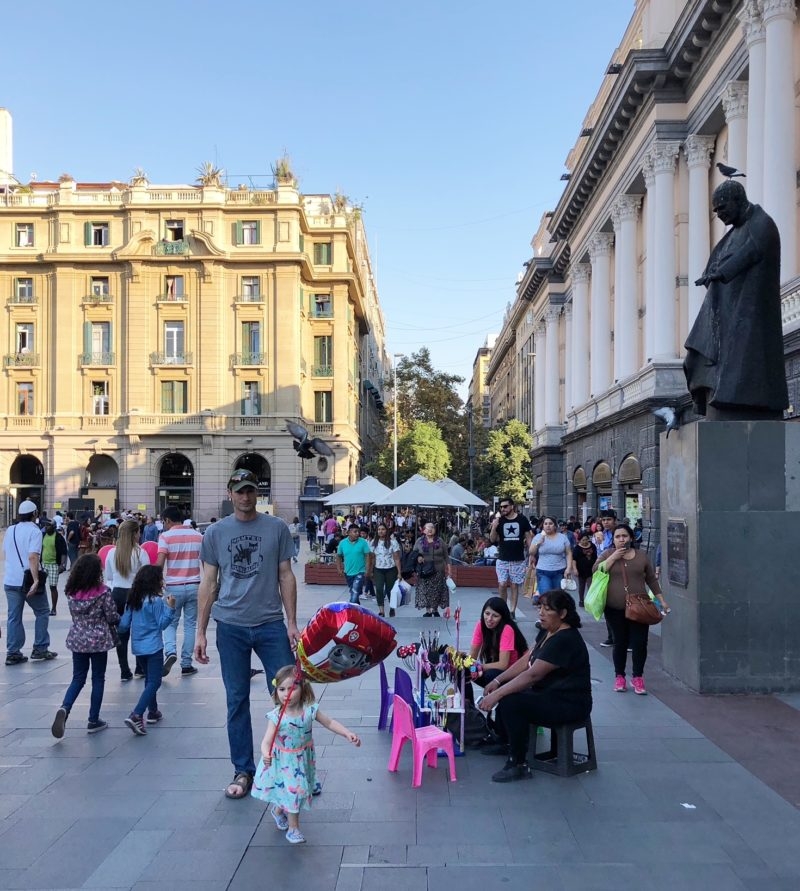 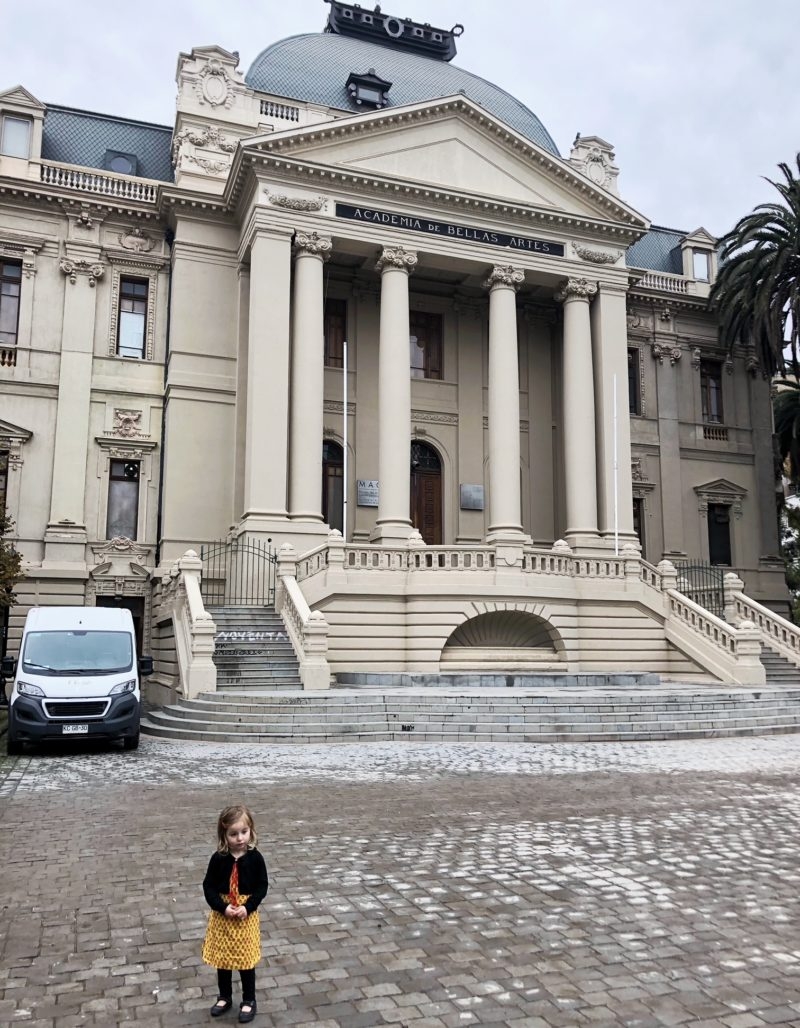 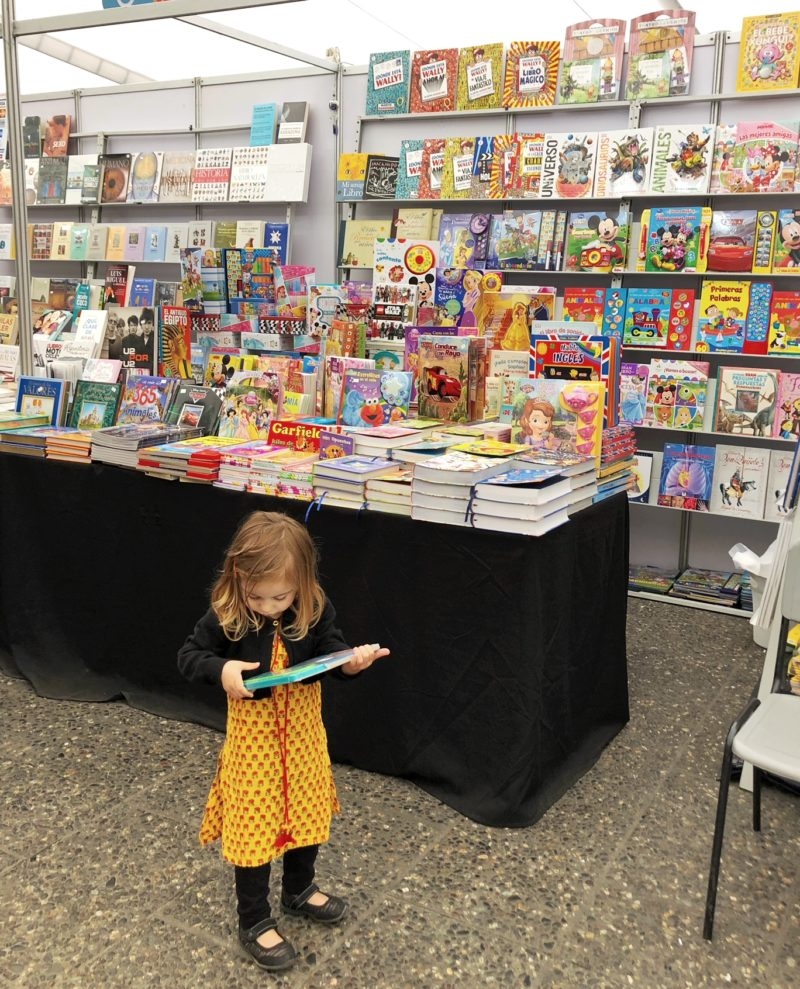 In the next days we were exploring Santiago at a very leisurely pace because visiting multiple sights as I was used to prior to having a baby is very difficult with a toddler. Nonetheless, Aya did a great job walking from our hotel to Plaza de Armas, the Cathedral, a few museums, Palacio de Monedas, visiting a book fair where she selected one for herself, and even climbing Santa Lucia Hill from which she got to see a skyline of Santiago. 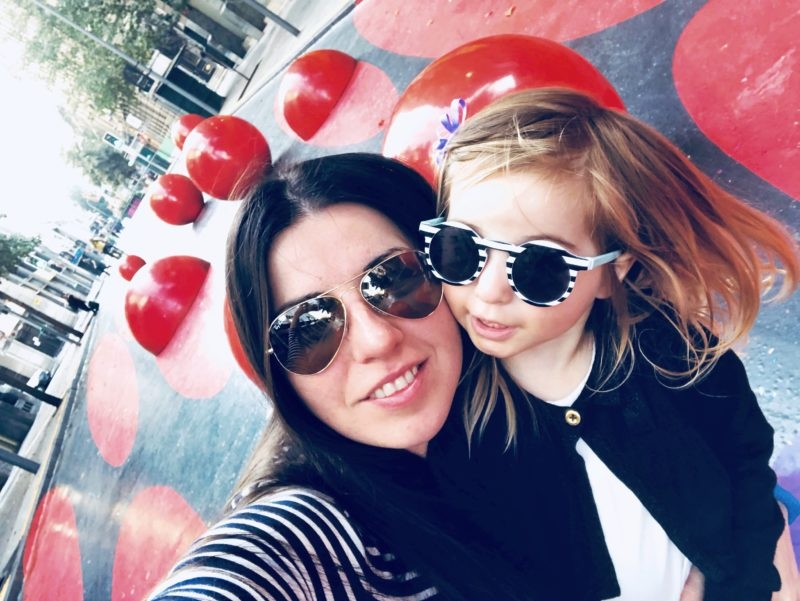 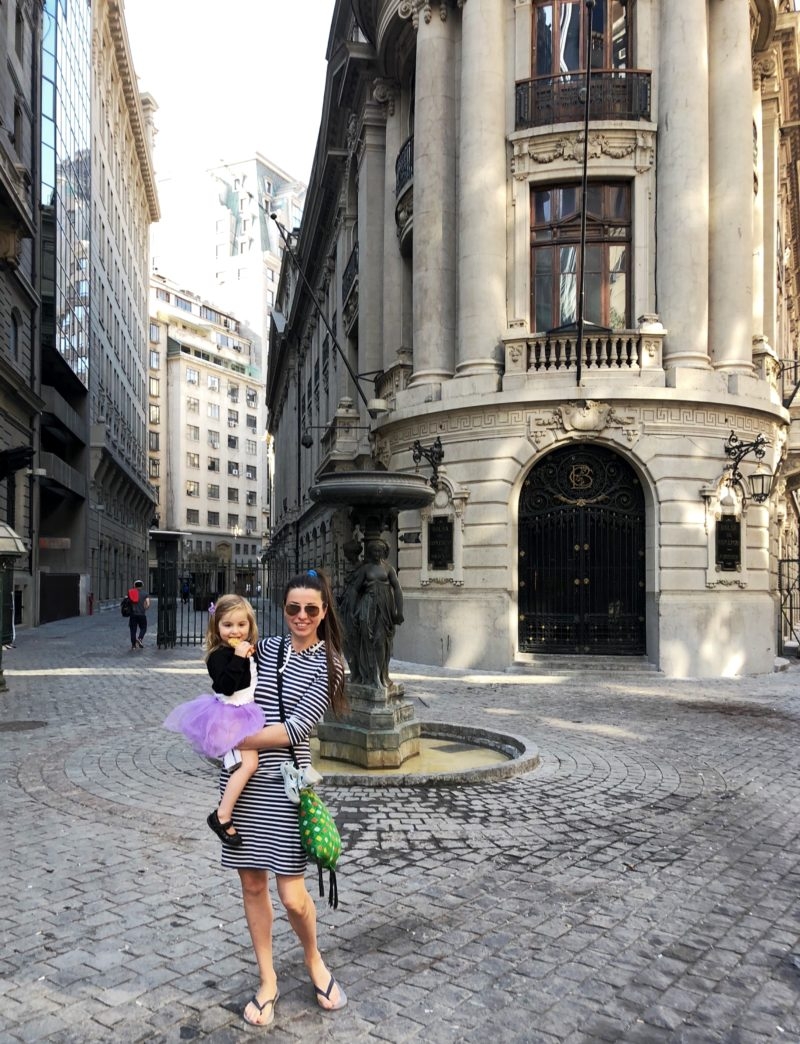 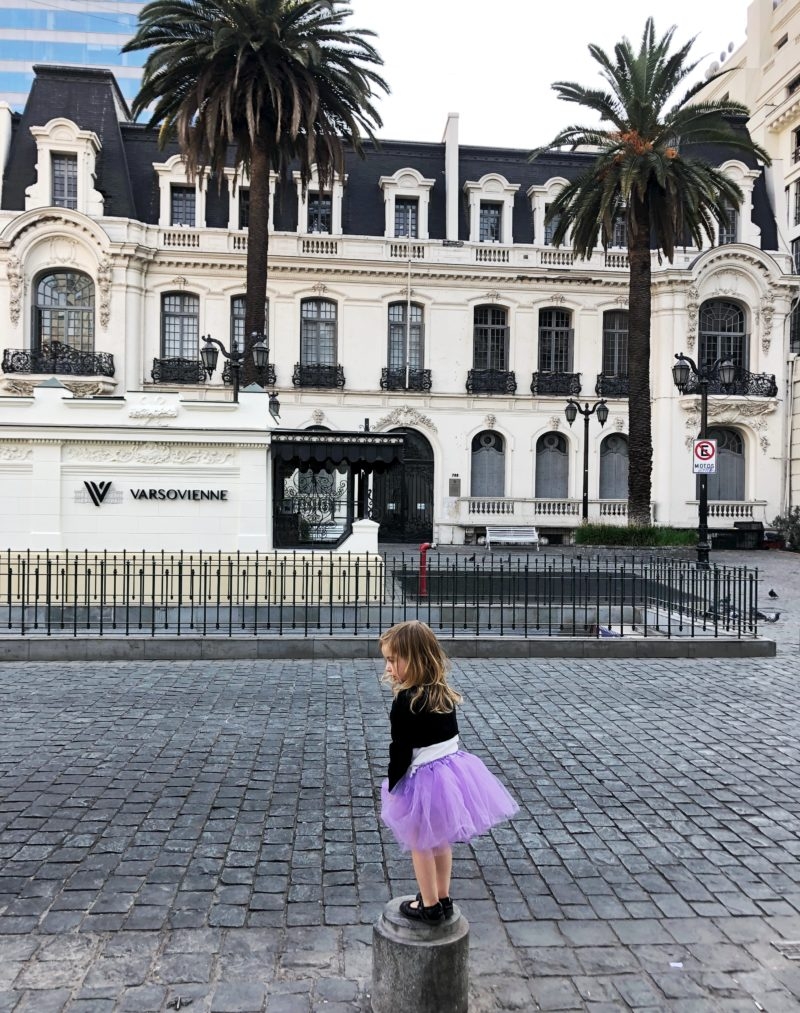 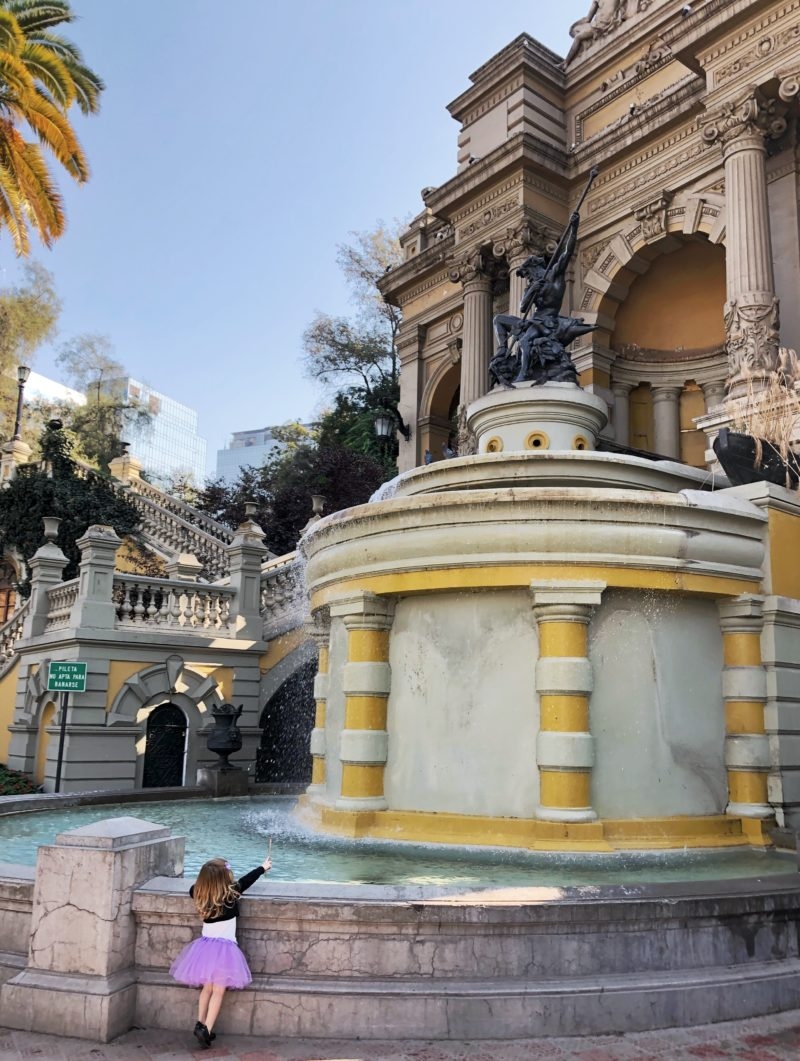 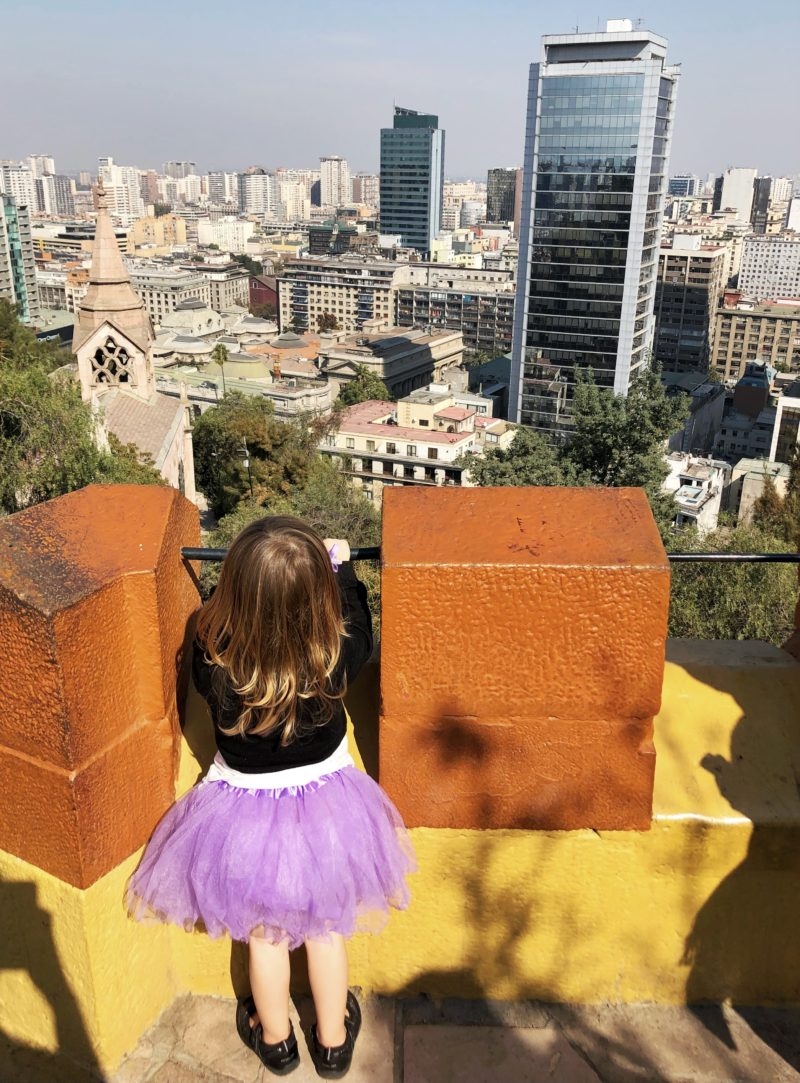 Before leaving the capital we spent a few days with Justin’s friend Marcela and her family in one of the non- touristy neighborhoods of the city. Then after 5 days of being stationary we were ready to get back on the road and head towards the famous city of Valparaiso and its touristy suburb Viña Del Mar. 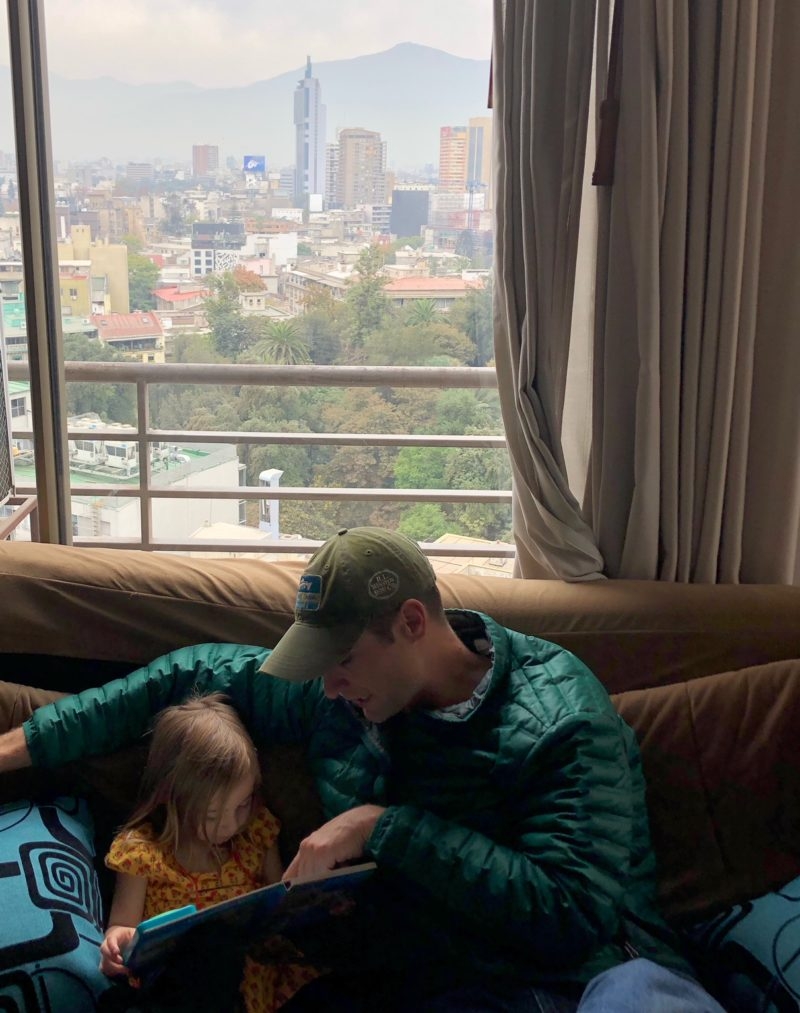 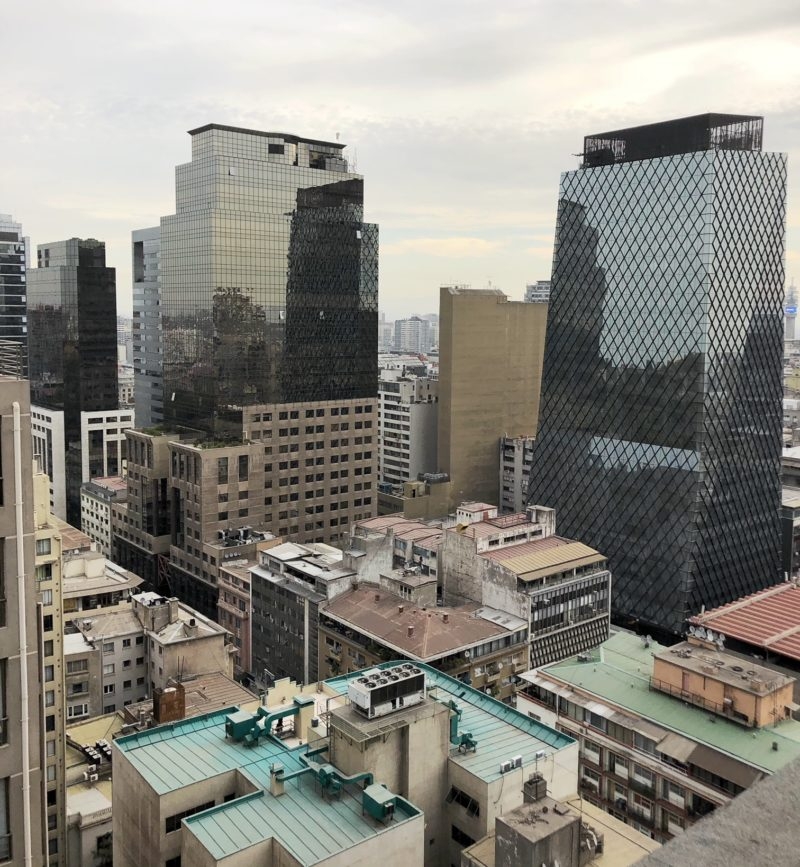 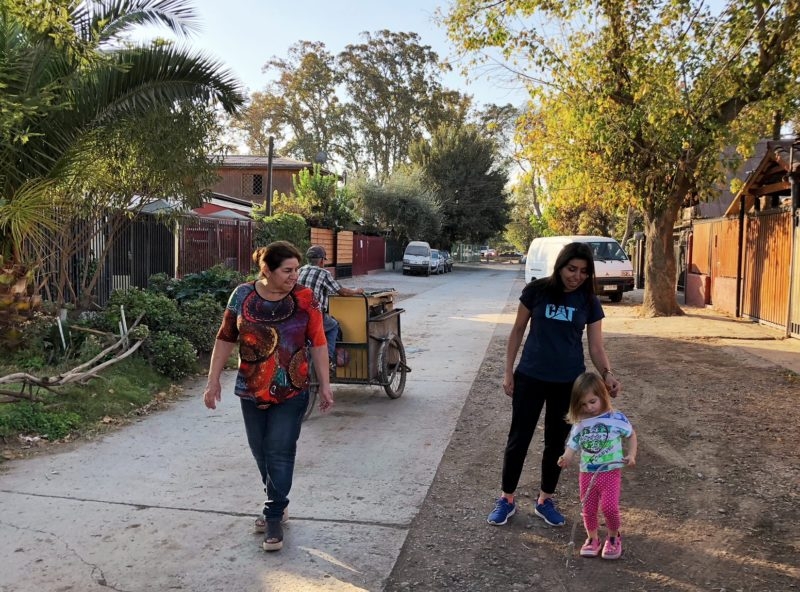