July 8, 2018
Roadtripping in Chile: Valparaiso to Arica and Other Coastal Towns
by khadizhat 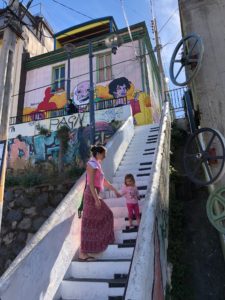 From Santiago we drove to Valparaiso, a colorful city on Chilean Pacific Coast. At that point we hadn't seen Pacific Ocean since we left California just over half a year ago during our 8+ months long road trip throughout North America.

Valparaiso for us was the first coastal city north of Santiago, but certainly not the last. Valpo, as locals call it, is only an hour drive away from the Chilean capital and it certainly has a different feel. The city is known for its artsy influence, colorful murals and buildings and the hills similar to those in Californian San Francisco. It was not so easy to find a parking spot for our rig right in downtown, but eventually we succeeded. Originally I had high hopes for exploring the hills and learning more about the city’s culture, but Aya lasted for only two hours or so before a meltdown due to so much going on around. So I had to come to terms once again with the fact that my travel rythm will probably never be the same as it was, at least not until she grows up and has interest in exploring similar things. Until then I just accept that my needs and wants are not the priority. 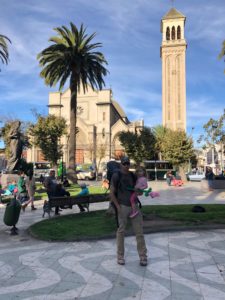 Aya started out with sitting in her Deuter carrypack on Justin’s back, but very often wanted to continue running on a road on her own. It sure wasn’t easy to enjoy the surroundings and keep her on the sidewalk. Justin and I had to take turns. One of my favorite works of art was the so called Beethoven staircase colored as a piano. And clearly one of Aya’s favorite places in town became Plaza Simon Bolivar next to Plaza de la Victoria filled with children’s entertainment such as a playground and a miniature amusement park with all kinds of games.

We spent the night right by the Pacific enjoying the sound of the waves, and after breakfast went to Viña Del Mar, an affluent touristy suburb of Valparaiso where Aya played at a nice big playground just across the street from the ocean. Justin, meanwhile, was catching up with his work. 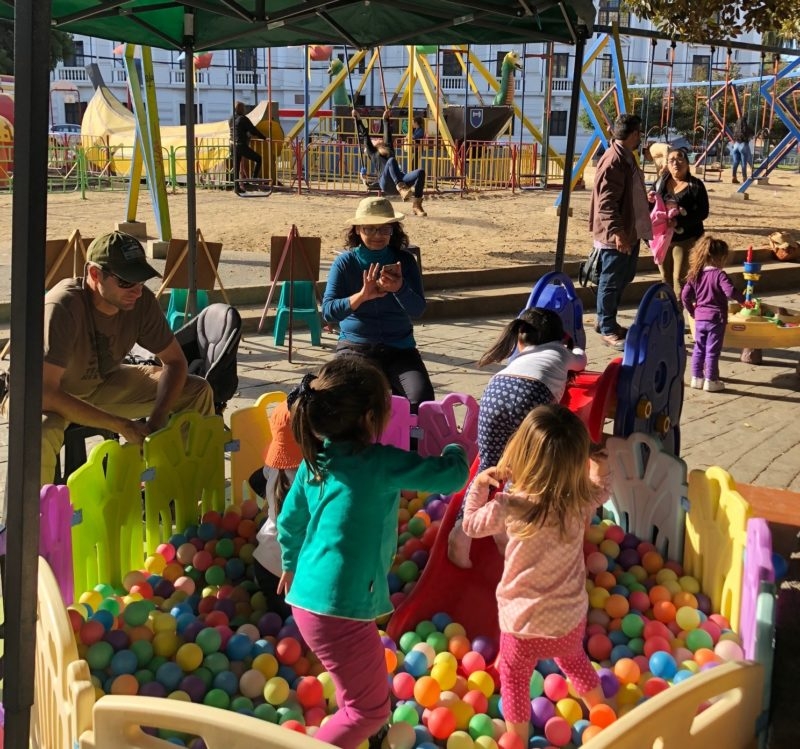 In the afternoon we drove to Zapallar, a beautiful area with SoCal type real estate on the coast that boasts a few beaches with turquoise water. We visited one of those beaches, Playa Las Cujas that was hidden at a small bay. Besides just enjoying the beauty of the place we also walked on a well maintained road that goes in a southward direction from the bay through a rocky beach on one side and houses built on the mountain overlooking the ocean on the other. We climbed some big rocks, explored various plant and fish life, and saw a rocky island maybe 500 meters away from the shore. To our huge surprise that island was filled with penguins. That sight made us wonder what these creatures were doing there because we were in a rather warm climate. 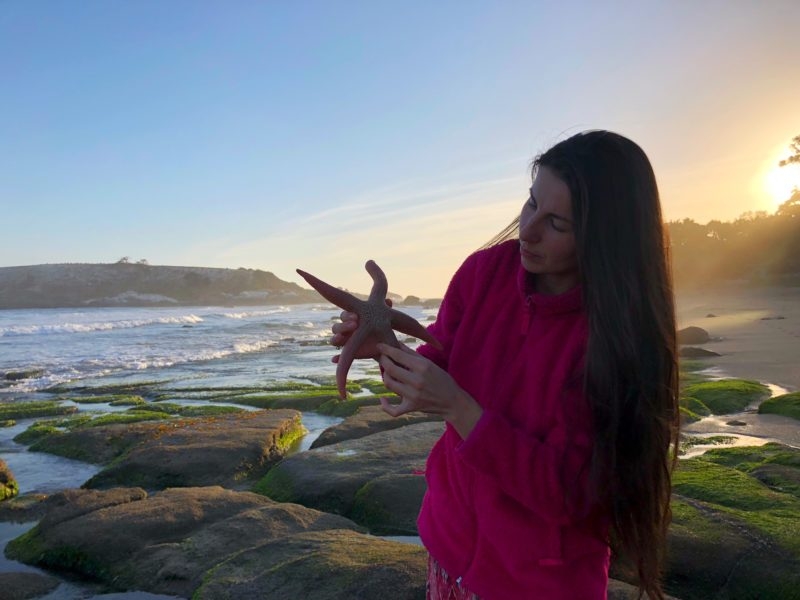 Our next planned beach stop was a nice area of Bahia Inglesa, but prior to getting there we had a couple of adventures along the way. At the end of one of the days in route to the above mentioned destination we drove into a little settlement by the water. It didnt have electricity or water infrastructure , but it did have solar panels installed just outside of it which seemed to provide enough power to the village. We parked for the night on the rocky beach and while I was cooking dinner Justin and Aya managed to explore the shore and bring back some interesting water creatures which they later released.

Next morning we spoke to the locals who were collecting thick seaweed and building multiple piles out of it. We learned that the economy of this village and some other coastal communities of similar sort is based on the sourcing this plant called Cochayuyo (which is great for vegan Chilean style ceviche, by the way) that is being collected, dried, compiled and then sold to bigger companies. These types of villages are not working throughout all of the year, but instead only a few months during the harvesting season. 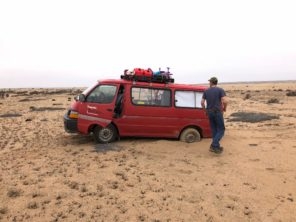 The following day we had some mileage to cover before finally arriving at Bahia Inglesa, but Justin got really bored after driving on dull, deserty roads with very little vegetation and no sunlight. He decided to get off the asphalt road and drive through what looked like hard sand to get to the rocks. My gut said it was a bad idea, but looking at the tracks in the sand I agreed. We got to an area where we played with some rocks and looked at the desert topography in detail, but as we started driving back to the road the tires sank to the axels and we got stuck. I ll spare you the details of my fury and Justin’s excitement about the situation (he said that so far it was the highlight of his trip). It took us more than 6 hours to get out of the loose sand and be back on the road, but we did it. All three of us were covered in sand and dust head to toes. Luckily we were able to take a hot long shower at Punto Copec gas station right before reaching Bahia Inglesa in the dark. 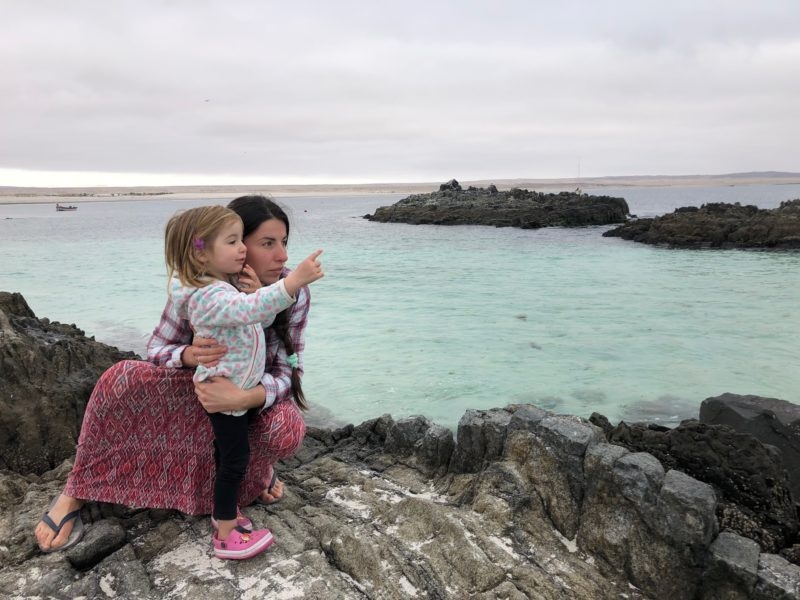 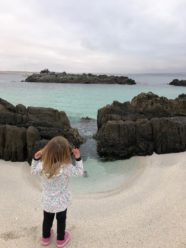 Bahia Inglesa is probably one of the best Chilean beach towns to visit in the summer. It has a very good infrastructure for vacationing with kids. Unfortunately we did not get any sun the three days that we were there. In late fall and winter beach areas are usually covered with clouds, fog and gloom. Nonetheless, we enjoyed the turquoise waters of the bay together with its unique rock formations and marine vegetation. After Bahia Inglesa we were driving on the coastal road for probably over 200 kms. That was again the time when we started noticing outrageous quantities of trash right by the water. Many of those sites looked like “official” municipal dumps, but they were no more than trash areas of the locals who for some reason chose to dump their garbage right on the coast. It was hard for us not to pay attention to this occurrence because very often we pulled over and Aya wanted to climb the rocks, touch the sand and shells. We had to follow her every step making sure she doesn’t step on a glass from a broken bottle, used diapers or someones old underwear. No idea why, but underwear seem to be the most often discarded items of clothing on Pacific coast beaches in South America.  There are literal tons of examples to be seen.  The trash varied from typical plastic bottle and beer cans to toilets, sinks and electrical appliances. The situation with trash didn't much change with miles or the direction we traveled, but luckily some areas on the coast still had access to nature’s beauty which we observed and engaged.

We visited Chañaral, Taltal and Tocopilla, small towns on the coast that did not have much to see of our liking, but they offered plenty of opportunities to explore the coastal wildlife. In the mornings after breakfast and in the evenings before dinner and sunset we went to collect shells and observed numerous water creatures. Some of them we had never seen before, but the ones we knew, such as crabs, snails and starfish we caught and later released. Aya of course loved this but it was hard to say who was excited the most. We all really enjoyed this activity. 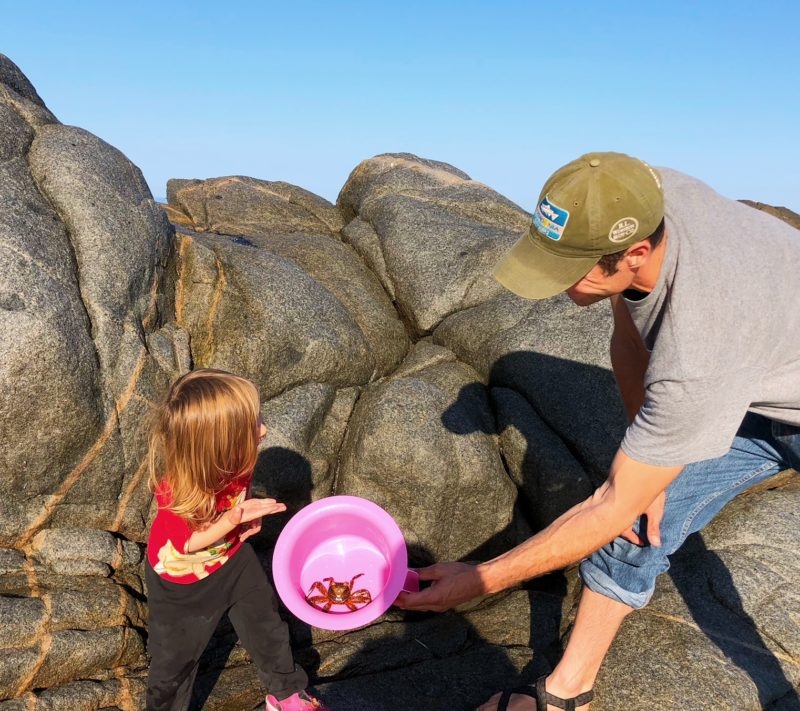 Towards the end of our travel throughout coastal part of Chile we arrived in Iquique, a clean city with good infrastructure for tourism. Despite the winter season the temperatures were warm and we spent some time on a very well-maintained beach that even had public showers. In Iquique we also ran into two other rigs with foreigners, Germans in a full sized RV and a Brazilian family with 2 kids in their minivan same size as ours.

Arica was the last big city in Chile that we visited. We stayed there for a while handling all the paperwork (literally several days of bureaucratic bs) to get the rig out of the country. We camped at the beach every night and almost every morning religiously went to a big playground where Aya could expend her energy and play in the sand. Once all the permits were obtained we changed the course of our direction. Leaving Arica, at one of the intersections there was a sign for Peru- straight and Bolivia- right. We turned right. And that is a different story. 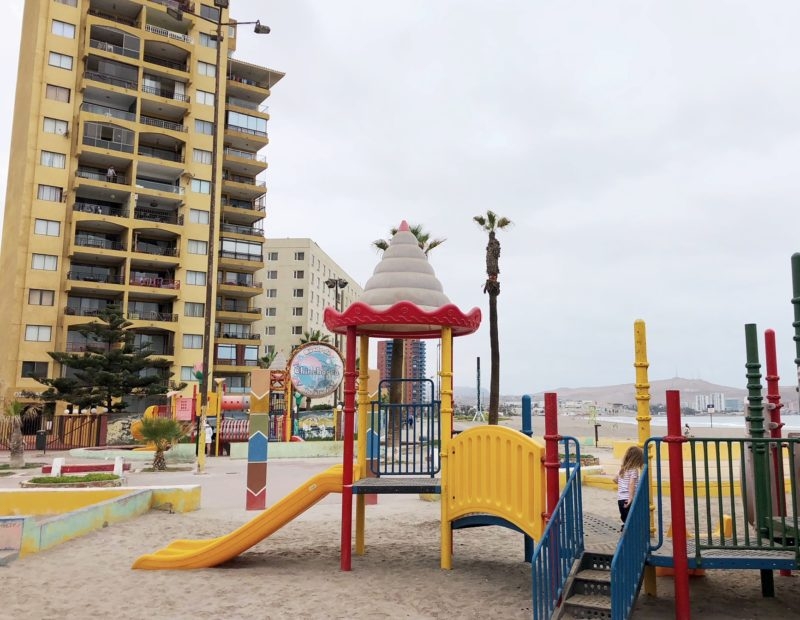 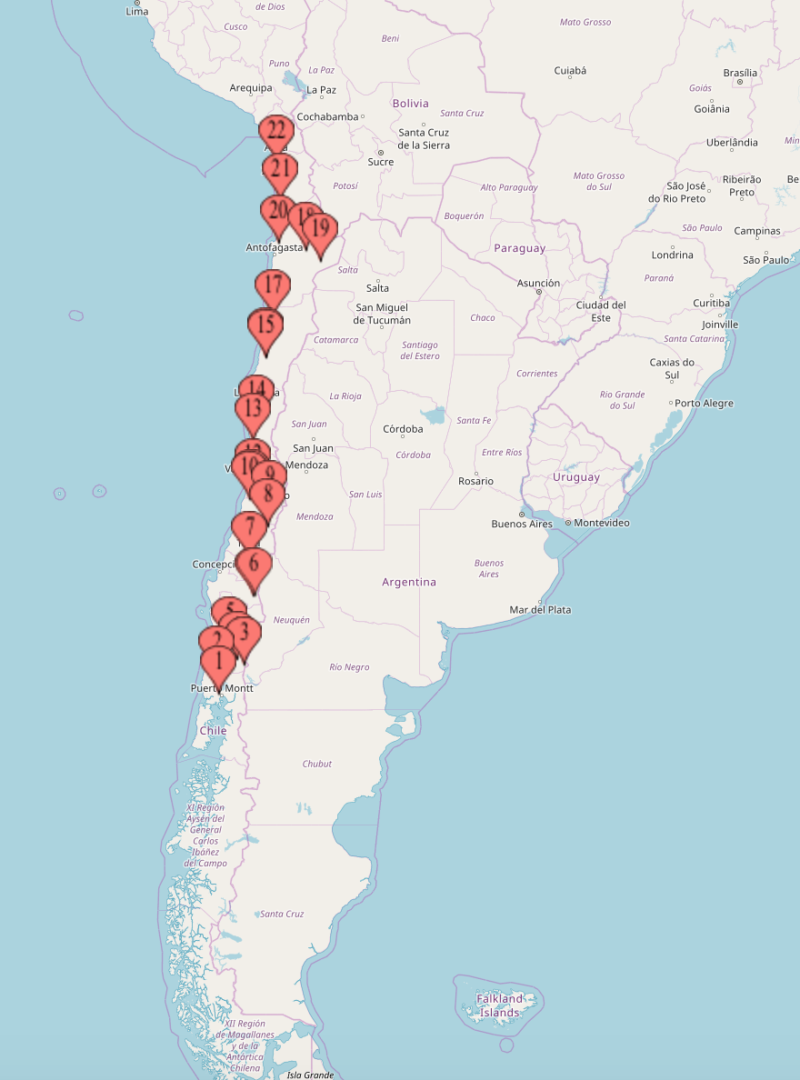 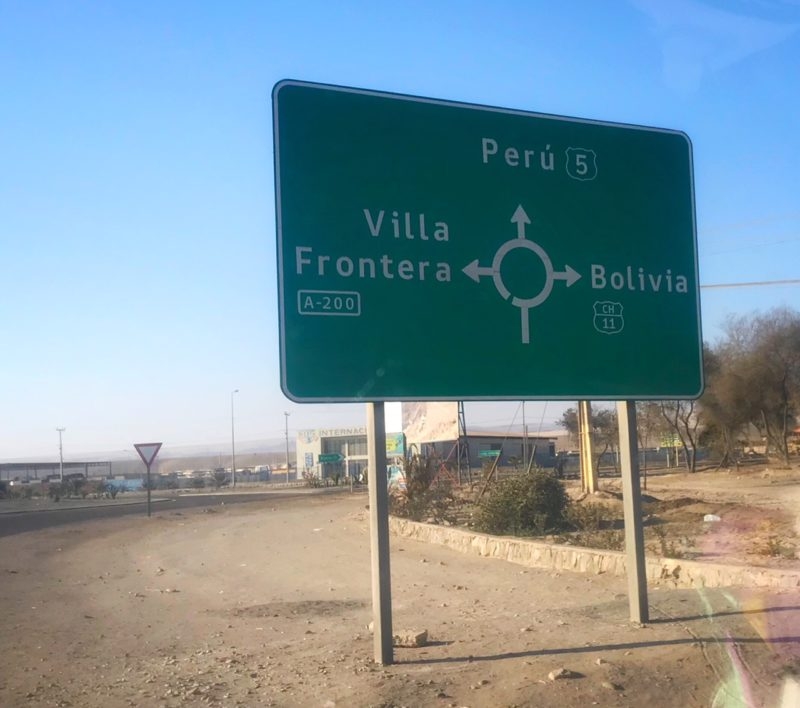