July 9, 2017
Ravens in Winter, by Bernd Heinrich
by justin

Ravens in Winter, by Bernd Heinrich 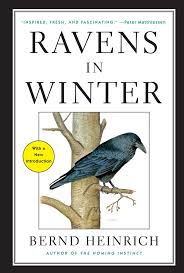 I got on a bit of a Raven kick once we reached Canada on this road trip, and before long I was looking for something to read.  I had probably seen Ravens as a kid before my interest in birds developed to the point that I started learning Latin names and trying to understand taxonomy, but after this many years away from them they were like a new species to me altogether. And clearly, they were different.  So I found a book at a shop in the town of Tobermory in the Great Lakes region, and bought it.  Oddly enough (or perhaps not) I had emailed a client of mine, David Capen, who is an ornithologist and asked him for a referral and three days after I bought the book he emailed back recommending it.  What luck!  Capen said in his email “Heinrich is a beast. He was a young child when his family fled from the Nazis.  He lived in the woods for years and never really grew out of it.  He was also a fellow faculty member at UVM, but his real love was observing wildlife, doing simple experiments in the wild, and writing books that lay people would read.”

And I will thank him for doing exactly that!  One of the things that has always been frustrating in my studies since leaving college is that there is a difference in how things must be written for folks who aren’t actively engaged in doing research, but this can be hard to find when searching for writing on obscure subjects.  To reach this public, which is always far larger than the one made up of the writer’s scientific community anyway, authors have to adopt a slightly different style.  So kudos to guys like Richard Feynman (physics), Wade Davis (anthropology), and Bernd Heinrich (biology) for making the effort and succeeding at bridging the gap between the market of their specialty and the public at large.

In Ravens in Winter Heinrich does this in two ways: first through weaving a strong narrative thread into the fabric of his research, telling the story of how the question being investigated was first posed, then what the experience of gathering data and observations over the following years was like from a first person perspective and in very engaging language; then second, he clearly summarizes his conclusions in a simple numbered list, and then provides an appendix with all of the charts and tables and graphs that support his conclusions.

The book is an investigation into the question of why Ravens “share” food throughout their northern range in winter, often actively “recruiting” other birds from great distances to show them where a resource such as a dead deer or other animal is lying.  It is a behavior that currently has been observed in no other species on Earth, and before the book’s completion Heinrich studied it through direct observation and physically demanding means that made it very clear to me why Capen had chosen the word “beast” to describe him.  And it was a compliment.  From constantly hauling hundred+ pound loads of bait meat up into the Maine mountains on his back, to climbing into the tops of spindly wind-swayed trees with binoculars and cameras, to sleeping in sub-zero temperatures for nights on end so as to make full day observations while lying on his belly in a snow covered blind, Heinrich seems more like a special forces operative than a biologist.

Readers are carried through the entirety of the study’s progress though, from its beginning with a single question to its branching out into a labyrinth of dozens of possibly related or possibly unrelated questions, and then back through the bottleneck of observation analysis that allows for the eventual few conclusions which tie the whole mess together.

Brilliant work, I think, and an excellent read for anyone even vaguely interested in these fascinating birds.  I highly recommend it.