I did some traveling over the last week or so, ostensibly looking at Dorado water between 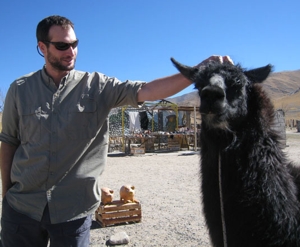 Santiago del Estero and Salta, but mostly accomplishing what would be called "touring", of some pretty cool country. Heading north out of the city the land becomes agricultural again at first, then quite arid, then mountainous and even more dry, and then suddenly there are grape vines and wineries and giant barrels everywhere and one is of course obliged to stop and taste. But I'm getting ahead of myself. Driving north along route 307 we passed through several small towns that seemed to get friendlier and more approachable one after another. Starting with El Mollar, then on to Tafi 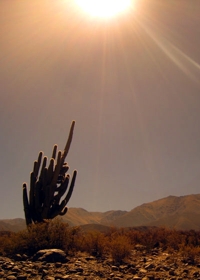 del Valle where we spent one night at a nice little hospedaje run by one of the unintentionally funniest women I have ever opened my ears to (and believe me, these ears have been through it) we proceeded north all the way to the Ruins of Quilmes. The Quilmes tribe was one of the many original Calchaquies civilizations, and they built large stone cities all along the Aconquija mountain range, which actually reaches heights of over eighteen thousand feet. This surprised me quite a bit at first, being as far as I was from the Andes, but after a couple of museum visits that showed the geology and plate tectonics of the area it all made perfect sense. The Quilmes had a mixture of agricultural and hunter/gatherer practices, and were in fact the very last of the northern civilizations to submit to Spanish rule, largely due to the leadership of a fellow named Juan Calchaqui. Juan was captured as a young child by Spanish soldiers, then educated to some degree

before his escape and return to his people. I can only imagine that his familiarity with Spanish customs and military practices helped his strategic planning process during the decades of armed resistance to colonial domination that followed. The cities of the Quilmes tribe, like the one pictured here, were built almost entirely of stone in strategically defensive positions amongst the mountain range, with the actual dwelling floors being several feet below ground, surrounded by what looks from the outside like a short stone wall which is in fact head high from the inside(if you are of 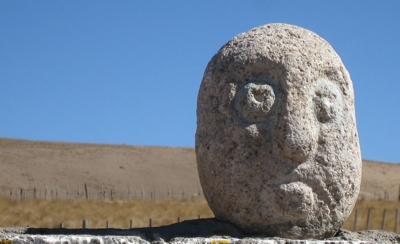 Quilmes blood I guess),and were covered with a thatched sort of roofing material except at the center, which was left open for smoke to pass through. The ruins pictured here are situated at an elevation of over six thousand feet, and a heck of a long walk from the river flowing (sometimes) through the valley below. Apparently at the time the Quilmes lived here though there was a spring which supplied water to the whole village. 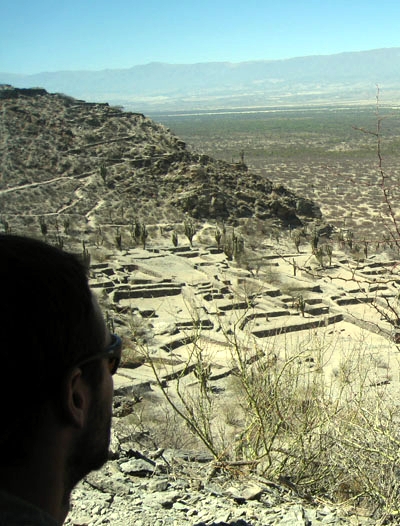 Even before the Spanish the Quilmes had been having a tough time for a long while, almost constantly at war with the Incas, who, much like the Europeans, had come from the North seeking to dominate what they saw as inferior cultures. Interaction with the Incas left its mark though, and many Quilmes produced but Inca style statues can be seen in the area as well, including giant heads and Stonehenge like pillars, which are pretty darn cool. Continuing north from the ruins into the wine country of Colalao Del Valle, Tolombon, and Cafayate in Salta province we visited several bodegas (vineyards) and drove through a lot of parkland that would remind any Yankee of Arizona or New Mexico, other than for the abundance of llamas, pigs, and goats running around and the poor condition of the road. I must say though, the people in these towns could not have been nicer. This was

especially refreshing after spending the previous week in a large city that sees almost zero tourism, constantly being stared at with mistrustful and challenging facial expressions due to my generally sticking out like a sore thumb (or, like a six foot-four Germanic looking type as the case may be). But these folks up in the North were as open and inviting as a tourist 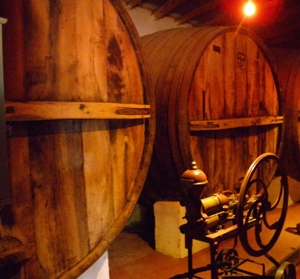 could ask for anywhere in the world, and almost every single one of them seemed to have a smile that was as authentic as it was welcoming. Our last night of the trip I had a big goat asado and sampled a beer called Norte, which suffice to say, we do not have in el Sur. The goat was alright, but in the future I think I'll stick with our southern lambs (and our southern beer). The wine we sampled from the area though was in fact good, exceptionally good, and I'll be looking for some more of it in the near future. More fruit stands were raided on the way back down the highway in the morning too; the prices, variety, and quality of the fruit being near 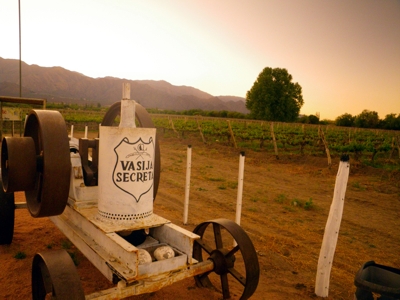 unbelievable to a guy used to spending what it takes to get the same stuff out of the produce section at Kroger's back home. It's down again to Santiago now and then shortly headed south and west towards Mendoza.  I hope you're all doing well; look for me to write again sometime soon.