Machu Picchu is actually one of the most visited tourist sites in the world, with up to two thousand people per day walking its paths and photographing its grounds year round.  This may sound like a turn off, especially if you are anything like me in the sense that you generally look for the path less traveled (or for places without paths at all), but let me tell you here and now folks – this one is worth it.  The site is amazing, in practically every sense.  From its location and scenery to its history and general energy, I could hardly recommend it highly enough. 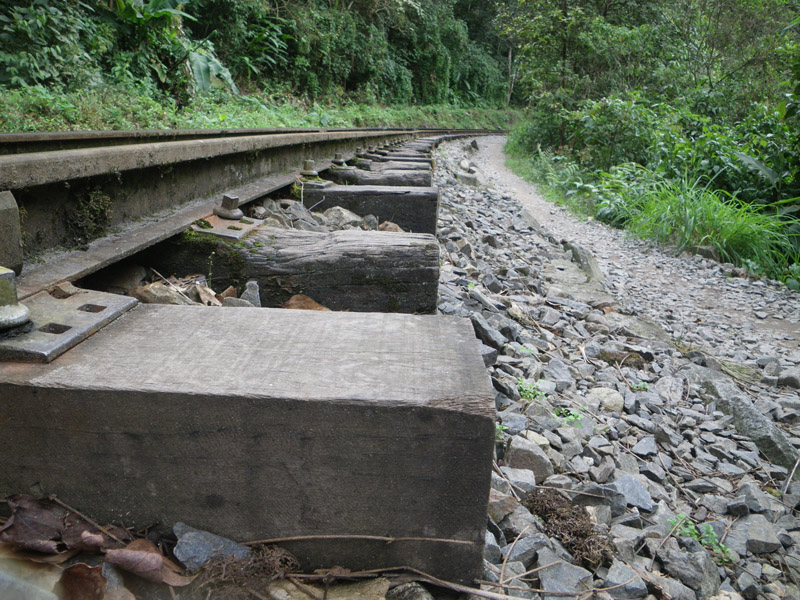 There are some challenges associated with getting there, especially if you are not particularly wealthy, since access is basically granted either through the wallet or the leg muscles and lungs.  Those with the bucks can take a train either directly out of Cusco or from several points between there and Aguas Calientes, the small town at the park’s entrance, but as of my writing there are only two companies to choose from for this service and they seem to be in cahoots with regard to a mutual neglect of competitive pricing.  Another option is to walk the Inca trail, a several day backpacking trip along the route originally used by the Inca themselves, but this one too is pretty expensive, illegal without a licensed guide, and generally booked out two months in advance.  So what’s left is the back door: arrival at what is called the hydroelectrica on the river Urubamba, either by foot from wherever you started or via seriously harrowing taxi transfer along a one lane winding gravel road with thousand foot drops off the left side most of the time and heavy truck traffic coming the other way as you round just about every tight curve, your driver blaring his horn more or less constantly in an attempt to avoid what seems like an all too likely head on collision, then the walk (+/- 2 hours) along the railroad track from where the road ends to the entrance of the park. You might be able to guess from my description 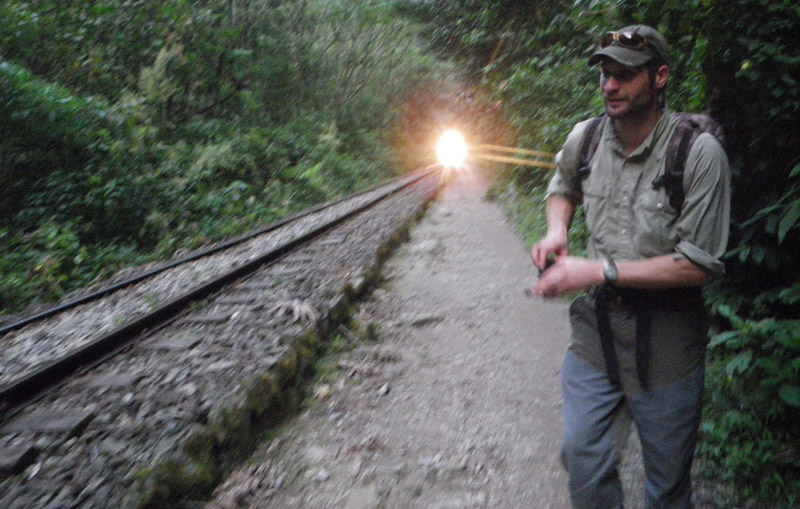 which route I chose on the way in, and also why I decided to go ahead and kick out the cash for a train on the way out.  In the end I am glad I did it the way I did, but to be honest as the taxi slid to a stop less than one meter from the grill of a tandem truck in the middle of one of the curves with the cliff edge just inches from the tires and me looking over it, head out the window, I knew it was a once in a lifetime experience for me.  I would walk back out if I had too. 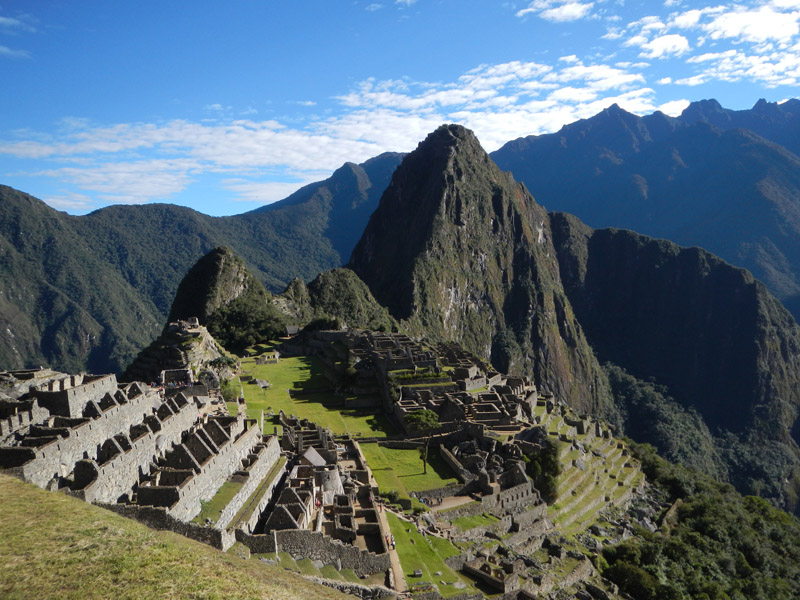 Arriving at Aguas Calientes after my escape from the cab and the walk down the rail line I was very happy to find that while rooms for the night were available for $1,500+US  there were also decent places to sleep for fifteen Soles ($5.50US), and that while many of the restaurants offered “American Menu” dinners at $50US a plate, in the market I could eat better food and drink the same fresh squeezed juices while sitting amongst locals and park staff for around seven Soles ($2.50US).  I was also surprised to find that the river, 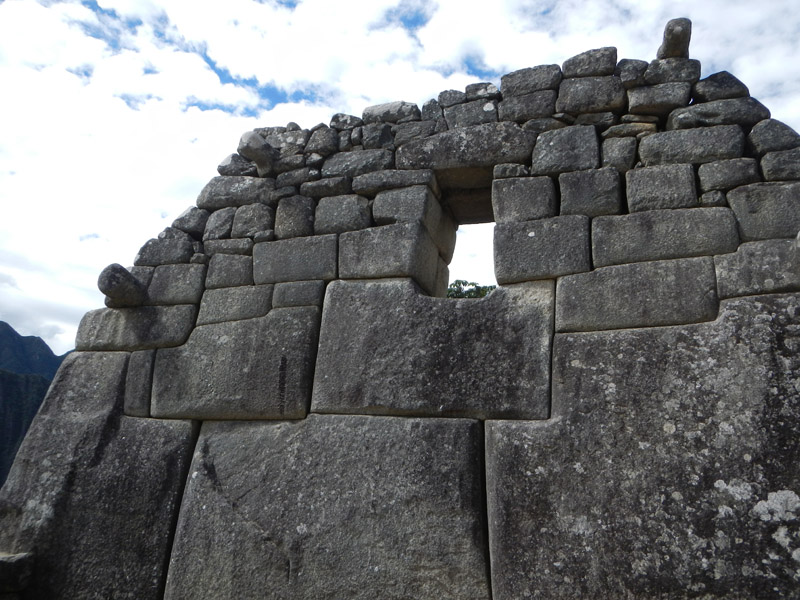 which I already knew to be extremely polluted downstream of Cusco, sported spectacular looking rapids, and also held trout!  Walking along its banks downstream from town that evening I encountered fishermen pulling smallish rainbows from the pools with the same coffee can setup some of my friends in Patagonia use. 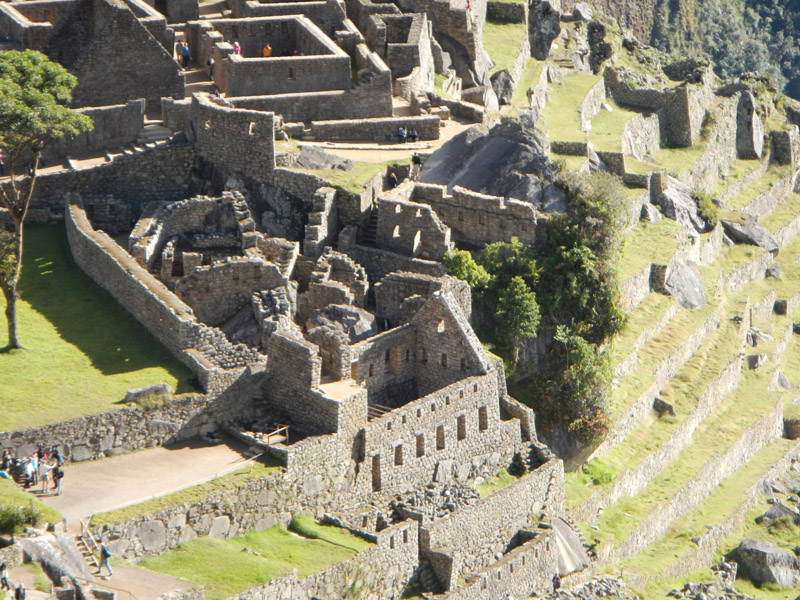 The next morning I headed up into the site itself (another choice between expensive bus, and walking a long stone stairway path) arriving to find brilliant weather and what has to be some of the most impressive topography on Earth.  It is no wonder Pachakuteq, the Inca (which actually refers just to the “king”, not to the whole culture) at the time of Machu Pichu’s construction beginning in 1438, chose this site for his masterpiece.  Too bad about his timing though; it was inhabited for less than one hundred years before Manko Inca, fighting a losing battle against the Spaniards and in the midst of repetitive outbreaks of the

same European origin viral epidemics that had been decreasing his culture’s population already for decades, ordered the city’s evacuation and the closure of all its entrances.  After that the jungle took back over, and the site remained more or less undisturbed until Hiram Bingham’s “discovery” of it in 1911.

Since that date the place has been through a lot – excavations, reconstructions, tourism “development”, long drawn out fights over artifact ownership, and now, two thousand people a day walking all over it.  But still, it’s really, really cool, and I just enjoyed the hell out of it.  Check out the pictures and then come down here and see it for yourselves folks – I highly recommend the experience. 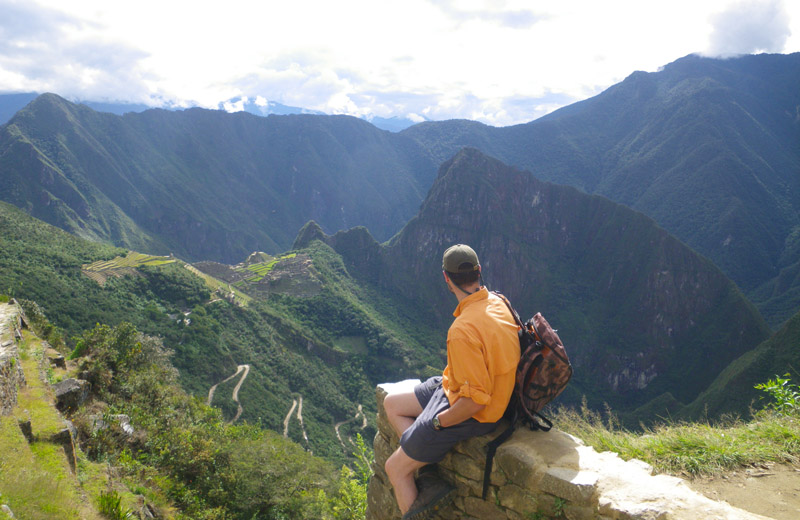