Wow, what a ride! Lately sometimes when I drive long distances in Patagonia I can’t help 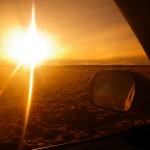 but wonder at what must have been going through my mind as I decided to walk across this country back in 2007. And Santa Cruz Province, more than any other place, makes me think I must have been insane. The vastness of this area, which holds a population density less than that of the Sahara desert, is practically incomprehensible. You’ve really got to see it to believe it at all, and our destination on this particular drive was right in the middle – of nowhere – for real. Arriving at the turnoff for Estancia Laguna Verde and coming from what is already one of the most desolate stretches of La Ruta 40 we were immediately slowed to a crawl. Low-4 was the

only way to go, because when I say crawl I’m not only referring to speed, I mean we were crawling the truck over an impressively daunting trail of ruts and boulders for the next hour. If you tried to drive this route at even twice the speed we went you would destroy the 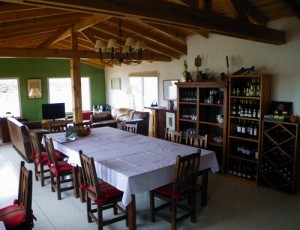 truck in a matter of minutes. Our Toyota Hilux took it like a champ though, and with some creative steering on my part we never even scraped rock once. Arriving at the estancia we were welcomed by its owner, Luciano Alba, and immediately treated to an impressive and very welcome tray of appetizers and an ice cold Quilmes, exactly what I had been dreaming about for over twelve hours all along the road from Rio Pico. Dinner was an equally impressive affair, thanks both to chef Lorena’s skills in the kitchen and to the very stimulating conversation as we got to know Luciano and his guides Brian Cavaleri, Nicolas Lengyel, and Juan Pablo Marchelletti and learn more about the area’s unique fishery.

Those of you who have been following this blog for a while may remember my earlier trips to the area, first during my walk when I fetched up on Lago Cardiel and Estancia La Siberia to the south, then later when I rode some border patrol routes with the Gendarmeria stationed at Tucu Tucu to the West. I knew I was not too far by map from these places, and could in fact even see Cerro Dos Cuernos from the trail on the way in, but it seemed as though my previous routes had simply skimmed the edges of this amazing fishery. 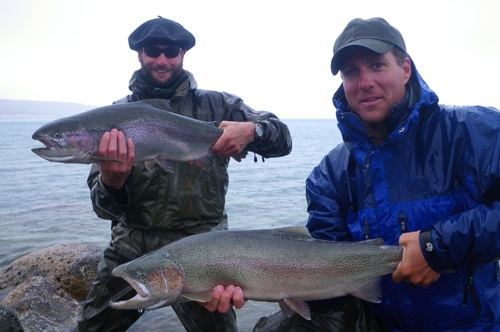 What makes Strobel so unique, my hosts told me, was the incredible population of scuds the lake produces, a seemingly limitless source of easily fed upon protein for the trout that were first introduced in 1995. I had heard from several people in the past that the 5,000 rainbows originally stocked in the lake fifteen years ago were triploids, but it turns out 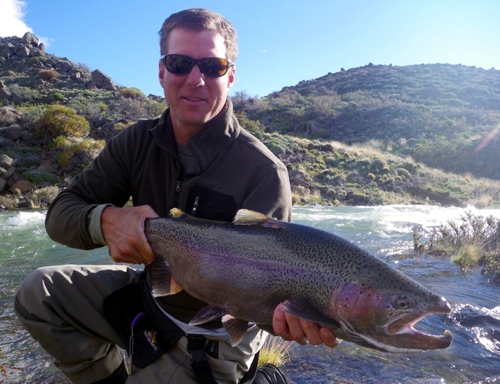 (thankfully, I’d say) this is not in fact true. The original fingerlings were normal 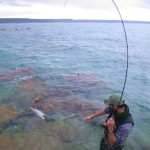 rainbows from an Argentine hatchery, which, upon finding themselves in what is essentially a giant trout candy store without adult supervision, have taken off and grown in both size and population ever since. The most amazing thing I learned that first night at the table though was that the Rio Barrancoso, the lakes only real tributary, now exhibited both a spring, and

a fall run of spawning fish. Were these rainbows turning themselves into great-lakes style pseudo-steelhead? Zach and I could barely sleep that night waiting for our first chance to get out there and find out. 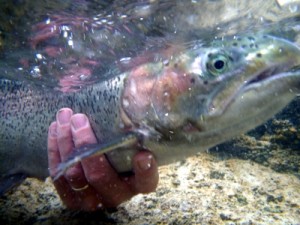 In the morning we awoke to an impressive spread of facturas which had been baked right there in the kitchen, along with cereals, other home-made breads, and all the juice and coffee we could drink to get us ready for our day. Normally I would have taken full advantage of this circumstance, but I couldn’t wait that long to get out on the water! So off we went, down the trail from Laguna Verde to the first protected bay on Lago Strobel. This was quite a moment for me. I had been trying to get to this lake by hook or by crook for more than four years, and had been daunted, dissuaded, and turned away by everything from forty-mile stretches of walking without water, to private property signs, to an uncommon but viscious attack by domestic gaunaco. Yet there I was, at last. The morning was calm by Santa Cruz standards and the water an incredible blue, and as we walked down to it from the trail I spotted my first Lago Strobel rainbow, a long, dark form cruising the sandy flat below us looking so similar to a Monomoy Flats striper for a second I was questioning my sense of space-time. Not for long though.

A fly fisherman confronted with a sight like that can begin to act in primordial ways, and I was stripping line and running along the beach before I had much of a chance to even think once, much less twice about what I was doing. I blew the first cast, throwing past his line of sight by a good eight feet which I took as a stroke of luck (very bad to catch a big fish on your first cast under circumstances such as these – worse than bananas in the boat for me) but pulled up another right away and laid it just in front of him. When he saw the fly he sped up and inhaled it, and five minutes later I was holding the first of what was to be dozens of the Lago Strobel monsters I had been dreaming about for so long. We fished the beaches and rocks all morning long, sometimes sight casting to cruisers and sometimes blind casting into the depths of the blue, and catching monster after monster until I actually began to understand how it might have occurred to someone to re-name the place Jurassic Lake. At one point we even landed a double that anywhere else in the world would have folks screaming “Photoshop” at the top of their lungs. After lunch though we headed up to the River proper, starting about a kilometer upstream of the Loop Adventures camp and working our way up from there. The Rio Barrancoso is nothing less than flat out incredible, so far exceeding my expectations it was mind-blowing.I had known about the lake for so long, this high-volume flow of crystal clear water tumbling into it over boulders and down through perfect classic runs, with pools full of twenty five to thirty inch fish in between was almost just about too much to believe. We decided to believe it though, and proceeded to catch these fish for the next several hours as we climbed our way up through the valley throwing a variety of big dries, rat patterns, and streamers, the majority of which were accepted by cooperative fish. I was really glad we had brought the net. 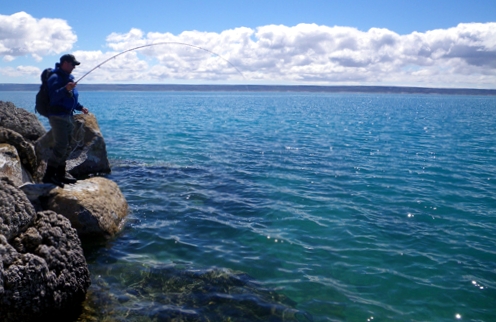 Back at the lodge after our first day on the water we were again treated to a wonderful spread and a good time with the staff and guests, and when Luciano asked me what I thought of the place and whether or not we would be adding it to the list of offerings at Patagonia Unlimited I gave him an enthusiastically affirmative reply. There are great destinations, and there is great service, and when you find a combination of the two then you’ve got something to offer that represents real value. This is one of those places. Zach and I spent the next two days wandering the estancia via Land Rover, four-wheeler, and on foot, and scoped out lots of good places to show our guests when we come back.  And we fished a little bit too.  Hee hee... I’m back in Esquel for a week or so of Power-Office, then will be headed down to Rio Pico again for a mix of the two worlds. Hope all of you up in the northern hemisphere are doing well. You should really come down and fish; I’m here.