Since the last blog entry I have done quite a bit I think. I went to see the glacier in some place or another to the east of El Calafate. Then I went up to El Chalten, but rather than spend the night I headed north straightaway and into the bosque. I have been in the wilderness north of El Chalten for the last several days and nights. I camped in the horse paddock at a remote outpost of the Argentine Gendarmerie on Lago del Desierto. The lake itself is so reliable for 16" rainbows that I never kept a fish anywhere else but counted on catching my dinner when I got back to my campsite each evening. The weather, as always, was off and on, but I think I enjoyed my share of beautiful days up there. I hiked, explored, and fished mostly. There is a much smaller lake called Lago Larga (Larga, for the rainbow trout in it) that is an hour's hike north of where I camped (very near the Chilean border). This lake was incredible. I only landed one big fish out of it, but he was a doozey, 21" and so fat and old and hook jawed that he weighed better than five pounds. I was broken off in snags by four fish that were probably close to thirty inches. That whole area is really some of the most incredible country I have ever seen. One of the highlights of my stay with the Gendarmerie was that when I asked them on a whim if I could borrow a horse for the day they said, "Of course!" So I took a big gelding for the morning and rode up over the pass and past Lago Larga and into Chile. What fun; it made me wonder if I shouldn't just buy a horse for the rest of this journey. I probably won't actually do it (at least until I am north of Coyhaique), but it is a thought. Supposedly I could get a decent one for around $300US. 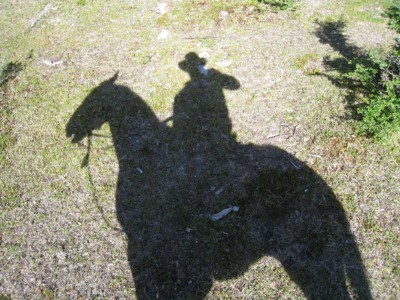 Now I am back down in El Chalten and will spend the night here in a hostel to clean up a bit. I may head out in the morning for Lago Strobel, or I may hang around town until Christmas and use the time to explore the national park. We'll see... Merry Christmas to all - I hope it is a wonderful one back home.