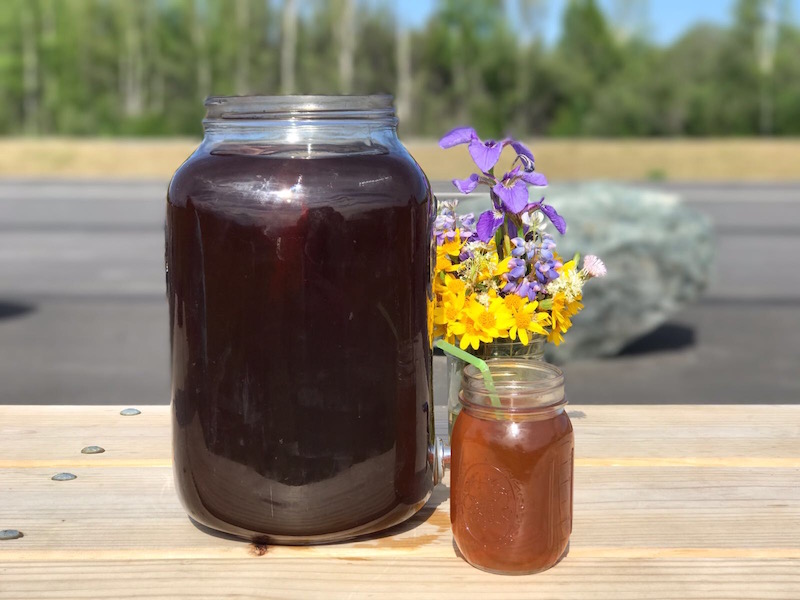 I tried this sparkling beverage for the first time in 2008 and fell in love with it from the first sip. My health conscious friend Gouzalia introduced me to it when we both lived in Los Angeles, a city that among many other things has a plethora of healthy food and beverage options.

The history of kombucha dates back over 2,000 years to China and Japan from where it spread to Russia and later all over the world. I remember when back in the '90s many of my friends’ mothers brewed kombucha in their houses. For some reason it never ended up in our kitchen and I didn't get to know its taste until much later.

If I were to calculate how much money I have spent on this beverage over the years, it would probably come to a significant amount. I drank an average of three bottles a week for 8 years before I finally started brewing it myself. 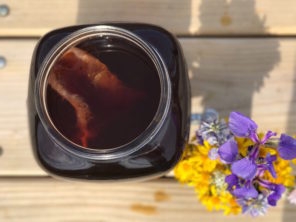 For those of you who are not familiar yet with this bubbly health elixir, Kombucha is a fermented beverage of black tea and sugar (from various sources including cane sugar, fruit or honey) that’s used as a functional food. It contains a colony of bacteria and yeast  commonly known as a “SCOBY” (symbiotic colony of bacteria and yeast) that is responsible for initiating the fermentation process once combined with sugar. After being fermented, kombucha becomes carbonated and contains vinegar, b-vitamins, enzymes, probiotics and a high concentration of acetic, gluconic and lactic acid.

I’ve been brewing this beverage for over a year now and tried different types of sugar: brown, cane, raw, regular white, and honey. I must admit regular (organic or not) white sugar works best for our liking. The preparation process is the following:

When we just started brewing this wonderful drink we used a gallon jar which wasn't enough for both of us. Later we got a 2 gallon vessel, consequently increasing sugar to 2 cups and tea to 16 bags. We determined that this amount also gives the best taste when let to brew for 14 days.

We had batches that came out either overly vinegary, too sweet, not carbonated enough or else when they were left for over 2 weeks due to our travels, contained too much bacteria (which resembles a jellyfish by texture), lacked sugar, or didn't have the right sugar. Just as beauty is in the eye of the beholder, the right kombucha taste is in the mouth of its drinker. If you have the time and like to experiment, not to mention save money and enjoy something of your own making, play with it and determine what works for you. And if you wish to drink kombucha not only for it's taste but also probiotics and qualities, here are the health benefits described by Dr. Axe and the journal of Food Microbiology: 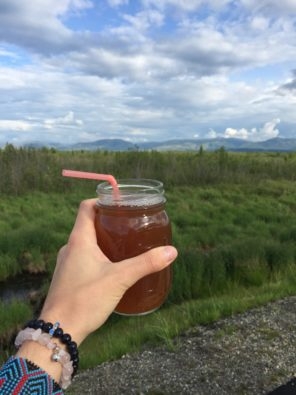 To read more about those benefits, visit https://draxe.com/7-reasons-drink-kombucha-everyday/

When we moved into our RV to live here full time I was questioning whether to bring a 2 gallon jar with us or not. Space is of value here. I was also concerned about it spilling when we are driving, filling the space with smell. But we found a perfect place for it where even a bit of spilling is not a problem. We keep the glass jar in a pan shaped silicone form which keeps it from slipping and tilting over. So far in over 15,000 miles on the road we haven't had a problem with it.

Bottling kombucha in house conditions is not a problem. It isn't a problem in the RV either as long as we are staying in the campground and are connected to water. I boil the bottles and caps and thoroughly clean and wash the vessel with vinegar because soap or other chemicals aren't recommended to come in contact with these items in order to avoid killing of the SCOBY.

For some reason on this current road trip across Canada to Alaska I haven't been drinking much kombucha. It probably has to do with cold and rainy weather when I crave a warm beverage instead. Justin, on the other hand, drinks it everyday. So I have to keep it coming for him.