Hola everyone. I am now in Chile. I crossed the border a couple of days ago and decided to head South yet again to try and reach Parque Nacional Lago Jeinimeni. When I got to Chili Chico though, no one in town seemed aware of the park's existence, and most insisted that it did not exist! I struck out for the South anyway, more or less on the far side of the river that I had followed south before in Argentina, and kept going until I ran out of food. I camped two nights on the Rio Jeinimeni, ate lots of twelve inch rainbows, and had a good time.  When it became apparent though that I was not going to make it all the way to 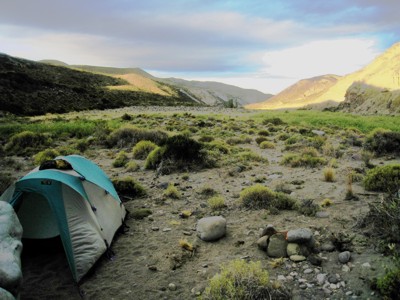 the park without starving or going to a fish only diet I walked back out to the road and started to head back north. After three hours of climbing out of the canyon a southbound vehicle approached and the driver stopped to talk. Continuing the trend of my good fortune, the fellow driving it was a mining company exec from Utah, and was headed to fish Lago Jeinimeni in the park that I had been trying to reach. So I climbed aboard and we drove out there to fish for the day. It is so strange when you are on foot most of the time to suddenly find yourself in a vehicle traveling along at 100+ kilometers per hour. It sort of gives the theory of relativity a whole new meaning for me. The park was absolutely beautiful, although the lake and nearby river produced only the standard 8" to 12" rainbows and browns. I am now back in Chile Chico camped on an apple farm (orchard?), and will likely head West in the morning. I hope you are all doing well back at home.