Hi everyone; sorry for the long-time no update. I had to spend some time up in the states 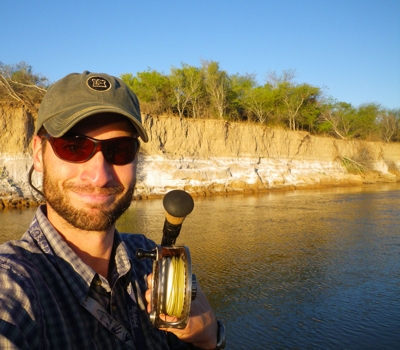 doing business of a sort that involves plenty of suits and ties and meetings but no rowing whatsoever, and as such is not worth mentioning, but I’m back and that’s all that matters now. The trout season down south hasn’t started yet though, so Ana and I thought it might be a good time to take a trip north, and we are now in her home town of Santiago del Estero: land of the Chacarera, whole families (of eight) crammed onto one mo-ped careening down narrow streets, and home security systems made from lines of broken bottles stacked atop every backyard wall. Ahh, Santiago. Seriously though, the place has its charms, including being able to buy three kilos of strawberries for ten pesos (about two dollars and fifty cents)! Yesterday while visiting one of Ana’s aunts I found a whole collection of enormous fossils piled under a table in her backyard, covered in cobwebs and dust. Most of the bones were mandible pieces, with huge teeth intact, and from what I could tell had come from some enormous prehistoric something or other (you can see that my paleontological skills are acute). Seriously though, when I placed them in what I think was a more or less anatomically correct composition on the grass, it looked to me like the creature’s head had to have been at least three feet wide, and probably more than five feet long. Whatever it was, it was big. The aunt’s son, who is a construction worker, had found the fossils during an excavation at a worksite somewhere in the city, and had piled the things under the table in the backyard when he got home and never touched them since! I’ll be working on him to try and turn them over to the university so we can find out what they are. I did a bit of fishing as well the other day on the Rio Dulce downstream from the city. I had no luck and was able to cover very little ground on foot, but two boats passed me late in the afternoon and both of them had stringers of Dorado that looked to be in the five kilo range, all of which had been caught on some sort of chunk-bait. I am headed north in a couple of days, up to Salta, and will take a look at some of the rivers up there as well. Look for another post soon.