Happy Halloween everyone! No Trick or Treating for me, but after several days of shelf- 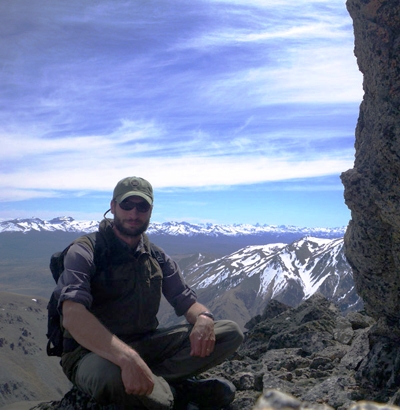 building, box-unpacking, and appliance-buying, trying to get the new apartment set up, I finally escaped the house for a bit to go climb one of the mountains overlooking our fair city. So I got up early and walked into town to the designated meeting spot of the local “Club Andina”, a group of people who apparently get together once a week to climb a different mountain in the Esquel/Trevelin area. I must admit, when I fist saw the group, which was made up of twenty-three people who looked to range in age from about seven to maybe fifty-seven, I wondered for a second what I had gotten myself into. Was this to be a long, slow, boring walk in the park? Five hours of pretty fast hiking and fourth-class climbing later, standing at the top of a six thousand and some-odd-foot mountain with all but five of those folks, it was clear that my concerns had been entirely unfounded. This group isn’t messing around! Those of you who have known me for a long time will remember the years when I dedicated myself to various forms of rock, ice, and mountain climbing with a similar level of obsession to what I exhibit in my fly fishing now. Suffice it to say, I’ve done some time in high-angle environments. And perhaps that explains how I so gravely underestimated the day’s activities in those first few moments of “sizing up” the group at the base of the mountain. But I am here to tell you now; by the time we got back down to Esquel, this writer’s legs felt like they were made of Jell-O. What fun! I hope to keep doing it whenever I am in town at the right times. Who knows, maybe my legs will even re-acclimate themselves to the task. Now for the really good news: Patagonian fishing season opens tomorrow! I’m headed south now; first to Rio Pico and then on down to Lago Strobel/Jurassic Lake, my old stomping grounds in Santa Cruz province. I hope you’re all having a great Halloween. I’ll post another update as soon as I get back.