Hello everyone;  I know it’s only been a few weeks, but when you’re at the oars and running the net all day every day it seems like longer.  This actually works out to be kind of a bargain though, if you think about it, as a way for me to stretch more life out of 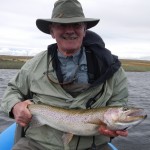 my meager allowance of time as a human being here on Earth.  As for the fishing itself, things have been pretty darn good.  Several days with sun and very little wind have produced great catches on dragonfly dries out on the lakes at the junco lines, 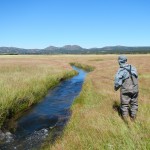 and the hopper action in the spring creeks around Rio Pico has been just unbelievable for the clients.

It’s always a bit strange though coming back up to Esquel after being out on the water for so long down around Rio Pico, and this time was no different.  On my first trip to the grocery store last night I found some fascinating us 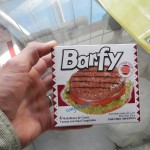 es of marketing print that I thought I might share here.  “Barfy”, believe it or not, is actually a brand of frozen hamburgers here in Argentina, and although I have not actually tried them, they seem to be quite popular with the locals.  “Bimbo” 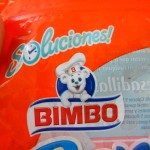 makes dough for empanadas, and as for the Seven Color Crystal Boll – well, all I can say is that I was tempted to buy it just to see what the heck it actually was, or maybe even as potential fly tying material, but in the end instead of helping me “too much”, it freaked me out a little too much, so decided to leave it lay. 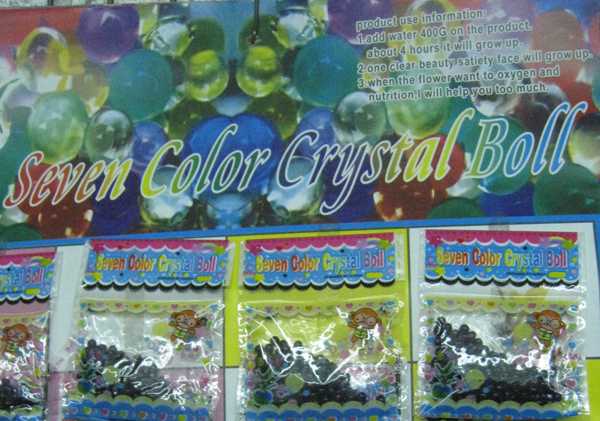 I’ve got about a week off now before heading out with the next group, and as such started out in the office splitting my time between taking care of business at the laptop, and taking 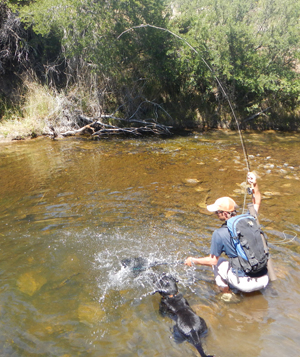 care of business at the tying bench.  In the interest of efficiency I am looking into building some sort of physical bridge between the two; I’ll let you know how that works out.  But after a few days of this I needed a break and a little fishing seemed to be in order as well, so Trey Scharp, Rio the black lab, and I took the day off together and hit a little seldom-fished stream somewhere outside Trevelin, forgetting all about the laptops and the tying benches for a whole entire day.  And a day filled with hoppers and rainbows to boot!  We walked a long ways, but the fish (all rainbows) were bigger than average for that kind of water, and spread out at just the right intervals to keep the action going all day long, and all three of us 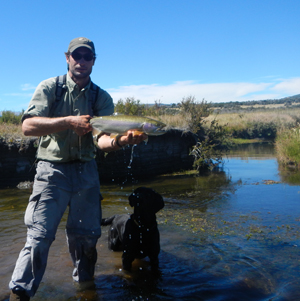 had a really good time (Rio even got into a big covey of quail).  The weather was just right for wet-wading too.  I’ll admit, I didn’t even think about all the stuff waiting for me in the office even one single time till I got home.

Hope you’re all doing well wherever you are and whatever you’re up to.  Don’t forget to drop me a line every now and then; I look forward to receiving it soon!