March 9, 2010
Fall Rollin’ In and the Fishin’ is On
by Administrator

We have had an absolutely wonderful week of weather around Rio Pico, and Sal, Zach, and I have taken full advantage of it and fished hard. We started out doing some small stream stalking over on the other side of Las Pampas, but after a whole day of sneaking up on terrestrial eaters we were ready to get back in the boat for a bit. I had better not 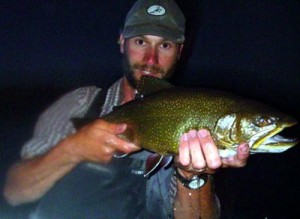 name the lake that the fat female bow pictured here came out of, but suffice it to say it is one of the numerous smaller and seldom fished bodies of water that are accessible from Rio Pico if you have a four wheel drive truck. Actually there are several of these small lakes in that immediate area, and since we wanted to fish a few of them all on the same day we ended up declining to take the boat down in between and elected to have Zach stand in the back of the truck and hold onto the boat during “portages”; Ha! (It worked out alright). Next as part of my 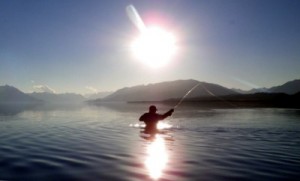 continuing exploration of all the tributaries flowing onto the Corcovado river between Lago Vinter and the Chilean border we decided to tackle an easy one, the Arroyo Gaucho. This is actually the first significant stream to meet the river after it leaves the lake. The walk was pretty long to reach the confluence from the road, but the fishing turned out to be decent, at least near that point. Several very nice rainbows and a few bigger than average brook trout were hanging around the area where the two waters meet, but what we found as we worked our way back upstream on the Gaucho was that it was absolutely filled to the gills with tiny, tiny fingerlings. Deciding to make a base of operations closer to 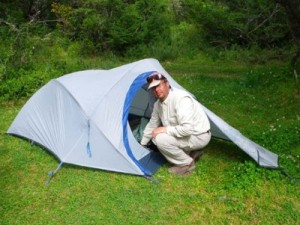 the boca than to town for a few nights we pitched tents at “Camping Nikita” on the South shore of Lago Vinter out near the Chilean border. Nikita himself is a fine gentleman of Russian decent who is known equally throughout the region for his generous hospitality and for his excellent self-branded vodka, two traits of character that, when combined, can have a literally intoxicating effect. I must say, the vodka is the best I have ever had. Nikita makes the rounds each night to visit each and every one of his guests in the camping area, and by my count, consumes at least eight shots of the stuff at each campsite, seemingly without effect (on him). The rest of us, well... are affected. 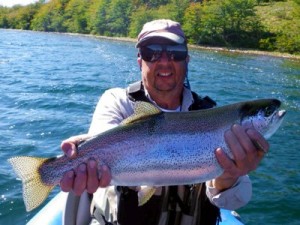 These nights at Nikita’s marked a significant event in Sal’s life as a fisherman, being the very first nights in all his sixty seven years that he had ever spent in a tent out of doors. As it turned out he was perfectly comfortable and had no problems whatsoever with the adjustment, though how much the vodka may have helped we’ll never know. Those evenings we fished the boca itself, where the Corcovado leaves the lake, swinging smallish streamers across the current until Simmich (the guarda-pesca permanently stationed at that location) came out to tell us that it was too dark, and as such that the fishing was over for the day. I caught the very nice brook trout pictured here about five minutes before the closing announcement that first night, right about the time the real bit was getting under way. The law’s the law though, and back to camp we went. Next we tried out some of the lakes up on the other side of Vinter, lagos Falso Engano and 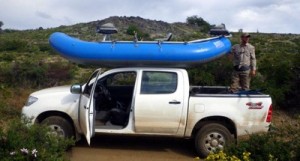 Berta Superior, one of which has very large but mostly disinterested (in flies anyway) brook trout swimming around in it, and the other of which is chock-full of smallish (14” or so) but very eager brookies and rainbows that eat flies with reckless abandon every chance they get. Each subsequent night we would then head back to the boca which continued to produce mixed results, then back to Nikita’s which continued to produce the same result. Overall the fishing has been quite excellent, and the food and fireside conversation outstanding. And the best news yet is that there is still more to come!