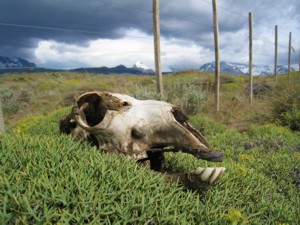 Hola folks, and Happy New Year's Eve! Since I left El Chalten the road has been pretty hard. A smarter individual than myself would have researched this route in advance, but alas, I did not. It turns out that "La Routa 40" headed up this way for over 400 miles is the driest, most desolate and deadly stretch of road in all of Patagonia. I just sort of looked at my map, saw a stream crossing the road every ten miles or so, and took off, heading north parallel to this route and closer in to the mountains.  The first day out of El Chalten I walked more than thirty miles before I found the first water, and it was only a trickle. All of the streams that the map showed were dry as a bone (and most of them full of bones); they are seasonal drainages at best. By the time I reached Estancia La Siberia I was in pretty rough shape, dehydrated and half mad from the wind, with big mean blisters on the balls of both feet. Then straight away I got attacked by a territorial guanaco, which after biting me several times and trying to run me over was finally dissuaded by several very hard punches in the nose. I didn't realize until I heard the gaucho laughing at me that I had been screaming like a little girl through the whole event. I spent two days and two nights there, tried to fish Lago Cardiel in winds that bent my 8-weight more than a ten pound fish would have, found and ate a lot of calafate berries, and luckily was able to hitch a ride to my current location, Gobernador Gregores. The good news is, I have food and water here and can try to rest a bit and get over the cold that I have come down with. The bad news is, this is a mining town, on the edge one of the biggest mines in Argentina, and it is a pretty rough crowd. Steven told me to stay the heck out of these towns and now I can see why. I am still in the middle of nowhere and have to get back over to the mountains and several hundred miles north before I will be back in hospitable country again. Oh well; I'll work it out somehow. Hope everyone is well and has a great New Year's Eve.  Love to all.