I never did honestly cast a fly today but I am going to count the exploratory mission nonetheless, especially since I saw twitter-pating Pacific salmon, and that is not an everyday occurrence for me. Having secured permission 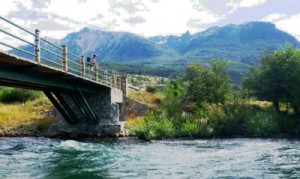 for Zach Otte, Ana and I to walk up the river road on Estancia Poncho Moro the three of us headed out this morning to try and explore the lower Corcovado canyon and see about getting a view of the falls. So we started out mid-morning from the Estancia main gate and were as excited as could be upon crossing the bridge that Mr. Wells put in to see two enormous Pacific salmon rubbing up against each other in the current, twitterpating right below our eager eyes. 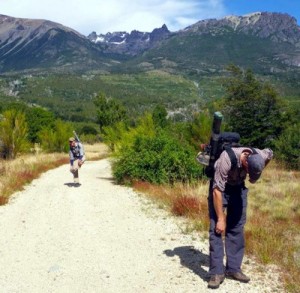 Within an hour and a half or so we were at the end of the road and the beginning of the canyon, all of us with socks and pants and everything else absolutely full of spiny little seed pods. This point turned out to be more or less the same point that I had turned around at on my Commisario trip a few days before, though on the opposite side of the river. The canyon soon showed itself to be as un-passable there at riverside as it was on the other bank, with sheer cliff walls falling straight into class five rapids, so we attempted to climb a side canyon and go around, but that was in the end a no-go too, with pretty sketchy fourth class scrambling and a very nervous wife standing between us and our objective, which was to find the falls that block the salmon and browns from climbing to the lake. So we back-scrambled a ways and left Ana reading a book by the river while Zach and I climbed up another canyon wall and made our way 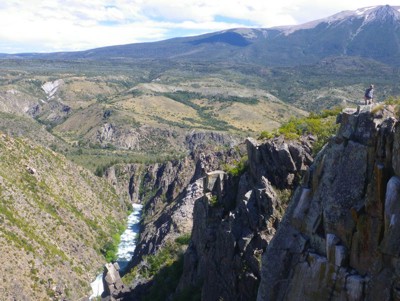 along the main rim and around several more side rims until it was too late in the afternoon to go on. We stood on the edge and looked down from our farthest point on what had to be the longest continual rapid in Argentina – nothing but roiling white as far as we could see in either direction, which was at least several miles both ways. As awesome as the view of the river was the view of a condor riding thermals below us, offering a unique and seldom achieved perspective on its distinctive white wing stripes and enormous breadth of graceful, if smelly being. It was all enough to make me think more than twice about my upcoming walk at the end of the season. Descending to find Ana again took a bit longer than we expected but was accomplished in due time. We had by then decided to actually fish for the salmon under the bridge but when we got there we found some junk-chuckers who had been inspired with the same idea and had already run the fish off. Oh well. It was still better than a day of work.