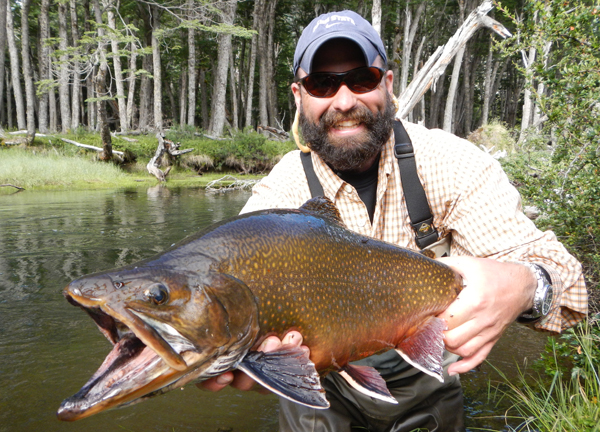 OK, so he’s not really an Afghan refugee, but my client these past two weeks did come down here directly from Afghanistan, and with Brook trout specifically in mind.  So, after some great days chasing browns and rainbows around the area of Rio Pico, we struck out for the south into some of the country Zach and I explored back last month; a cold front, wind, rain, and even snow on our heels and shortly thereafter on our heads.  The weather put the fishing off just a bit, but not enough to keep us from success, and the whole trip ended with a climactic series of events that I think warrants description here, if only for its singularity with regard to fly selection.  Walking the river downstream from camp our last day out the weather had started to break, giving us just enough light between the clouds to spot four nice fish in a deep bend pool that luckily had a concealed casting position just above it.  I picked a stand where I could watch the fish and sort of whisper-yell instructions up to Eric, who’s first cast with a fairly normal brook trout fly hooked the smallest of four fish, a hen of about five pounds.  He landed this fish and was quite happy, but I could see that two of the other three fish in the pool were quite a bit larger, so we tried the whole sequence again with a new fly on the tippet right away.  The next hook up was a short-lived event, with a slightly bigger fish pulling free from the hook within a matter of seconds, leaving only two more in the pool who had not yet felt the sting.  A third fly was tied on, and a few casts later the third fish was hooked, played and landed, proving to be a nice six pound hen and seeming to bring our sequence to its conclusion.  That fourth and final fish in the deepest part of the pool stuck in my mind though, and since we were already there, and not in any hurry, I thought we should at least give him a try.  I couldn’t see him very well, but he looked to be long and dark, so we tied on a very large streamer and ran it over him a few times.  No reaction.  Another streamer was tried and results prove to be the same.  “Of course”, we thought, “the fish was spooked.”  We’d just landed all three of his companions one after another and returned them to the pool, and the game was up.  But as a last and final resort, I looked deep in my backpack, and found, – the Circus Poodle.  This is a fly that had no business even being on this stream, or any stream really, for that matter, but it was in one of the boxes at the bottom and was so different from anything else we had tried it seemed like it might be worth a shot.  At almost seven inches long and dressed like Liberace’s dream Queen on new year’s eve, it was definitely not like anything else this fish had ever seen, artificial or otherwise, in his little stretch of Patagonian stream.  If the Circus Poodle didn’t raise him, I figured, we’d move on.  Out went the line; down splashed the fly in a moon-capsule crash at the back of the pool; and Eric started to strip (for those of you who might not actually be fly fishermen, this means he was pulling in line, not taking off his clothes).  The Circus Poodle danced, climbing its way back to the head of the run, white marabou, red plastic beads, and long rubber legs all waving around looking as alien as could be in the darkness of the water.  Then out of the depths shot a big mean looking shape, and the next thing we knew there was nine pounds of Salvelinus fontinalis tearing around the river shaking its head like it had just eaten the worst-dressed dog in the world and wanted none of it more from there on out, which made perfect sense if you think about it.  We had to land him first though, and we did, but it wasn’t a sure bet in either of our minds until the second he was in the net.  Honestly, I could hardly believe my eyes.  What a fish!  Eric had his picture taken with the Shaman King and then we sent him on his way, the moment after seeming just about right for a cigar break and reflection on the value of what’s left of wild places in this world.