Hey folks, sorry for the long time-no-update. I attended the Cherry Festival last Friday, which was really neat, and then headed south along the Chilean/Argentine border. The first ten miles or so were awful, with the wind so strong it was blowing the road itself and half of Patagonia right in to sandblast the skin off of my face. No water, and visibility so limited 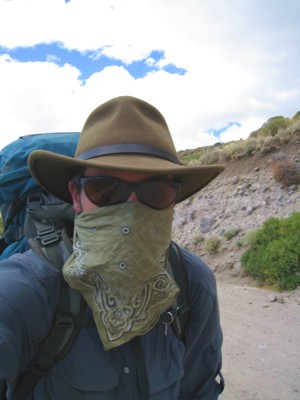 that I have no idea what the scenery looked like.  Then the wind dropped and I found myself in one of the most beautiful valleys I have seen anywhere in the world. Just incredible scenery. The problem was that as the miles ticked away and nightfall neared I was completely out of water and every streambed I crossed was, you guessed it, dry as a bone. I could see the river that is the actual border far, far below me, but was quite hesitant to hike down there and have to hike my way back out before nightfall. As the hours and the miles ticked along I got hungrier and hungrier too, but felt compelled to keep going until I found water. By the time evening was coming on I started to have this ridiculous daydream about coming upon an estancia. I would go up and ask for water, and there would be nice people there and they would invite me in and feed me and let me spend the night. I laughed at myself for this silliness, but it was a nice daydream. Then, at mile twenty three for the day, I crested a ridge and there, far below me, was an estancia. Trying hard not to get my hopes up as to the hospitality of its residents, or even the existence or residents, I made haste in the direction of the trees that surrounded the place. I arrived just at dusk and found two men and a woman sitting on the 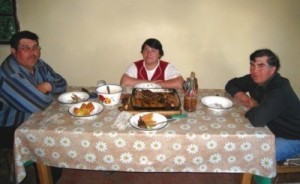 porch. They watched my approach without stirring. I hailed them from a ways off and asked permission to enter the gated yard, which was granted. I explained who I was and what I was doing there and asked if I might be allowed to fill my water bottle from their tap. The larger of the two men pointed then towards the river valley, and said "There is a river seven kilometers in that direction, you can fill your bottle there." My heart just sank into my shoes. Then he laughed, rather heartily, and said "I'm just kidding!; Come in and eat, dinner is just now ready." I nearly burst into tears as the other two peons started laughing too, and we all went inside to eat. They fed me a ton of baked mutton and bread and salad and these incredible egg cake things that were full of herbs and I swear it was one of the best meals I have ever eaten in my life. What amazing people! They laughed a lot too at how much water I drank with the meal. They did in fact invite me to spend the night, and the woman even went out to the hen house to fetch me a half dozen eggs for my breakfast. I wondered for a long time that night what I had done to deserve this sort of thing, and settled on the "charmed life" theory that more than one person has proffered of late. After dinner I got another treat, as it was time for the two peons to slaughter another sheep for the following day, and they let me watch and even help. What an experience! Estancia Los Corrales is enormous (I think 40,000 hectares), and is owned by an elderly invalid who lives in Buenos Aires. There are five peons in total that work it, and something like 50,000 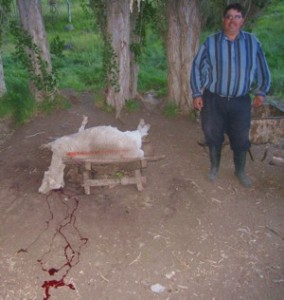 head of sheep, 20 horses, several dozen free-range chickens, five cats, and a dozen or so dogs including the two cute puppies that played with my backpack straps endlessly. We worked together on the sheep for a few hours until the meat was hung and everything cleaned up and then I pitched my tent in the yard and fell into a very deep sleep. The next day I hiked down to the river on the Chilean border and fished all day, catching lots and lots of rainbows and browns of more or less Turniptown size, which I carried back in the evening for the folks at the estancia. We ate dinner together again, and then I headed back out onto the road in the morning, headed south. Next - Upon leaving Estancia Los Corrales I walked south again for several hours through great scenery until I ended up back on Route 41 and was picked up by Gustavo E. Martinez, one of five ministers to the General de la Gobernacion, which is like the governor of the province I am in. He and his wife had attended the Cherry Festival as well, and happened 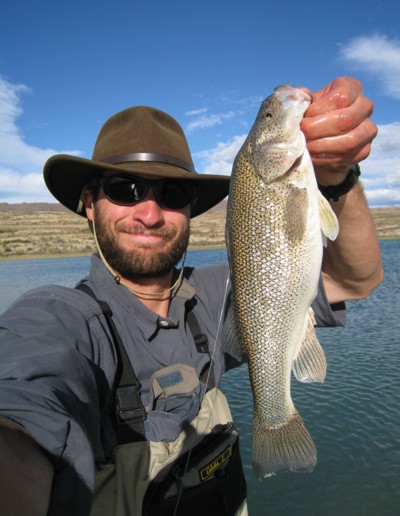 to be headed to roughly the same place I was, so I rode along in their nice new Toyota for a few hours until we reached the land-bridge separating Lago Posadas from Lago Pueyrredon, where I got off and made camp. I fished that evening in terrible wind, and once again felt more like I was surf fishing for stripers in Chatham than for trout, but oh well. I caught two fish, both of them percas (the local perch, an indigenous species), and ate one of them. I fished there all the next day with no luck, then moved on down the lake fifteen miles to a campsite that was protected from the wind and again had no luck. Later - Waking up at the campsite on the lake and making breakfast I ended up in a conversation with a nice fellow who was taking his family to the Cueva de las Manos that day, and 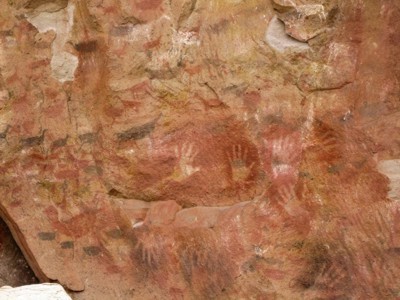 offered me a ride. Well motivated to get there, and not having found the fishing in the lakes to be particularly good, I accepted. The family turned out to be really nice, and within a few hours it felt like I was one of the kids. We drove all the way back out to La Ruta 40 and up to the cave, which was incredible, then back up to Perito Moreno, where I am camped now once again. Likely headed into Chile tomorrow; I hope all is well with everyone back home. Be good.