July 27, 2017
Canada West – Across the plains, over the mountains, and through the Yukon
by justin

And so it went; I passed river after river and lake after lake with patches of snow still on the ground and sluggish pike still holding deep and waiting on the lily pads to show up.  “Two more weeks,” the locals kept saying; “you’re two weeks early.”  Story of my life.  I blame my mother. 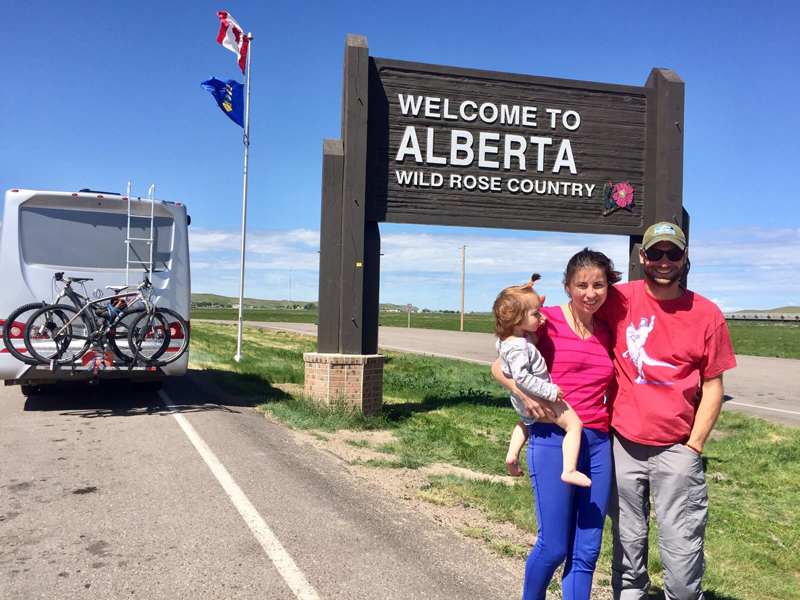 To be honest, for me, after Ontario Canada became a bit of a blur.  I mean, this country is huge.  Once we got away from Lake Superior and the topography leveled out, it LEVELED OUT.  Then it just went on and on like that, and there was more than one moment when I looked up and wondered if we might have made a wrong turn and ended up in Iowa!  Our first stop of memorable consequence on the plains was in Winkler, Manitoba, at the manufacturing and service headquarters of Leisure Travel Vans.  We had a few small warranty repairs to get done on the Elefante, and Khadizhat wanted to do a tour of the facilities.  I wasn’t really looking forward to this part of the trip, since I’ve never before had warranty questions with an auto manufacture go particularly well in the past, but they were barely even out of the way so it seemed to make sense to stop.  What a surprise the experience turned out to be!  I cannot say enough about the quality of service and accommodation provided by the team there in the service department.  Upon our arrival Steve Harder went through a point by point check with us to make sure he understood each issue, then gave us a loaner van for the day while they worked on the rig, and even washed and detailed it before giving it back and sending us on our happy way!  Cannot say enough about how good this experience was as compared with pretty much every other interaction I have ever had with an auto manufacturer post-sale.

Then the plains continued.  I managed to add several more birds to the list, including a pretty rare pair of Gray Partridge, an import from Europe that has found its foothold only in one small area of Alberta, which was pretty cool.  We crossed lots and lots of what passes for “streams” in country like this, all of which are called “ditches” by the local people, and I wasn’t much feeling the fishing until we got to a lake about the size of Vintter which called out to me from the map as we passed, singing a song that said it was full of monster pike and lake trout.  So I pulled us over and blew up the boat and left the girls on shore and began to row.  Skies were clear, sun, shining, and the day feeling full to the brim with possibilities.  About two miles from the rig I noticed that there was suddenly a bit of wind from the South, which seemed strange, especially since I could see an approaching front coming in from the North.  Not a good sign. In far less than the time it took me to sort through what this apparent atmospheric conflict might mean though the surface of the lake changed from calm and pretty to something like the inside of a snow globe being shaken by a hysterical toddler, and I realized that I was in trouble – half a mile or so from the South shore and suddenly in the midst of a storm that was threatening quite literally to pick the entire raft up off the surface of the lake and spin it away into the land of Oz!  Honestly it was all I could do to keep the thing upright and on the water as I was blown far faster than I could row towards the far side of the lake from where the girls were staring at me through the binoculars.  The wind just kept trying to get underneath the boat, and I was having to wrestle it back onto the surface.  Pretty difficult to describe, really, but I managed to get where I was going and even to make a slight adjustment to my trajectory so that I came to land on the grassy spot next to the cliff instead of up against the cliff.  By the time I hit the shore I was being pounded with hail so hard that I at first tried to get underneath the boat, but the wind ripped it out of my arms and made off with it.  I had to chase it down and then lie on it lest it end up in Montana somewhere.  Once the hail turned into simple stinging rain I pulled the iPhone out and shot a quick video, still simply astounded at what was going on around me, and slowly but surely coming to the realization that since Khadizhat’s WhatsApp message said she had gotten the rig stuck in the mud trying to get it off the lake shore on the far side and there was no way I was getting back out on the water, I had a long walk ahead of me to get all the way around the lake and back to the rig to sort the whole mess out.

What a ride!  Awesome day though.  One of those that is in no way in need of fishing success to make for a lasting memory. 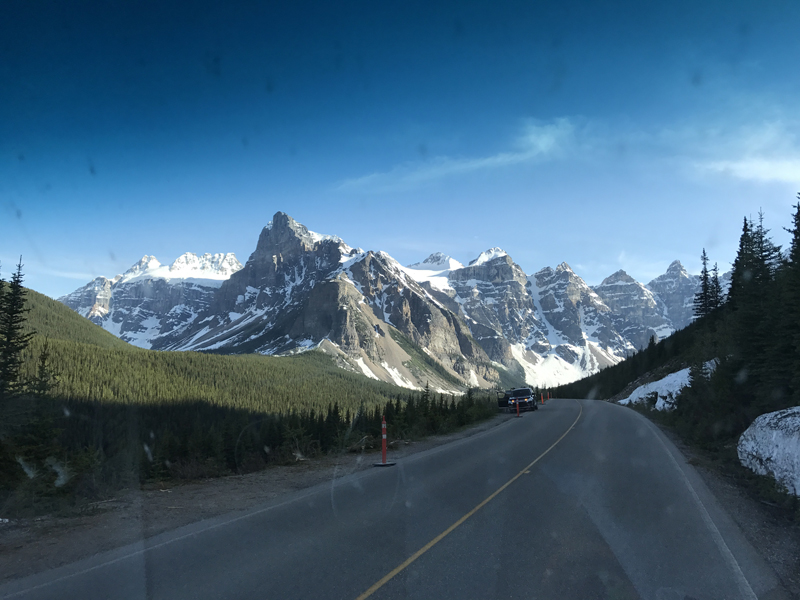 Pretty soon after that we arrived in the city of Calgary, which is one of the few if not the only city of this size on Earth that has a real trophy trout fishery (aptly named, the Bow River) running right through the middle of it.  Unfortunately for me, like the entire trip so far, I was about two weeks early and late here, meaning in this case that the river had been clear and fishing well two weeks before, but that the runoff wouldn’t calm down for another two weeks either, and in the meantime she was high and practically white with silt.  Oh well!  I did stop in and shoot the bull for a while though with the guys at Bow River Troutfitters.  Had a nice visit with owner Aaron Feltham and his right hand man Mark Storey, and the place looks like exactly what anyone traveling through Calgary who wants to do a float on the Bow or some time up in the park should need to get set up for the trip or put a man behind the oars.  They also spent some time on Google Earth with me and pointed me in the direction of the only water that made sense between there and Banff with all the runoff, a little spot tucked away behind a place called Dead Man’s Flats.  I won’t go into the story here on the blog of what I found when I put the boat in there, but anyone who is interested can ask about it next time we’re out on the water together.  Quite a story. 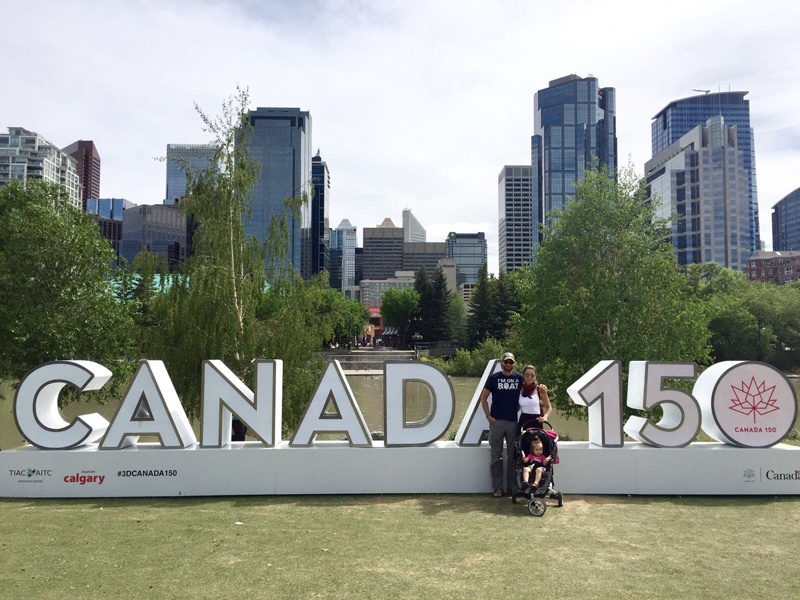 After the visit we wandered around the city which is beautiful and the girls had a good time in parks and on the abundant bike trails; then we continued North and West as has been our habit now for quite some time.

I had always wanted to see Banff, ever since all the reading and dreaming I did back in the climbing phase of my life.  And yes, it is a spectacular setting.  The rivers, lakes, and mountains are impressive even from the tourist pull offs, which unfortunately was pretty much all we got to access since the weather was so skittish and we were also running a bit behind on getting to Alaska. Plus, as usual, here the rivers were for the most part blown out with runoff and needed “a couple more weeks” before they would fish well.  I did however manage to pull some very nice rainbows out of one stream even in a driving rain! 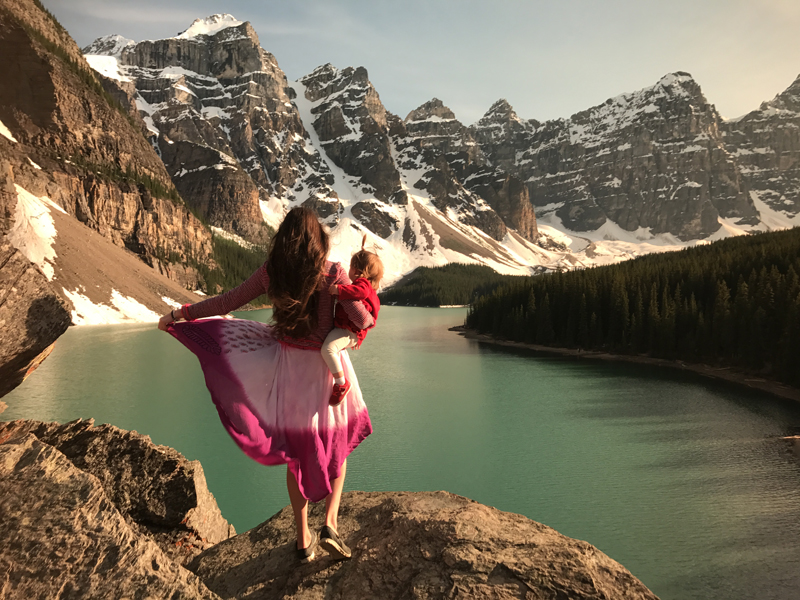 Continuing onto the Alaska highway the scale of the wilderness is beyond impressive.  And for a guy who has lived in Patagonia for a decade, that is saying something.  Literally days of driving through forested mountains and across rivers and streams that if you put a boat in and headed downstream wouldn’t have you running into people or other roads for weeks.  We saw so many brown and black bears we lost count, plenty of caribou and moose, mountain goats, and (literally) tons of bison! I mean, I guess tons doesn’t mean much when you’re talking about bison, but who knew there were so many wild bison up here, not even within the protective boundaries of national parks? At first I thought maybe we were just seeing so many because they were attracted to the new spring grass on the roadsides, but later hikes into the forest far off the road proved that theory false.  They’re everywhere!  Turns out this is a species called Wood Bison, and they are even larger than plains bison (20% by body weight), naturally suited to and native to these forests.  They’re actually the largest native animal in North America.  Very cool and kudos to Canada for supporting an environment within which this nearly extinguished species can thrive.

Another spot I had long dreamed of on the Alaska highway was Laird River Hot Springs.  This site is in a National park that is literally in the middle of nowhere, and is beautifully maintained and left mostly in its natural state! Lots of wildlife, awesome waters, and good campsites.  A must see! 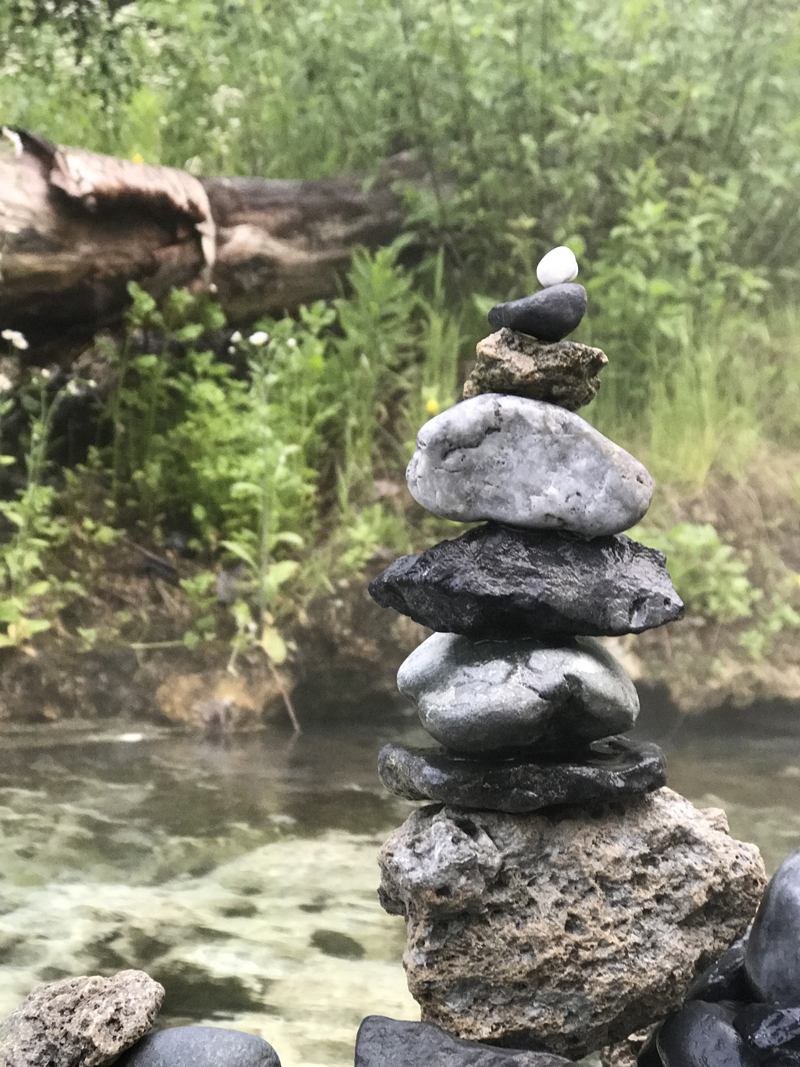 At our last campsite in the Yukon as we closed in on the Alaska border I finally got the boat out again and got into some pike, albeit fish only in the 25” to 30” range, which, for a pike, is not huge.  Lots of them though, and a lot of fun from the Waterstrider!  Even took Khadizhat and Aya for a ride out on the lake, and the boat handled all three of us just fine (don't tell the manufacturer)!

Kept a few and we had an awesome dinner cooking them plus kababs on the fire under a nice sunny sky.  Then it was onwards and upwards, to Alaska! 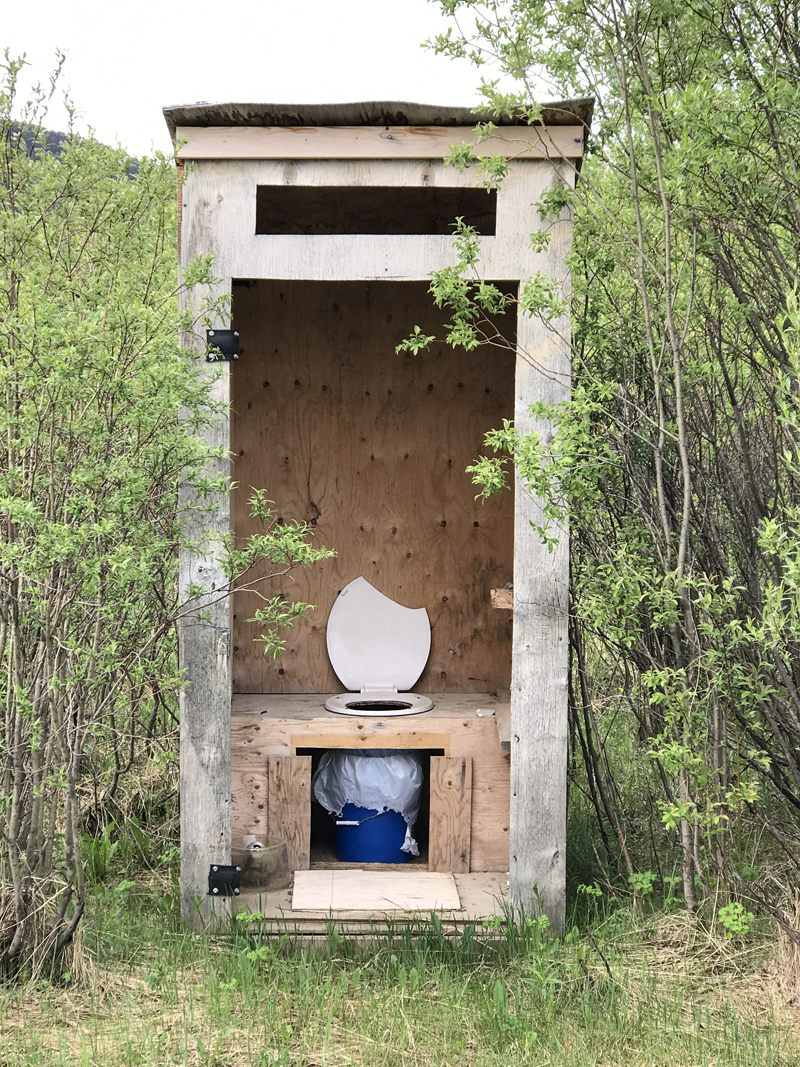 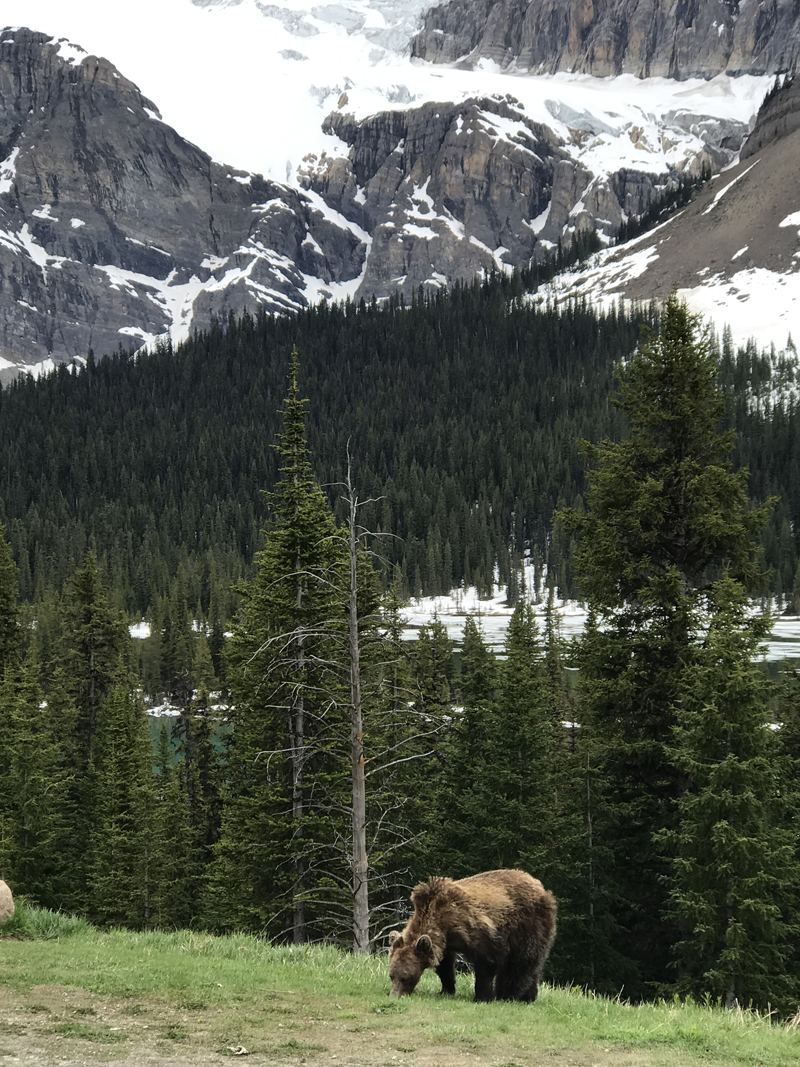 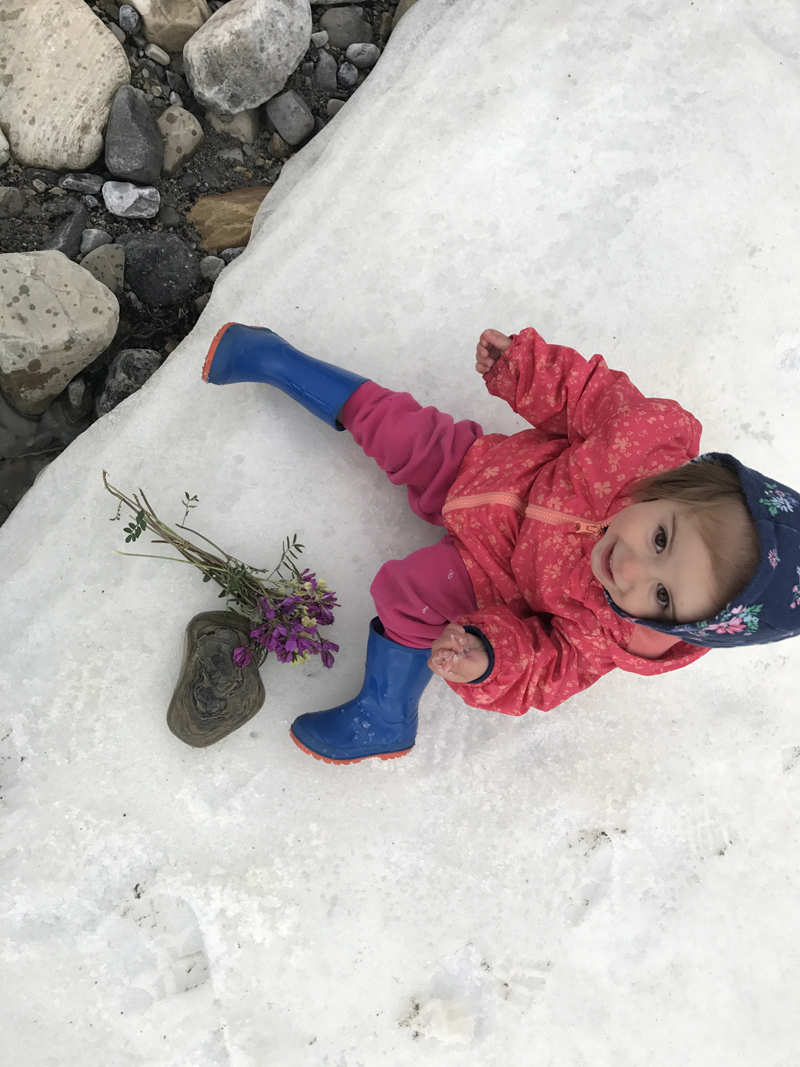 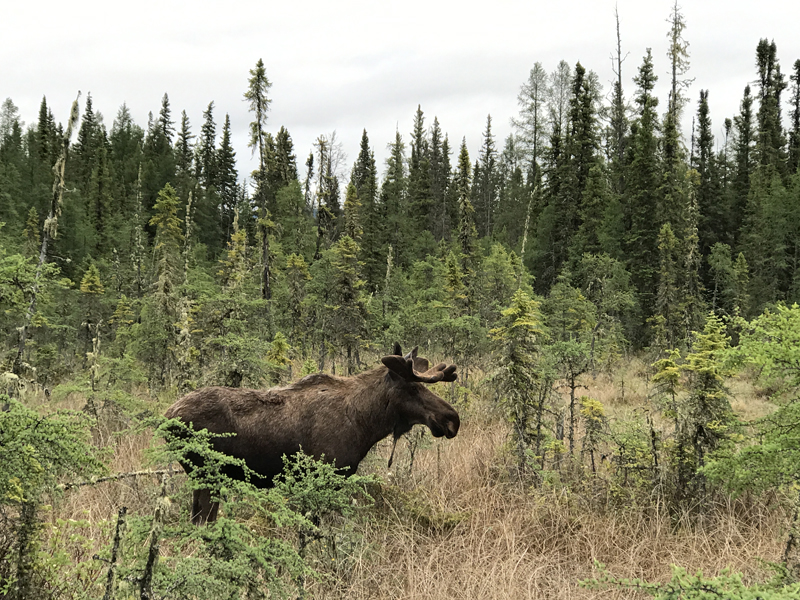 A cute tree carving we found (NOT that we made): 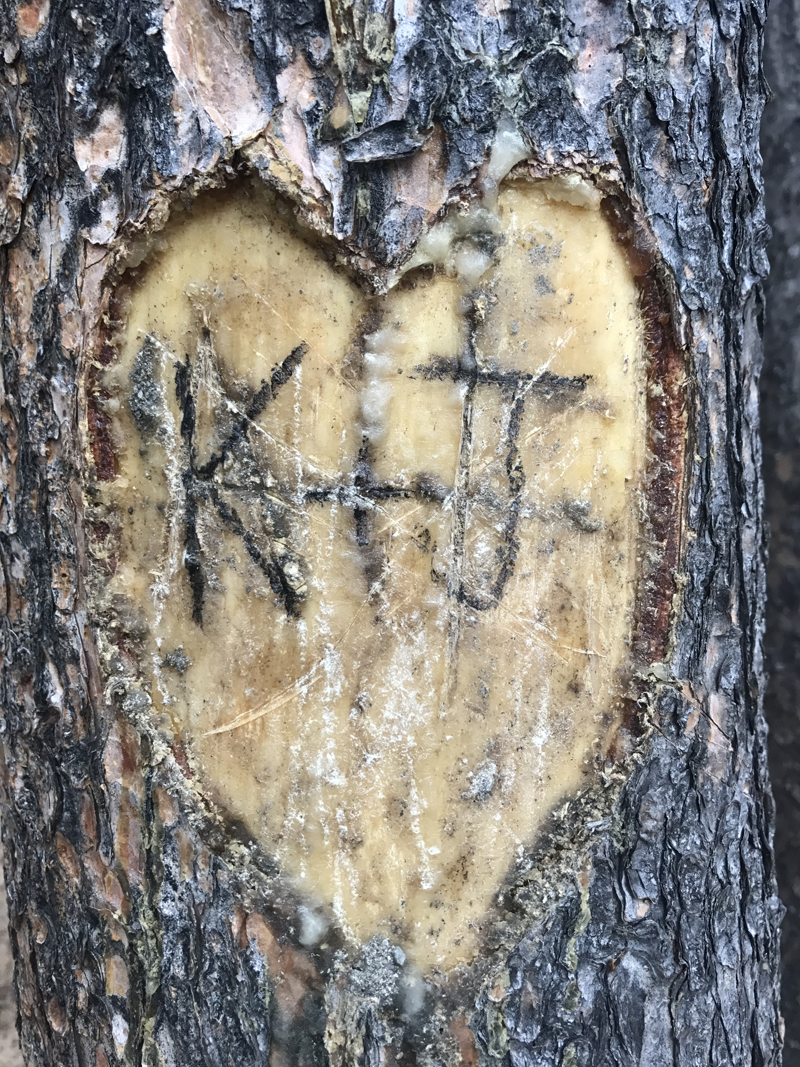 Canadian signage kind of cracks me up (what the heck is that icon on the top row in the middle?): 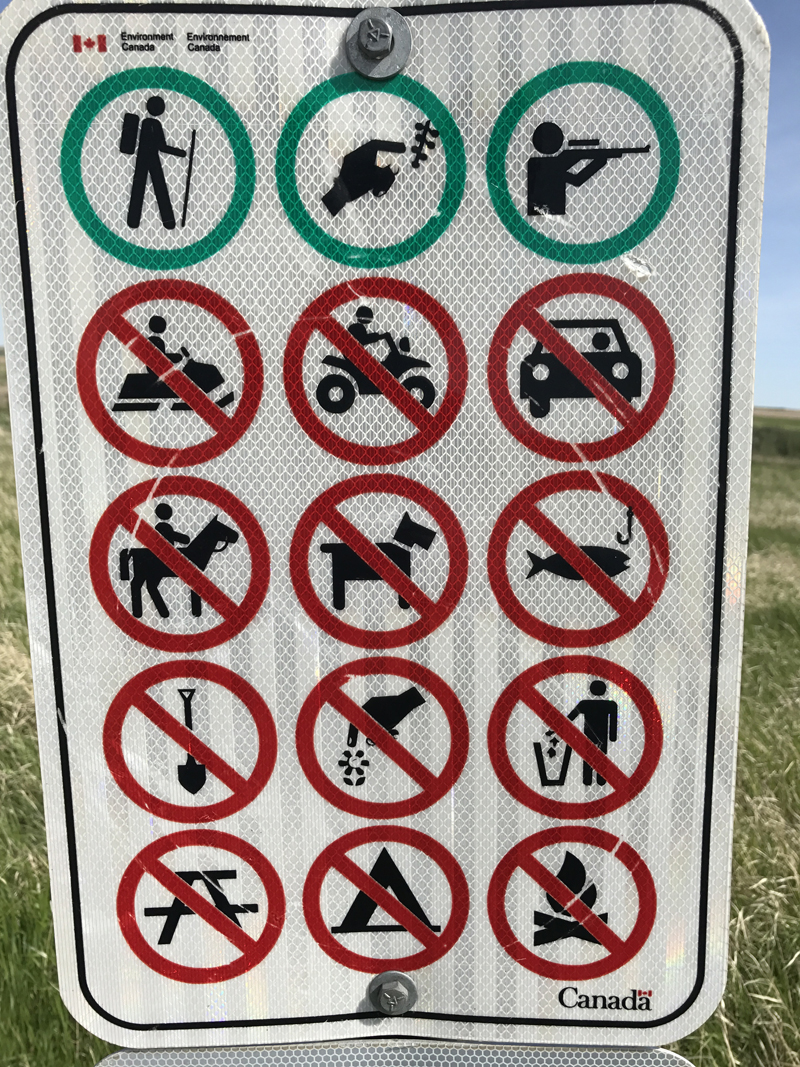 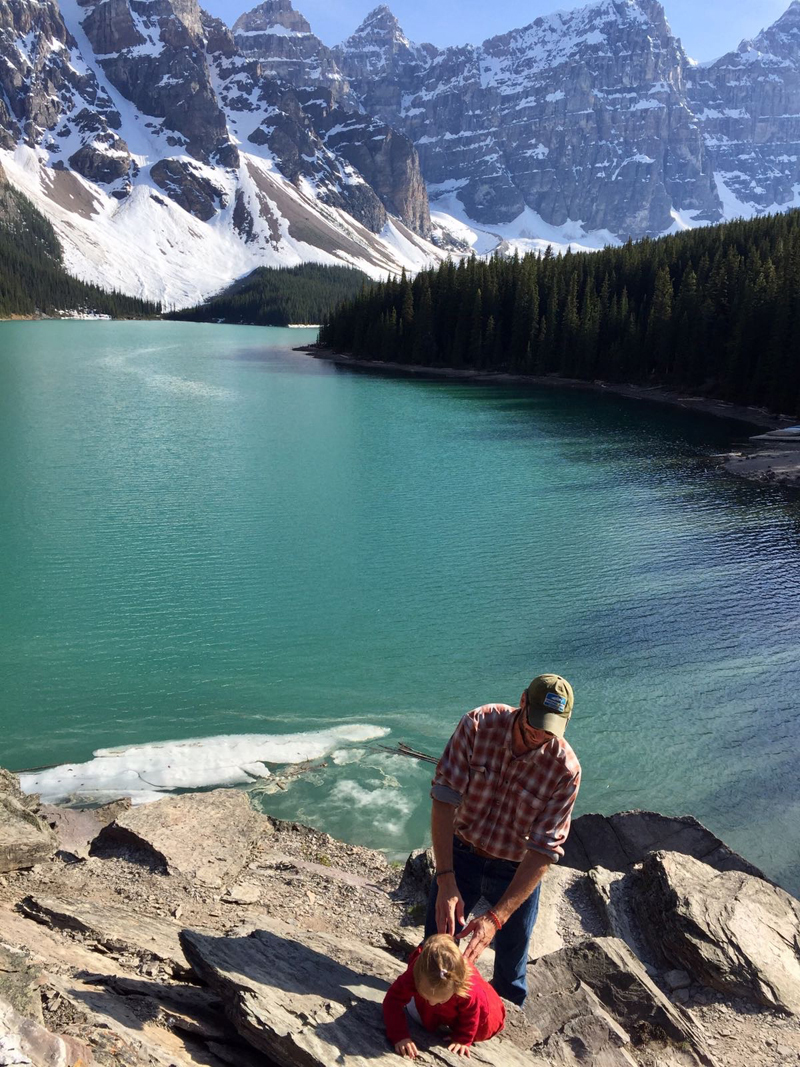 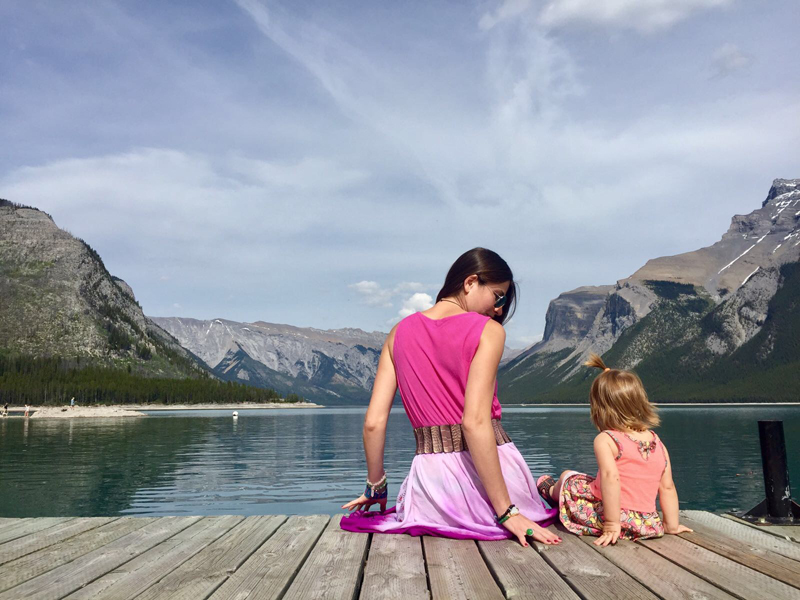 Aya assisting in the selection of flies: 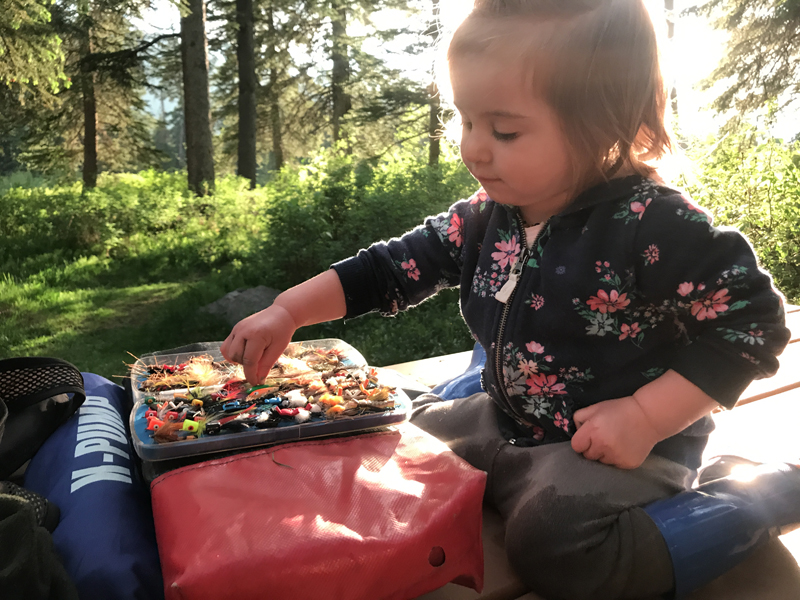 One of the many caribou along the route: 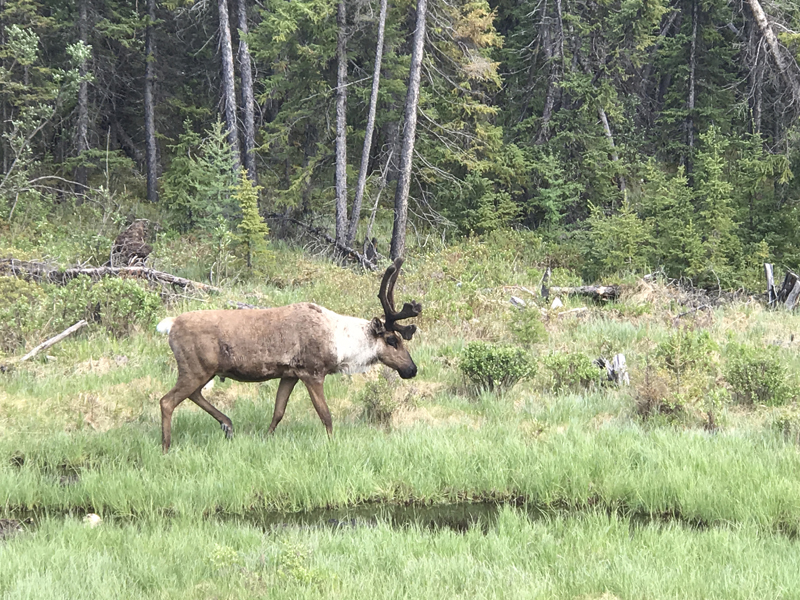 We had bouquets of wildflowers almost every day in the cup holders: 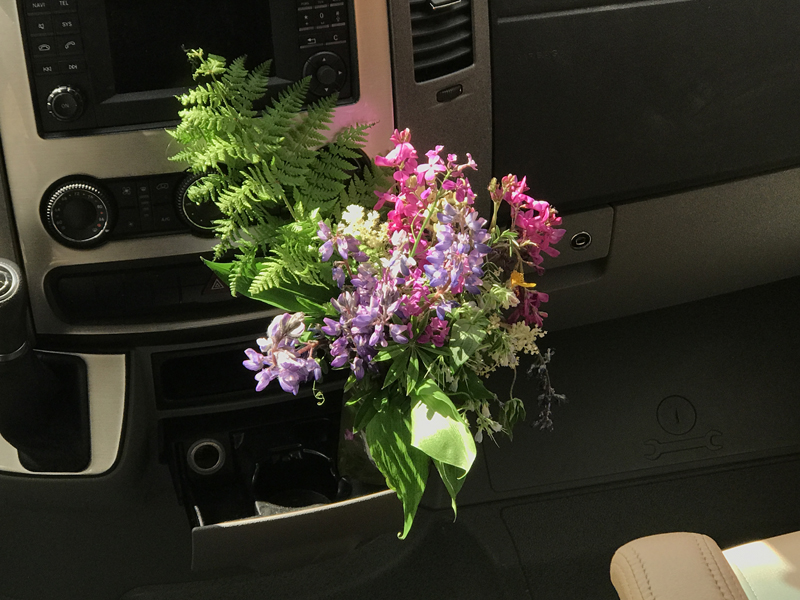 And that's all folks!  We're in Alaska now and will be posting from here soon; in the meantime write us and let us know how you are doing!