Well folks,… the fishing season down here,… has officially ended.   And as is always the case after such an event, the non-fishing season,… has fishily begun.  Yes.  Fishily indeed.  It was a great summer overall, low water notwithstanding.  And from the look of the rain and snowfall surrounding this writer’s current point of view here at the big bay window in Trevelin (I know it’s early, but just in the last 24 hours we’ve had over five inches) things are going to be back to normal levels in no time and we’re likely to have plenty of water for next summer.

Rance and Travis had some photographers down in March and so I showed them around the Tres Valles venue, which turned out to be a lot of fun.  These are good friends of mine, and also the owners of Patagonia River Guides, whose programs at Estancia Tres Valles and in Trevelin, as well as up in the San Martin/Junin de los Andes region all appear in the Patagonia Unlimited catalogue.  Austin Trayser, Matt Jones, Rance Rathie, Guillermina Etchebarne, and Khadizhat and I had a great time of it those days, fishing and rowing and hiking and setting up shot after shot after shot. 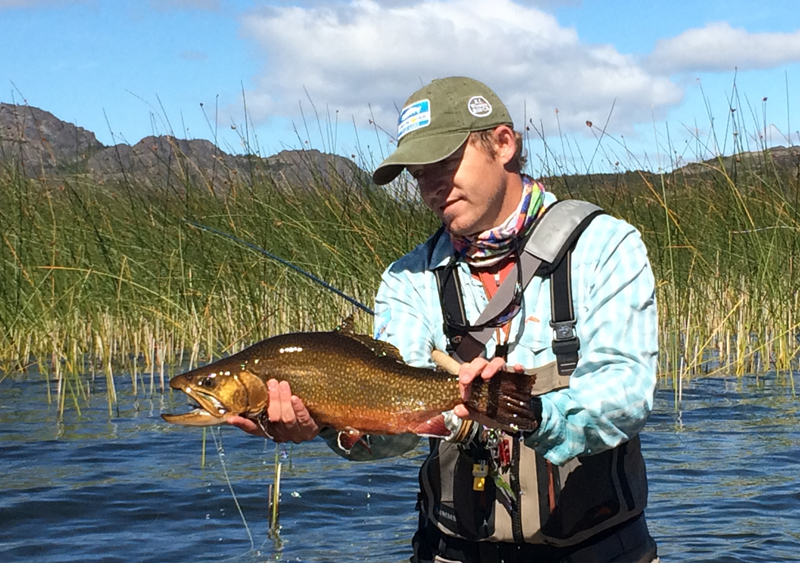 And in the process I even ended up convincing Marcelo Acevedo (one of Rance’s auxiliars and a neighbor of mine from back in the Rio Pico days) of all people that my fishing Icaros actually work.  He had challenged me to try one, in fact, while Rance was nymphing the juncos bank one day as we waited on the lunch truck.  Bright sun, no wind, and no bite happening whatsoever – these were the conditions, that is until the last note of my Icaro – then Wham!  Rod went up and it was on!    Pretty cool really.  “Ahora te creo” Marcello said, “Ahora te creo”. 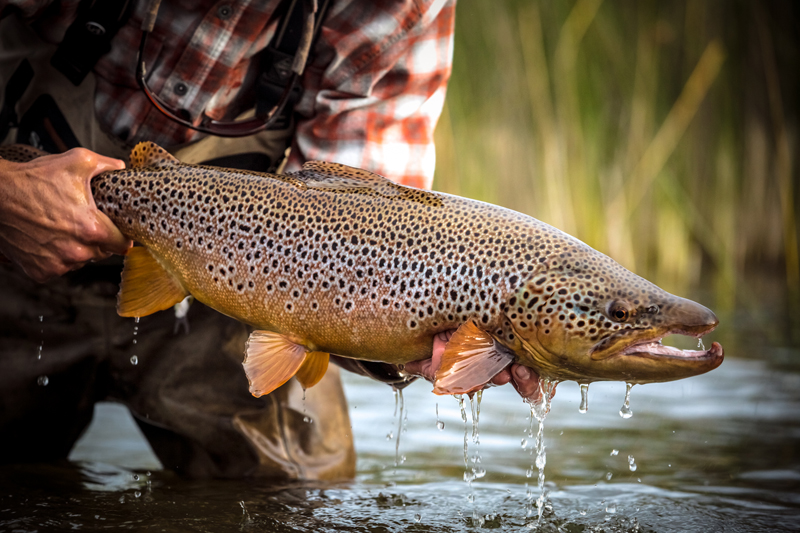 Other highlights of these few days were my own thirty inch brown, pictured here and now also on the homepage slideshow of Rance and Travis’ website, a lot of really good lunches, and a lot of just kind of lying around in the tall grass looking up at clouds while Austin and Matt messed with the cameras getting set up for a shot. 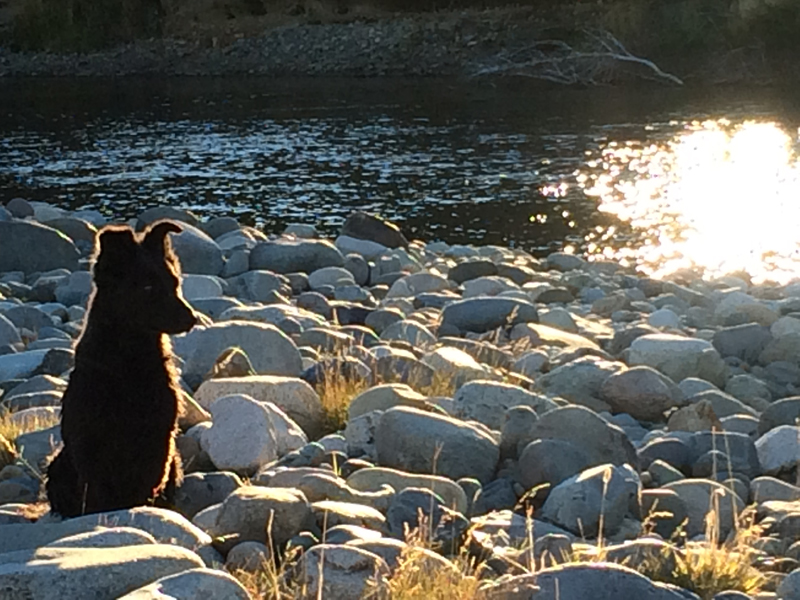 After the shoot we had several more very nice groups, including my last of the season which was really made up more of friends than clients - Matt Branton and his father Allen.  Even Negra got to tag along on this week’s worth of wading, boating, and getting hooked in the face, although she mostly just got tangled in the stripping. 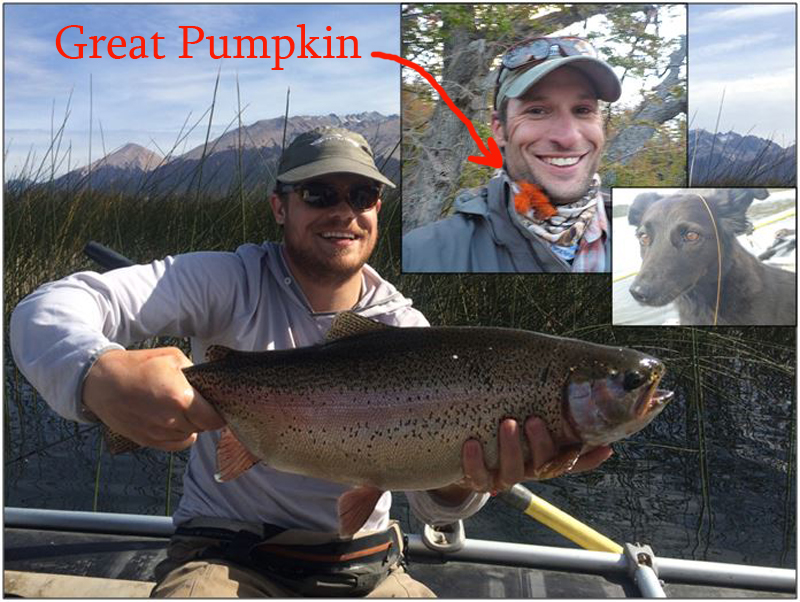 Matti apparently has a thing about my face; at one point while I was netting a big rainbow for him on Lago Tres he spat Copenhagen all the way across it, and at another point down on La Panisa he buried the size #2 hook of his Great Pumpkin (a big orange articulated streamer fly) in it on his back cast.  God Love the guy though, he did keep catching hogs, and even rowed the boat sometimes! 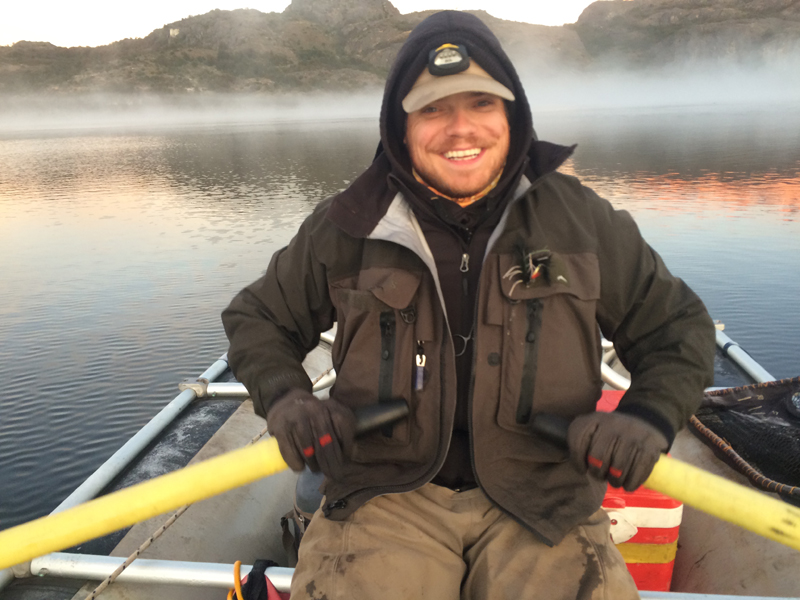 Once it was over though it was over, and I had to accept that the hour had come to shift gears.  Luckily, there were apples.  Lots and lots of apples. When Trevelin was first settled by the Welsh in the 1880’s they brought more than a couple of apple trees.  At that time the farms which were being developed here were all producing wheat, not cattle, and once the mills were constructed the flour being produced in our region even began to win world fairs.  Once the population began to come in off the estancias and center up more in town though, the apple trees just kind of got left out on the old homesteads. 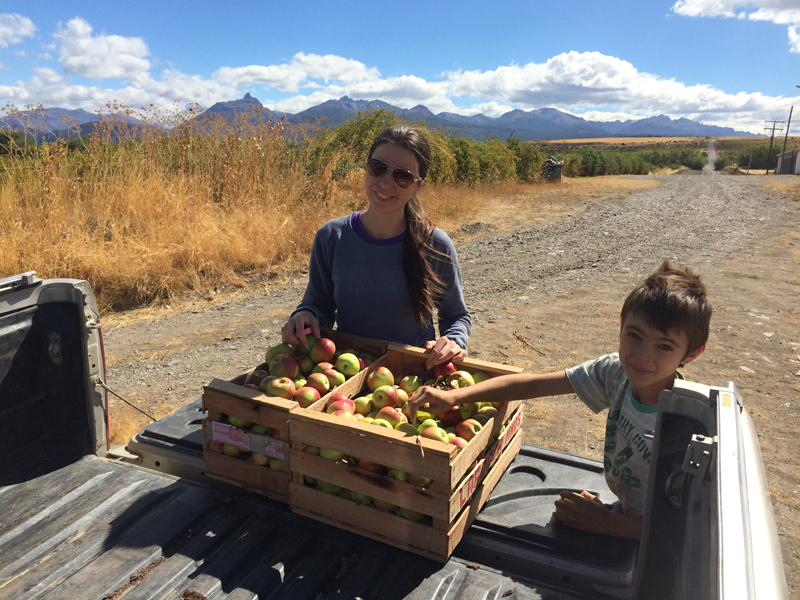 And since those same old homesteads are the kinds of places I usually hunt quail in the fall, I run across these trees quite often.  So Khadizhat and Caetano (a most excellent neighbor from across the way) went out gathering them, and have been eating and cooking and drying and juicing them ever since. 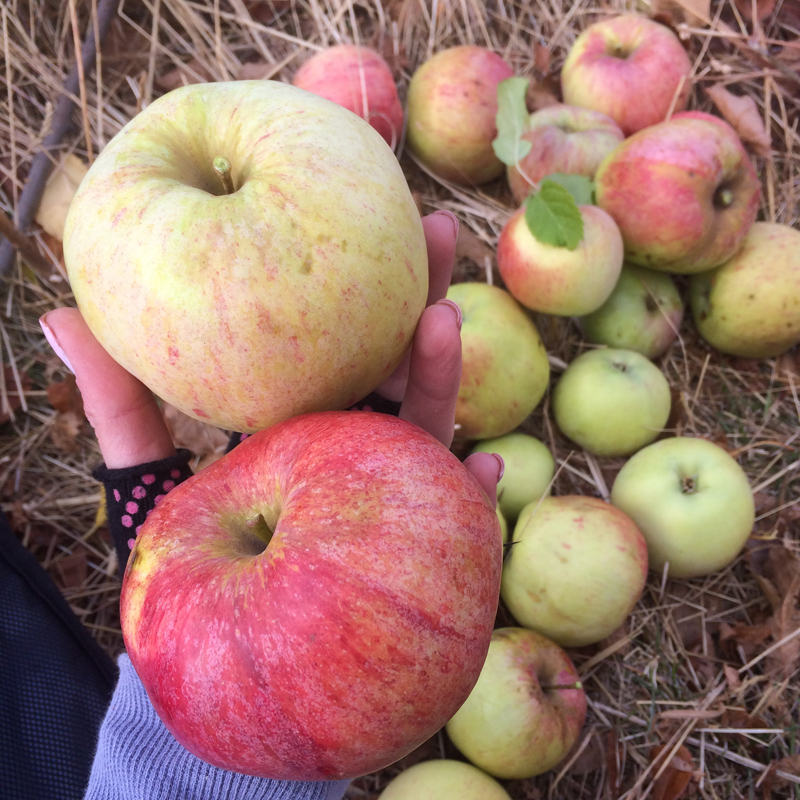 Khadizhat makes pies and cakes, I make apple sauce and cider, and we’ve both been dehydrating and juicing the living Dickens out of them to the point that I honestly wonder if one might not overdose on apple with such practices. 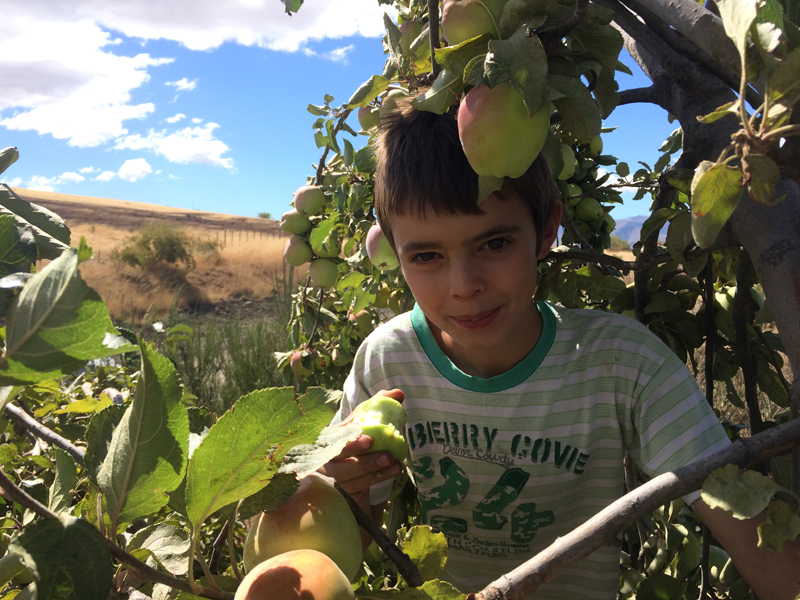 Alas though, the things are apparently healthy, in whatever quantity, and with the stores that now exist here it looks like we’ll be eating them still for a good long while. 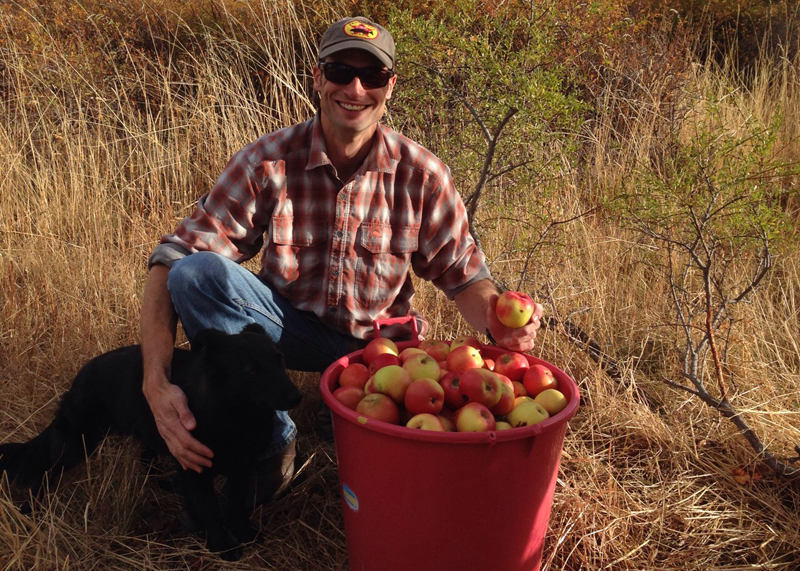 In truth though we’re actually just now getting back to the processing of the harvest that got stashed beneath the stairs, since it got interrupted for a bit with a trip to the Amazon in Peru.  No new country mind you, just some more of the same ol’ same ol’ with our friends up there in the jungle, but this time also a lot more water than we are used to.  The river herself, which off the banks of our usual camp is already a mile and a half wide and normally a hundred and twenty or so feet deep, had come up thirty-plus feet above even her hundred year high-water mark, which totally flooded us out. 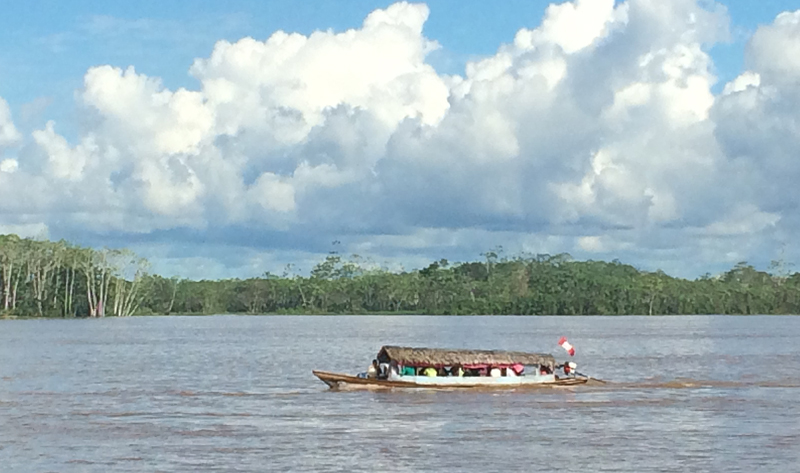 It’s truly hard to explain the scale of this river.  Actually, even for a guy like me who spends more days than not on a river of some sort or another, it is hard to even comprehend the Amazon’s scale, much less explain it.  Just to give it a try though for my North American friends who have never been there, we’re talking about a river that is over ten times the size of the Mississippi. 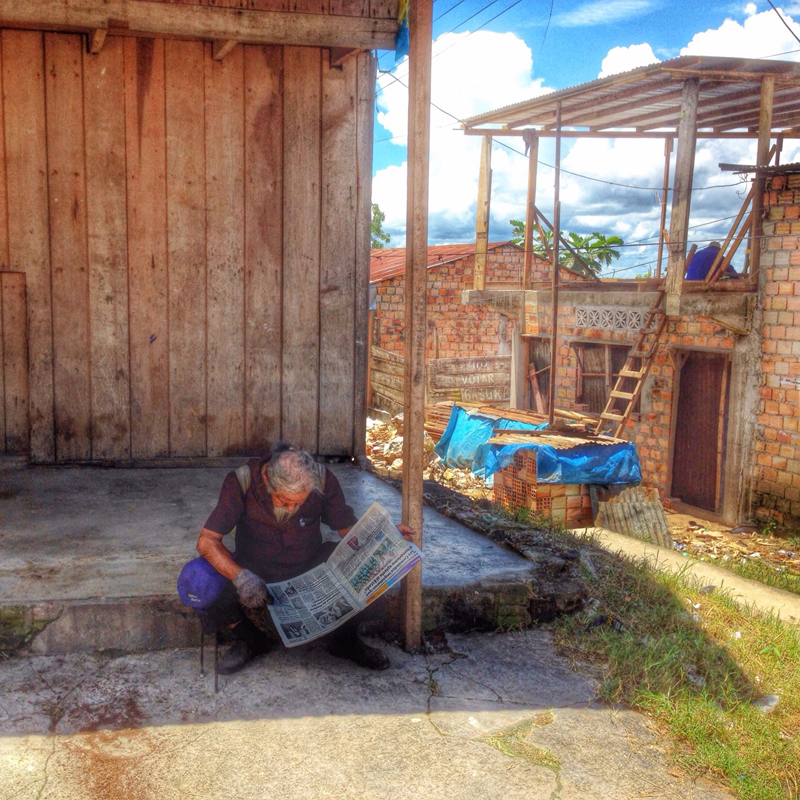 The area of the watershed itself encompasses more than 40% of the continent of South America.  I mean, seriously.  This is a RIVER.  And for folks like myself the fact that it is home to over two thousand five hundred known species of fish, a total greater than that of the entire Atlantic Ocean, is also of significant interest. Some ichthyologists even estimate that the actual total, if we get to know it, will likely be over six thousand. But anyway, I could go on for hours here… 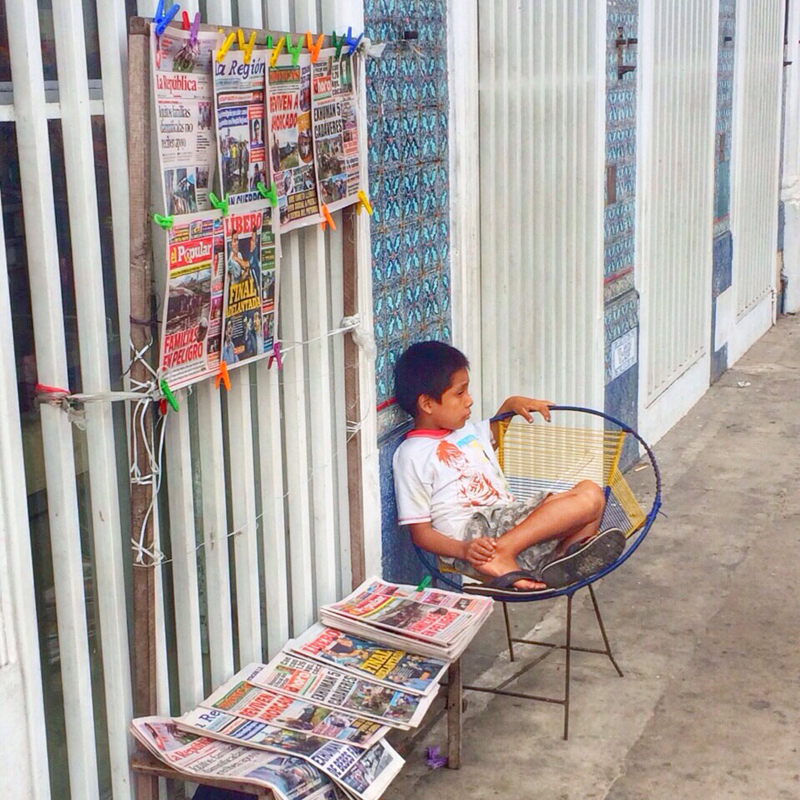 Our usual camp, as I said, was flooded, and so we traveled inland to one of the old camps that I have spent a lot of time at over the years, and in fact even harvested plants from the property herself that we had been watching grow for a very long time. 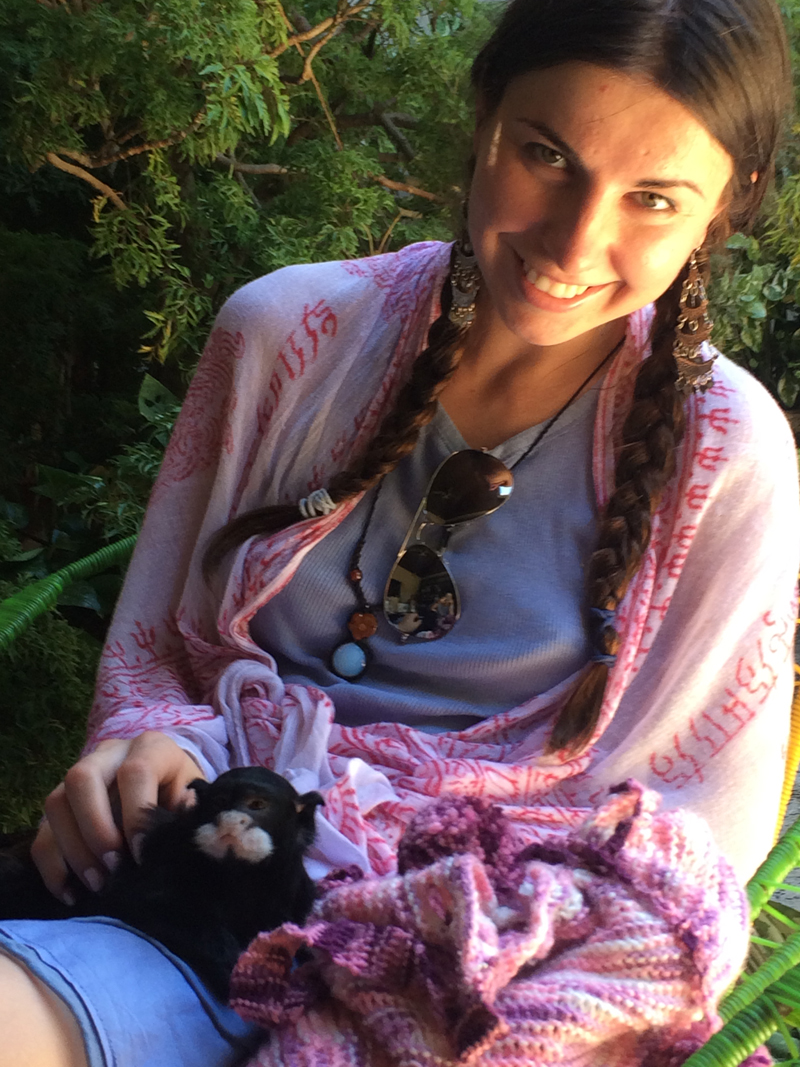 Plus we spent time in Iquitos proper, and took some nice photos as usual of the stray dogs and locals, not to mention my old adopted son Charlie, the monkey of Belen, who Sunay and I bought/adopted last year.  It was a great trip overall though, and now we are back in Trevelin and looking out at the snow capped and rapidly whitening Andes and wondering what happens next.  So in other words the question now,…. 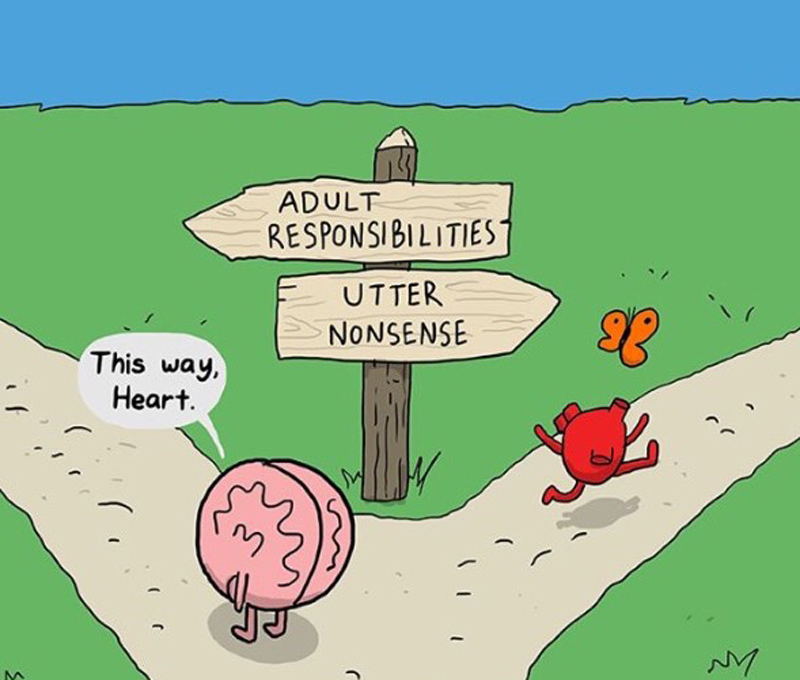