Oh how I do Love the wild places of this Earth!  My time over the summer in Alaska has been divided pretty evenly between work and play, but in this case the line was definitely blurred.  Hemispheres Unlimited is in the process of setting up some new Trout Bum programs here in the far North, and the first one we explored was decidedly a success, soon to be added to the catalog.  Joining me for the exploratory float was my good friend Doctor Frank Rho, a formerly but sometimes still practicing dentist of supposedly Korean descent (although I suspect Hawaiian) who I met in the Peruvian Amazon some years ago and immediately found common ground with in the conversational arena of Fly Fishing. 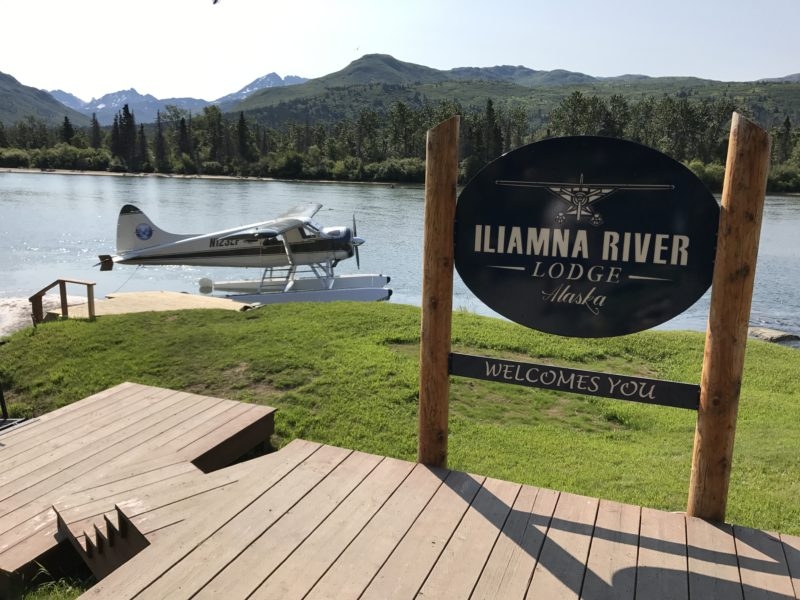 I had set everything up with the outfitter we’ll be partnering with in Iliamna, and Frank flew up and met me in Anchorage for the trip.  We were soon loaded with a boat all of our gear into the cleanest and most well-kept de Havilland Beaver I have ever seen, and then after a spectacular flight through the mountains landing on Hammersly 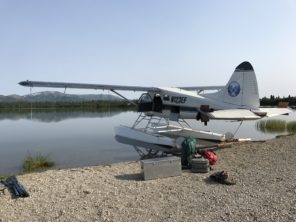 Lake in the middle of Katmai National Park.  Gear was unloaded, lists were checked, and the plane took off, the sudden silence of the wilderness slowly but surely transforming into its new symphony of purely natural soundscape soon thereafter.

We were in no hurry.

The boat got leisurely inflated and the gear packed in place, then we rowed to the outlet of the lake and floated into the first stretch of river. 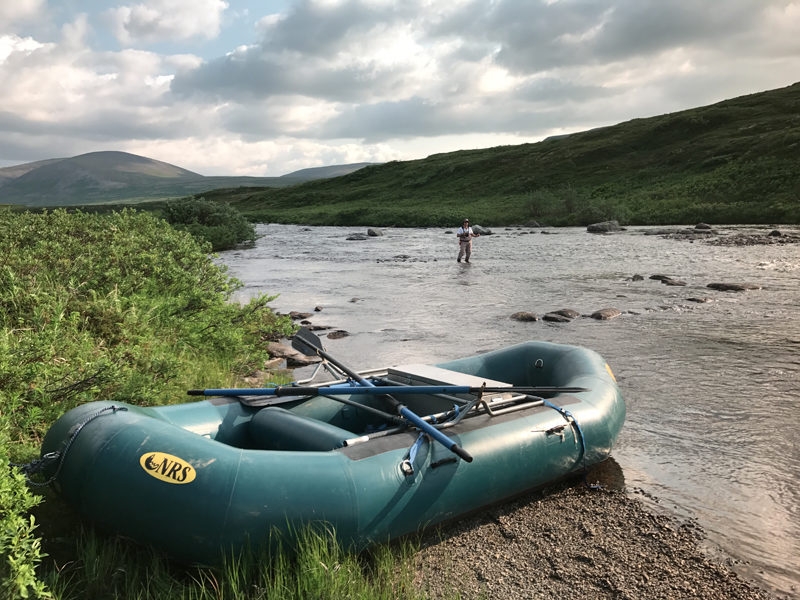 I had been told three things about this drainage which had influenced its selection: that the rainbows supposedly took mice with the same relish Solzhenitsyn’s fellow gulag inmates ate their frozen prehistoric salamanders; that there were supposed to be more brown bears per square mile here than anywhere else on Earth, and that we would see no one along the way. 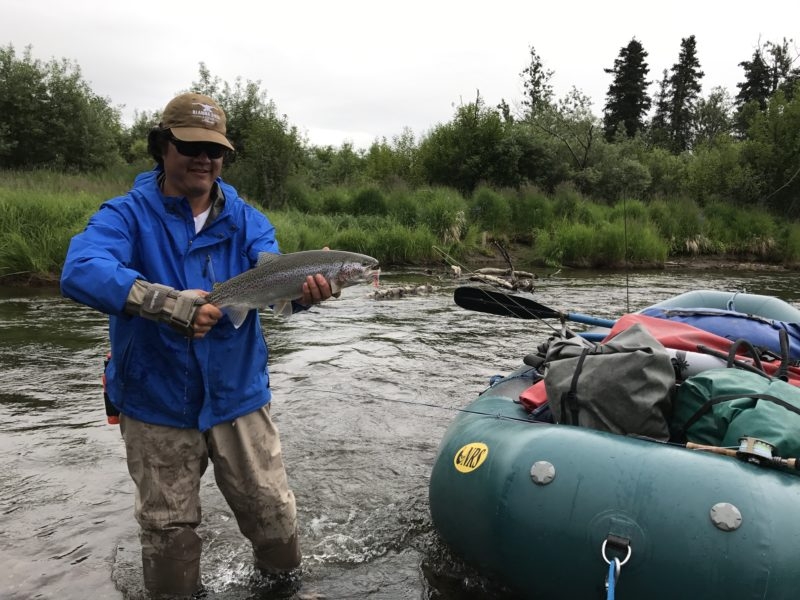 The first fact was confirmed five minutes into the float when my Mr. Hanky disappeared in a surface boil that almost made me think “too soon”.  At least it wasn’t on the very first cast.  Three hours later we were only half a mile down river and unhooking the last of an uncountable number good sized rainbows that had all been caught on this same mouse pattern when the first brown bear made his appearance.  I say “his” because he was close enough to tell the difference; bears have big balls.  He paid us absolutely no attention whatsoever and simply went on about his business, although it wasn’t entirely clear what that business was.  We floated another half mile or so and made camp for the night. 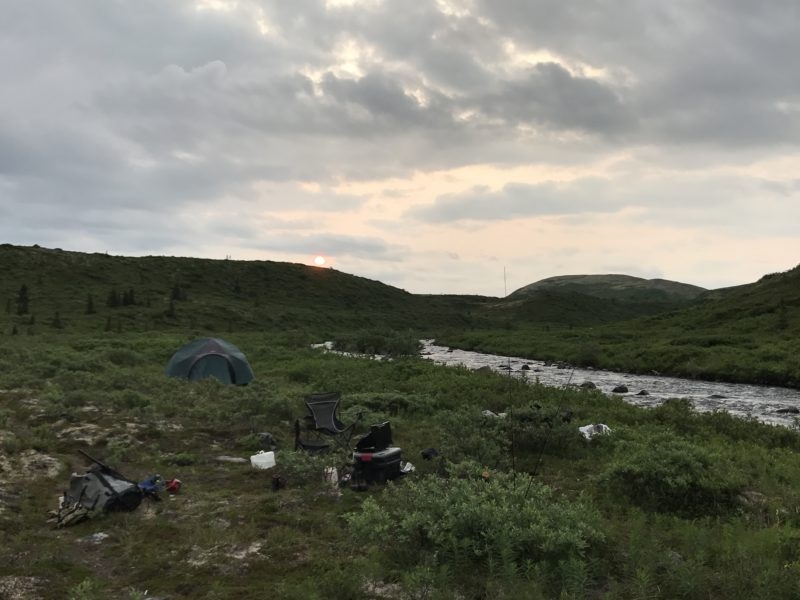 After that the rest of the first third of our forty mile float was more of the same, and perfect in exactly what it was.  The river up top flows through treeless low tundra, is fairly wide and with more than ample structure of exposed rocks, behind pretty much each of which sits a hefty rainbow or two looking up.  The bears continued to make their appearances about every half mile or so, and also continued to ignore us completely, which was nice.  We spent three days and two nights on this stretch, then the last day hit what I will from now on always refer to as the “bottomless pit pool”.  Here was the river’s transition from the high country above into the canyon that lay below. It was a stretch of flat water that was probably eight or nine feet deep, just under a riffle and almost a hundred yards long.  I’d pulled the boat over on river-right halfway down the length of the pool and we walked back up to the drop, my first cast with the mouse bringing a very nice rainbow to hand.  I’d been looking for Dolly’s for three days by then and not finding them, but since this water was so different than that which we’d seen above, I thought now was the chance and switched out to a Dolly Llama, a heavy cone-head rabbit strip fly that was somewhat ironically named for a Tibetan man who has written whole papers on the subject of whether or not catch and release fishing is karmically advisable.  At that point it was only the second fly I’d tied on since stringing the rod three days before, and oddly enough also the second most commonly used fly (after the Mr. Hanky) we threw back when I was guiding in Kamchatka.  This struck me as noteworthy, and at that point I realized that the mouse fishing we had been experiencing had been every bit as good as what I had seen there across the Bering Strait.  In fact, noteworthy doesn’t quite cut it, this was more like, incredible.  Then the Dolly Llama got thumped and I soon brought to hand a fat Arctic Char that was as long as our biggest rainbows but even fatter in the gut.  That’s when things got a little weird. 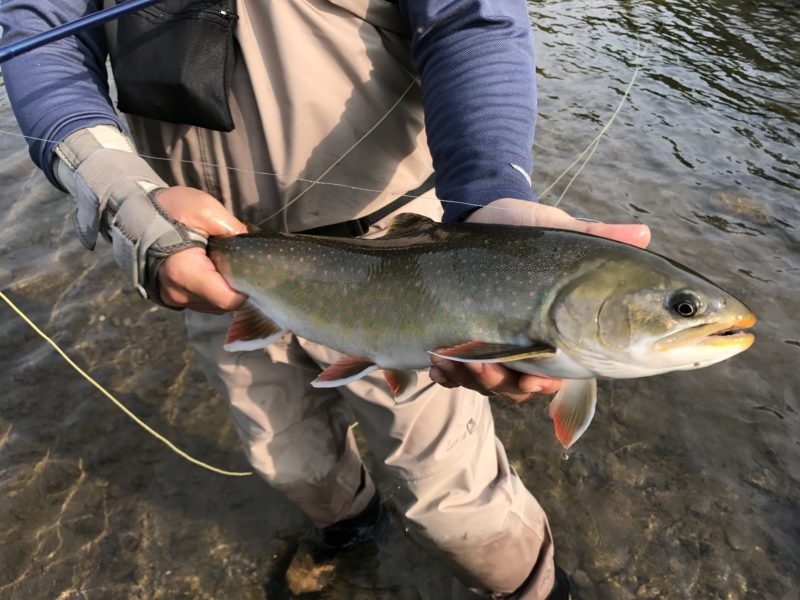 There was a hatch coming off across the whole length of the pool and fish were rising almost constantly all the way up and down it.  We continued at first with Frank throwing his mouse and me throwing my streamer and both caught half a dozen fish as we worked our way down to the tail.  The hatch and rises continued though, and I decided to conduct an experiment.  The bugs were mostly caddis of two different colors and sizes, and I re-rigged to a long light leader and a dry.  Rejection.  Frank put on a nymph underneath a huge Gypsy King he thought he was using then mostly as an indicator and continued to catch fish (on both flies).  I changed up.  Rejection.  I changed up again.  Nothing.  All the while Frank kept catching fish.  Hmmm….

At that point I decided to get serious and went back into my bag for the big box of little bitty dries, the one I never open and always wonder why I even carry.  The flies I spent countless hours tying two decades ago when I was into such things.  Those flies.  Digging deep into the recesses of my brain and the years when I first started trying to match hatches over selective rising fish, I then caught a couple of the caddis with my hands and examined them closely.  One was green, about a size 12, and the other was brown and a bit smaller – #14 I decided.  Going through all the flies I found a good imitation of the larger but still quite small green caddis which I only had two of and tied it on to a further lengthened 5x tippet, then ever so delicately presented it to the far bank at the head of the pool.  Success!  The biggest rainbow we’d seen yet sipped the thing down like wine at a snooty French restaurant.  I then proceeded to work on matching one of the species of mayfly (this had become fun). 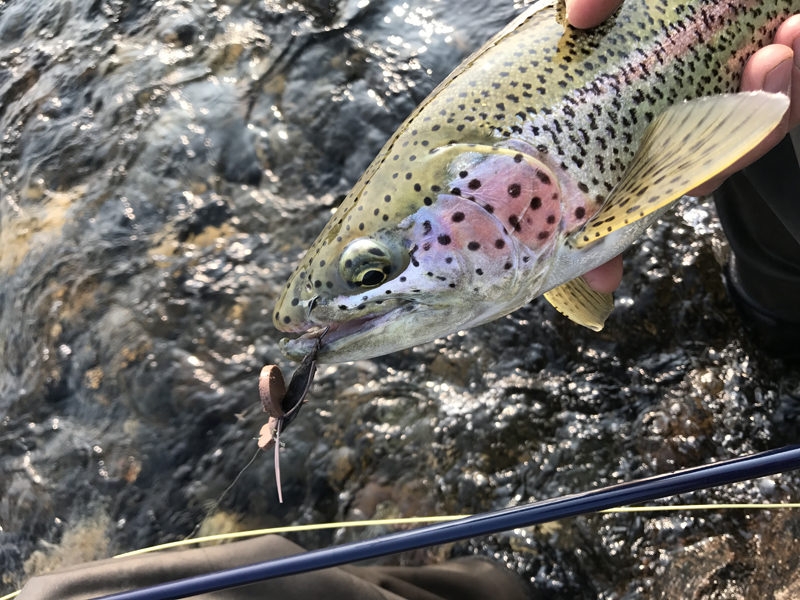 And then it went on,… and on.  We caught fish on the dries that matched the hatch.  We caught fish on every single nymph we threw.  We caught fish on all the streamers.  We caught fish on the mice.  A dozen times I thought we had to have stuck every fish in that pool but they just kept coming, rising, biting.  It was endless!  And eventually, it was too much.  We had been there for probably four hours and the fish just never quit.  The hatch was still hatching.  The risers were still rising.  And we just had to say “enough” and get back in the boat and float on.  I still can’t quite believe it even from here. 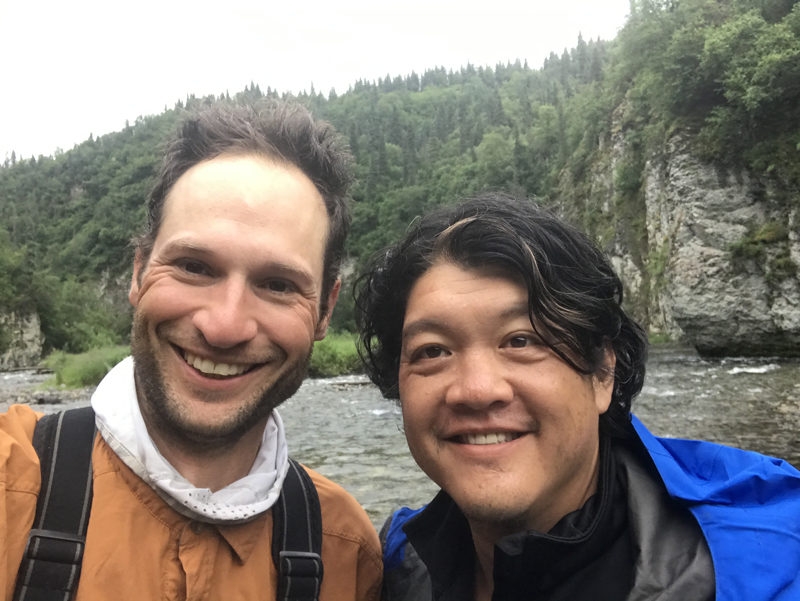 This moment started the canyon stretch of the river, with a much steeper gradient and a lot whiter water.  The walls of the canyon were spotted with the first trees we had seen since our flight in, and the rapids got pretty serious pretty fast.  Halfway down we hit the first class IV and I’d say it was probably every bit of that at normal water levels but maybe even a skosh worse with the water low, since she was a decidedly toothy lass.  We made it through though, and we made it through all the rest of them as well, popping out down below and setting up camp after having pulled over in a few spots to throw a line here and there and finding mostly smaller rainbows than we had been getting up above, which didn’t surprise me.  It also wouldn’t surprise me if there were a few very large fish in there that exclusively eat members of their own kind, but I didn’t catch them.  This time.  Next summer when I come through here again I’ll have a 12” spade-head juggler ready on a ten weight. 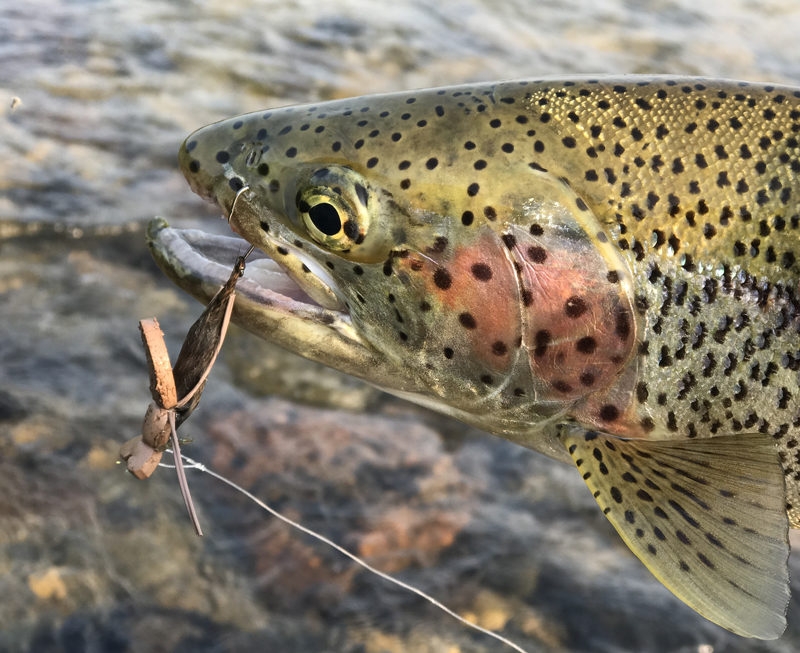 The river still kept dropping fast for quite a while, losing almost a thousand feet in ten miles even in the stretch between the two canyons, and for the most part the rainbows stayed small here.  After the second canyon though we found the first wave of sockeye coming up, and to my surprise they took egg patterns quite well.  We watched fish after fish turn out of the schools and eat them, never snagging a single one even by accident, and so from that day on we ate sashimi with soy, wasabi, and ginger twice a day, going through half a salmon a piece each time.  A few days into that pattern Frank commented that we had to have eaten at least a thousand dollars’ worth of the freshest sashimi he’d ever had in his life, and I am sure he was right. 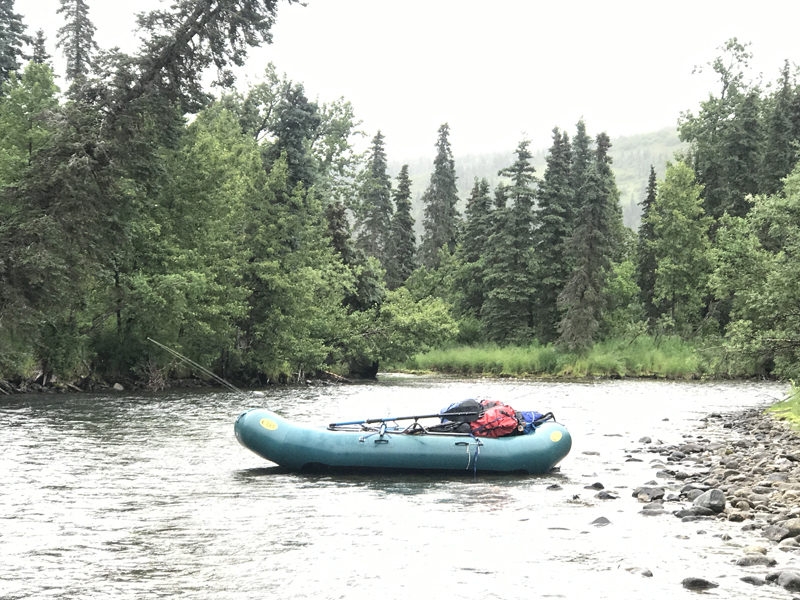 The third stretch of river after the canyons is heavily forested and with less gradient and exactly the kind of holding water and braids that give big rainbows what they need.  The mice still worked, and so did the streamers, and the fish were everywhere we expected them to be plus some places we didn’t.  Plenty of Dollies too, and the salmon by that time had become simply an obstacle to our casts.  That is, until lunchtime each day.

The bears of course continued to make their regular appearances and luckily also to ignore us. All of them except one, that is.  He followed me back to camp one evening as I brought the sockeye in for our dinner, then circled us several times at ever decreasing radius’s of distance.  Eventually I talked him out of it, and into heading off to fish on his own.  But watching them all throughout the float had been just fascinating.  We saw mothers with cubs, big solitary males, players, fighters, and growlers; even an adult that was watching the fish from a ten foot high cut bank who suddenly dove, head-first into the water, disappearing completely underneath the surface then coming back up with a salmon in his mouth to climb the bank.  We actually gave that one a standing applause. 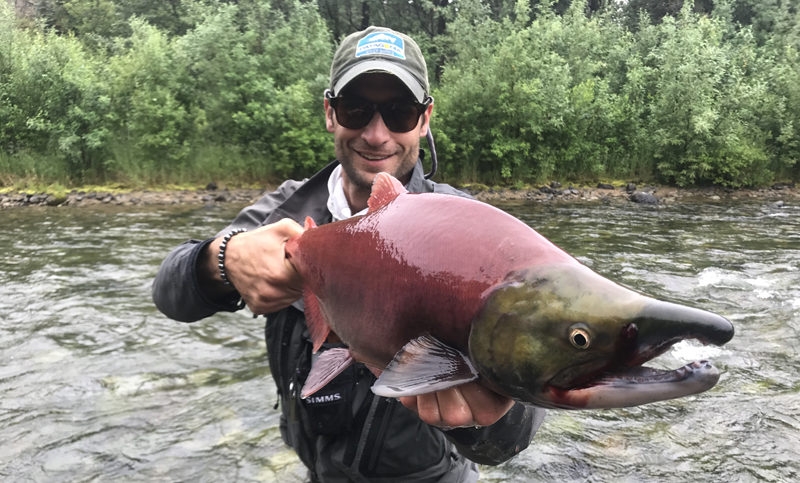 Nearing the lower lake the forest distances itself somewhat from the river and the banks become soft.  We caught fish all the way to the takeout and I can only say that when the Beaver reappeared and landed on the water, we were ready.  It could not not have been enough.  Not for anybody. 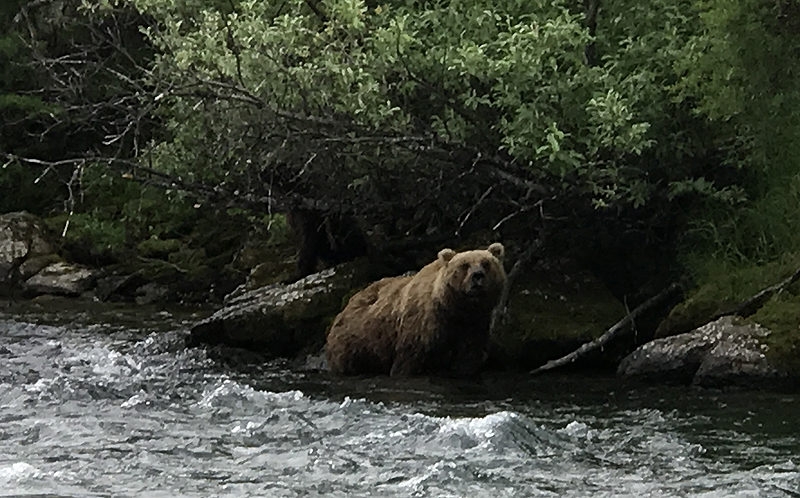