I ended up heading north after the last update despite my concerns about the heat, and in the end that turned out well. The first place of real interest that I hit was the city of Esquel, a really cool town of about 30,000 people that have great style. I spent only one night there, 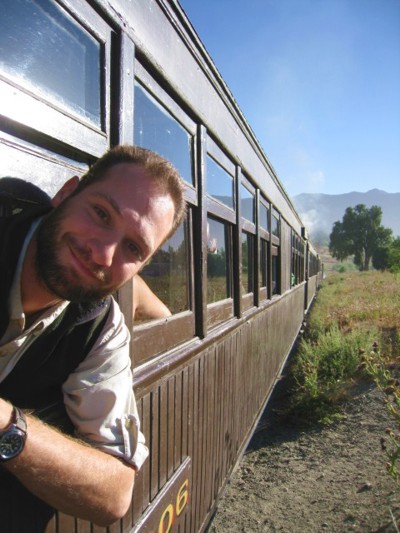 but used one of my days to ride an antique steam train known as "La Trucha" up to a Mapuche reservation settlement that sits outside of the city. There was a museum there and a lot of native vendors of little trinkets and overall it was pretty neat. From there I made my way west towards the Chilean border and into Parque National Los Alerces. Alerces are sort of like our North American Redwoods, really long living conifers of immense girth and stature. Upon arrival I set up my camp on the Rio Desaguadero where it meets Lago Futalaufquen. 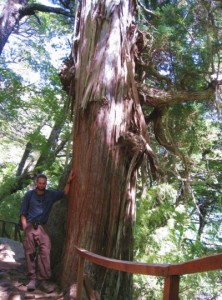 It was a public camping area and in the tent next to mine were my soon to be good friend Don Diego and his grandmother. I call him Don Diego because I like to (he calls me Don Justin in return), but his name is really just plain Diego. Diego is nine years old and lives in an Argentine city far to the north of here called Santiago del Estero.  He lost his father to cancer three years ago, lives with his mother and two brothers, and is currently on this vacation to the South with his grandmother, Marta. We got to know each other a bit by hiking to a nearby cave with Tehuelche paintings and then climbing one of the small mountains that surround the lake. Don Diego seemed extraordinarily 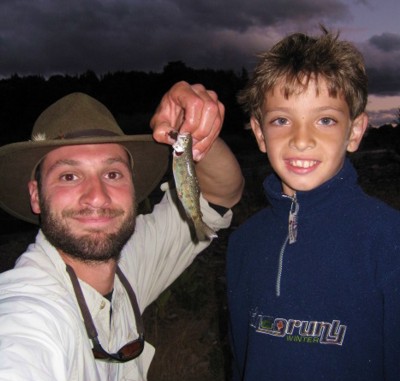 interested in my fishing equipment so when I got around to putting it together in the evening to see about getting some dinner out of the river I brought him along. Usually you don't just take a kid out who has never been fishing before and put a fly rod in his hands and expect him to catch fish, but Don Diego made a careful study of what I was doing for the first hour 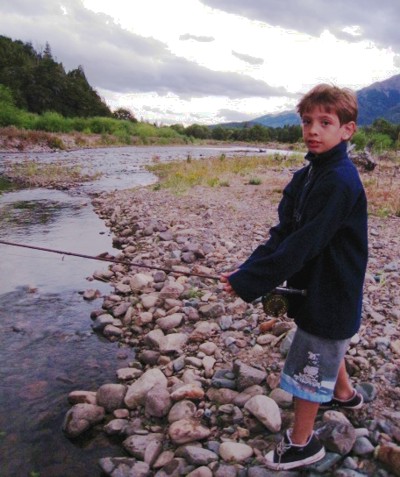 and then did exactly that. Not only did he catch his first fish (and trout on flies at that), but he was pretty competently handling about thirty feet of line and a dry fly before it got dark; on an 8-weight rod! What fun. We took enough of the smaller trout back to feed the lot of us and cooked them up with butter and lemons that I had carried from Esquel. The next day we spent hiking up the West side of the lake and skipping rocks, and then it was time for Diego and Marta to go home, which made me much sadder than I had expected it to. That night I was outside the tent doing a bit of thinking when I noticed the light beginning to change. The moon had been full, but when I looked at it I noticed a small "indentation" 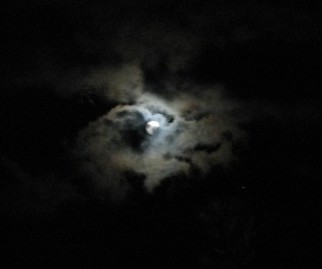 that seemed to be forming in the lower right hand portion of it. "It couldn't be", I thought.  But as I stared up at it the indentation began to grow and soon it had consumed almost a quarter of the bright white moon that had been there. The whole eclipse took well over an hour I think, but I saw every second of it from the front door of my tent. And then it was just gone. A bright, mostly clear, full moon night had gone as dark as the inside of a mine, leaving this odd looking whole in the sky. Then the moon slowly came back, starting with the opposite side until it was full once again. In all my life, even with the news hype and general chatter that usually surrounds these events up home, I have never actually seen an eclipse. There were always clouds in the way, or it was only a partial eclipse anyway and really late - so why bother, or something. And then to just notice one like this down here; Que Raro! 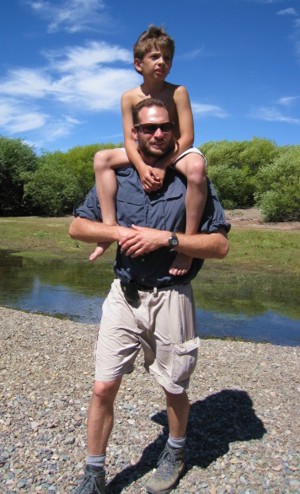 After that I headed north again through the park, ending up at Puerto Chucao, where there is a suspension bridge over a river that is absolutely full of 24" and better rainbows finning in the crystal clear water. I wasn't after rainbows though, I was after Alerces, so I hopped on the ferry and made my way north further still to Alerzal, where a two mile hike brought me within feet of trees that have been standing where they are now since six hundred years before Christ was born. It is a humbling thing to stand in front of these trees and think about time, about your life, and about relativity in general. Incredible. And this whole enormous area on the north end of the park is completely protected from humankind other than the ferry passage and this one trail. Some of the best looking country I have ever seen. 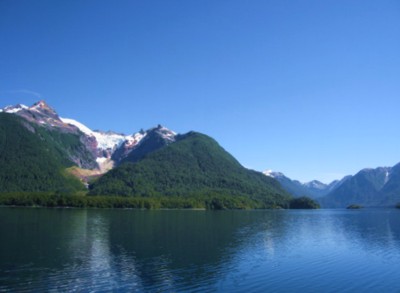