December 25, 2013
A Snowy Christmas in the Austral Summer
by 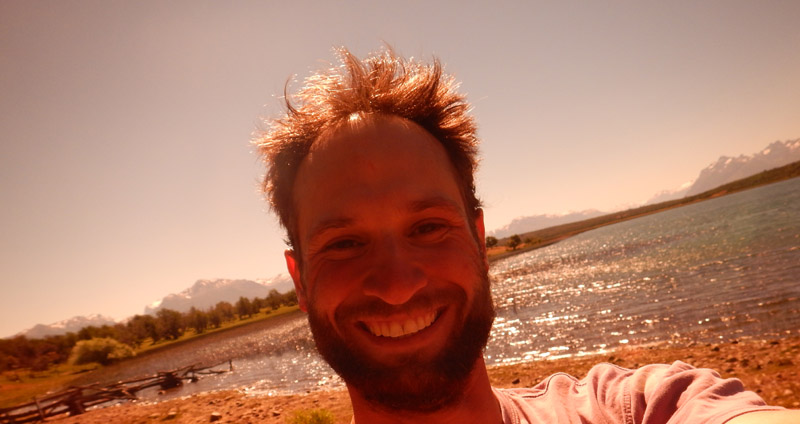 Happy Holidays Everyone!  As I write this I am sitting in the altillo here at home in Patagonia, with the sound of the centrifugal honey extractor humming up from down below where that lovely substance is being spun from its combs for safe packing into jars; while the snow, yes I said snow, falls on the mountains outside my big bay windows to the West.  I am going to miss this place.  A lot.  But as a famous writer once said, “Everything moves and changes, and no two days are ever the same for a fly fisherman.”  And so, I am winding down a shorter than normal season here and getting ready to head north, then farther north, into a year that will see me guiding at one point or another in every single hemisphere on Earth.  Such is the way things move and change these days.  On that note – my house in Trevelin is currently for sale.  Don’t everyone panic all at once; I am certainly not closing up shop here in Patagonia. It’s just that with my upcoming cycle of work between Argentina and the Bahamas, the Peruvian Amazon and Siberian Russia, it just doesn’t make sense at the moment to let the place sit here un-used.  Like I said in my last post, operations will continue as normal while I’m gone, as well as when I am back in between other locations, but in the meantime the house has to be let go.  Anyone interested or who thinks they might know someone who will be interested can click here to see details.  In the meantime, when it sells, all of my stuff will be stored with friends here in the area, and I’ll still have a more than adequate base of operations down at the lodge in Rio Pico until I find something else I want to buy.

It’s been a busy season so far (hence the long time no update) and both the weather and the fishing have been excellent.  Hernan and I did a couple of dot-connecting excursions down to Rio Pico last month where we enjoyed catching on both the Spey rigs and the dry 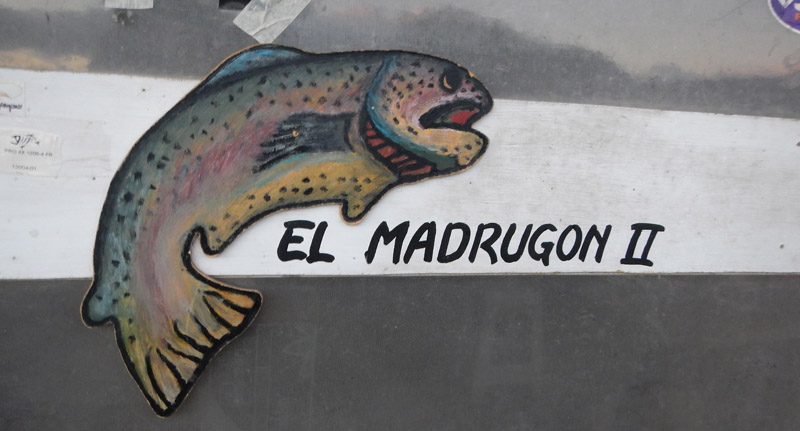 fly throwers, spending a few nights as always beneath the bridge at the Corcovado Boca with Don Arias and the gang.  This is always such a wonderful experience, and one I wish I could share with more people than I do.  The folks that congregate beneath that bridge for the opening and closing of each season are some of the most knowledgeable, and nicest 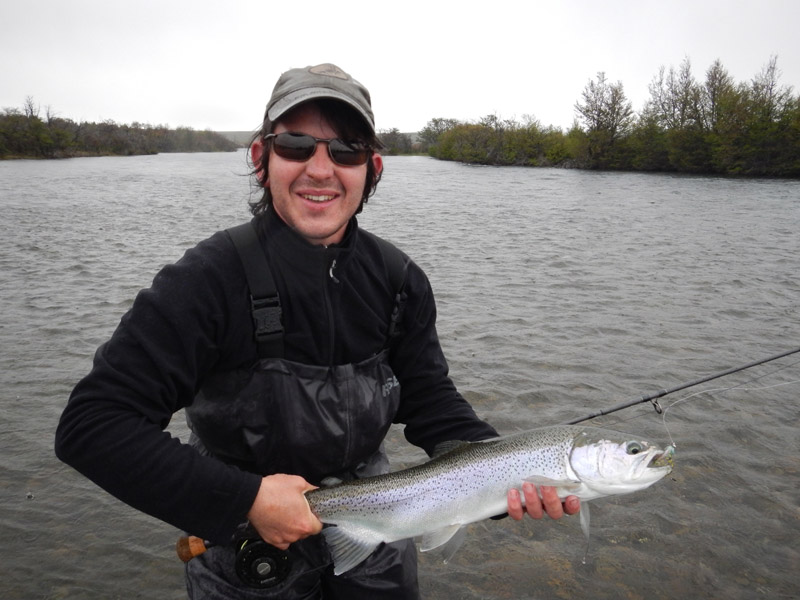 in all of Patagonia.  I don’t think a thousand dinners with them would be sufficient to hear all the stories that might get told, or to learn all of the useful tricks that might be learned.  The time was cut a bit short this year though due to a re-paving project that the province had (in my opinion) rather poorly timed, which caused the Madrugon II to be disassembled and 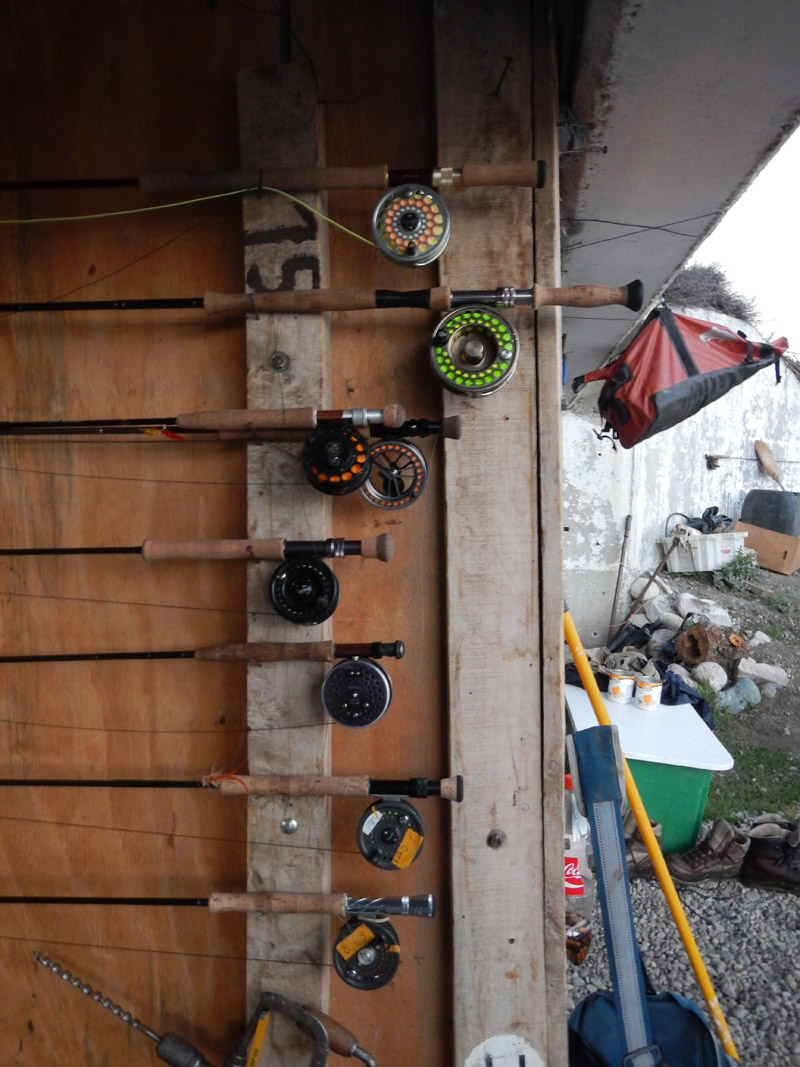 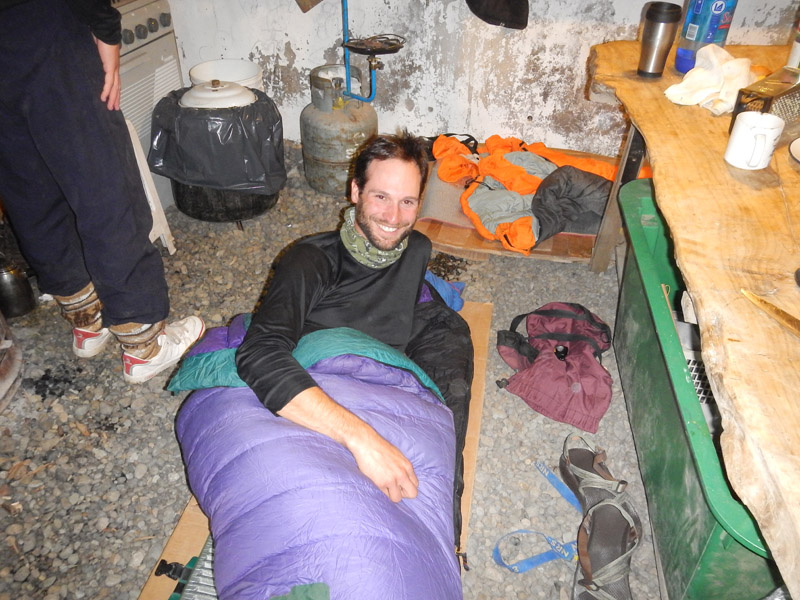 hauled back to Rio Pico after the first week of the season.  But no worries, April will be here soon enough, and Maestros Paulino, Raul, and Pedro will be there to serve, as always.  But in the meantime Hernan and I went to check out something we had noticed a long time ago and never been able to explorei Chile – the Arroyo M. Malal.  This thing just sort of screamed to have hoppers

thrown into it, and the throwing of them was exactly our intention as we anxiously parked beneath a clear blue sky that afternoon and rigged our rods.  No sooner had we done so though, when Hernan said “Che, Justin, has viste ese letrero?”  I could hardly believe my

eyes.  We had parked right next to a sign which read, in no uncertain terms, “No Fishing”.  Arghhh!!!  I grabbed my regulations and looked up the creek.  Sure enough – closed.  But why???  Only thing we could figure was that it was an important spawning ground for the 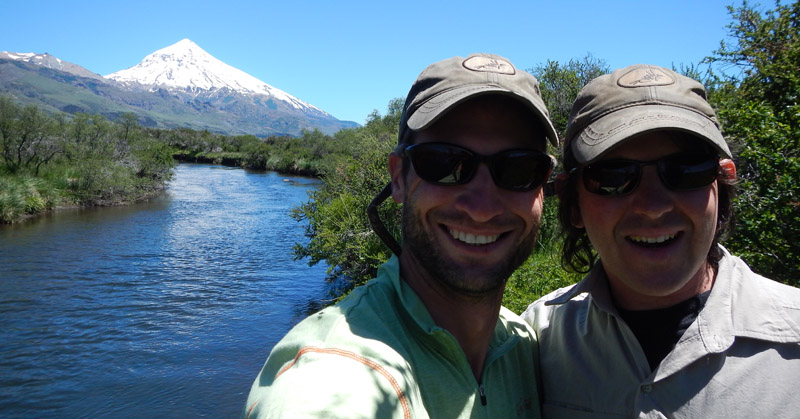 fish of the nearby river into which it flowed.  So – licensed guides and law abiding citizens that we are, we took down the rods and pulled out the cameras for a walk. Sure enough the thing was chock full of beautiful trout, some of which we even managed to photograph, but a fishing we did not get to go.  Instead though at least there were the hot springs.

Another interesting note from this particular trip across the Andes was that it was Hernan’s first into the “interior” of Chile, and the roads made quite an impression on him.  I mean, they’re paved!  And not full of potholes!   Plus there is the embarrassing question of the cow crossing signage.  You see, in Argentina we have this sign: 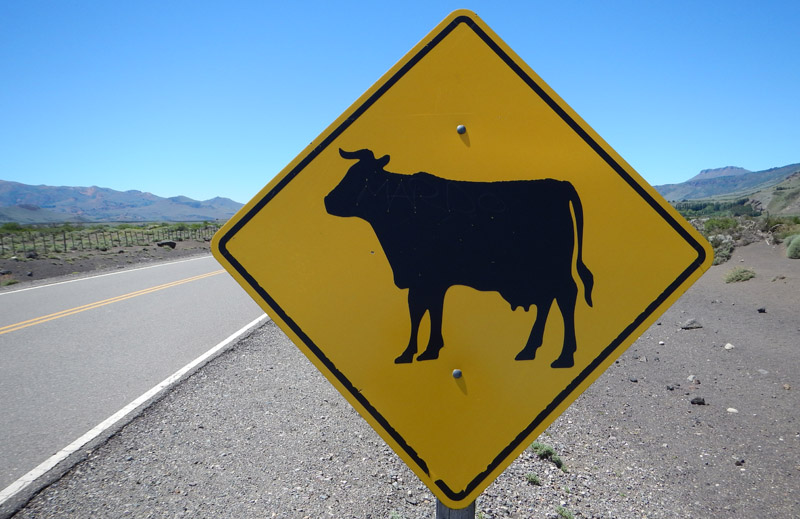 that of a cow, crossing.  In Chile, on the other hand, they go full-bull: 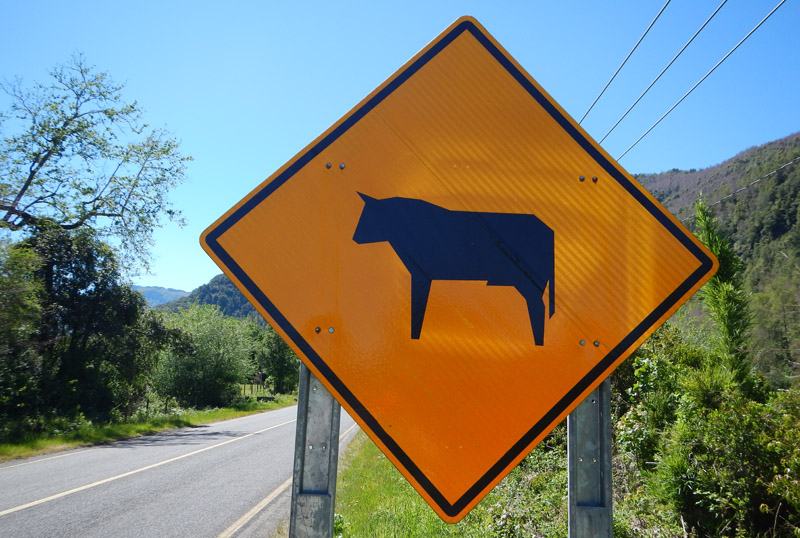 Whether this is simply an issue of greater impact iconography to make drivers even more cautious than they might otherwise be, or some sort of pseudo-Freudian complex about terminology differences between the two cultures along the lines of “Pico” vs. “Pito”, I don’t know, but Hernan was laughing pretty hard, so we took pictures.

Back in Rio Pico it was client/fishing time again, and we enjoyed some wonderful weeks on the water with folks who had come down to do just that.  I was a bit surprised at how low some of our streams and rivers have fallen already, considering the excellent snow pack the area had this last winter, but the fishing was spectacular, as usual, all the same. 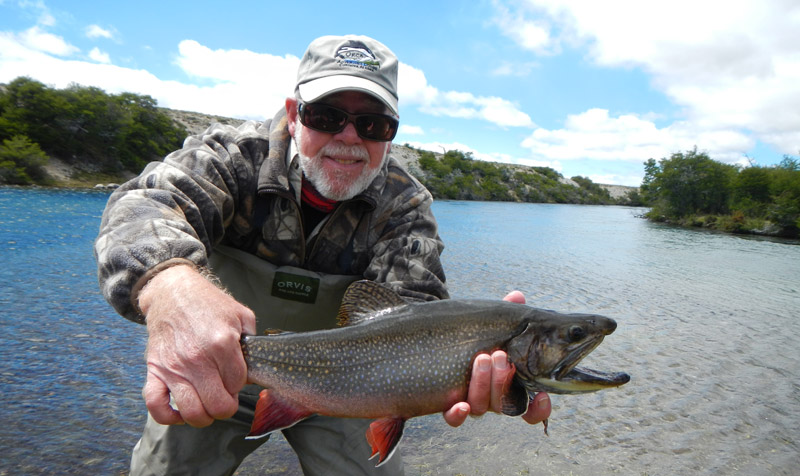 Of special note was a visit by one of my favorite clients, Mr. David Capen, who this year took advantage of both our Rio Pico Lodge package and a portion of the Trout Bum package, following Hernan and I with packs into one of the back-country drainages we love

so dearly in order to make camp and fish for trout that have most likely never seen a fly, as well as enjoying the campfire and natural surroundings of a puma-tracked and little accessed area of Patagonia he had not before been familiar with.  As usual, the fishing 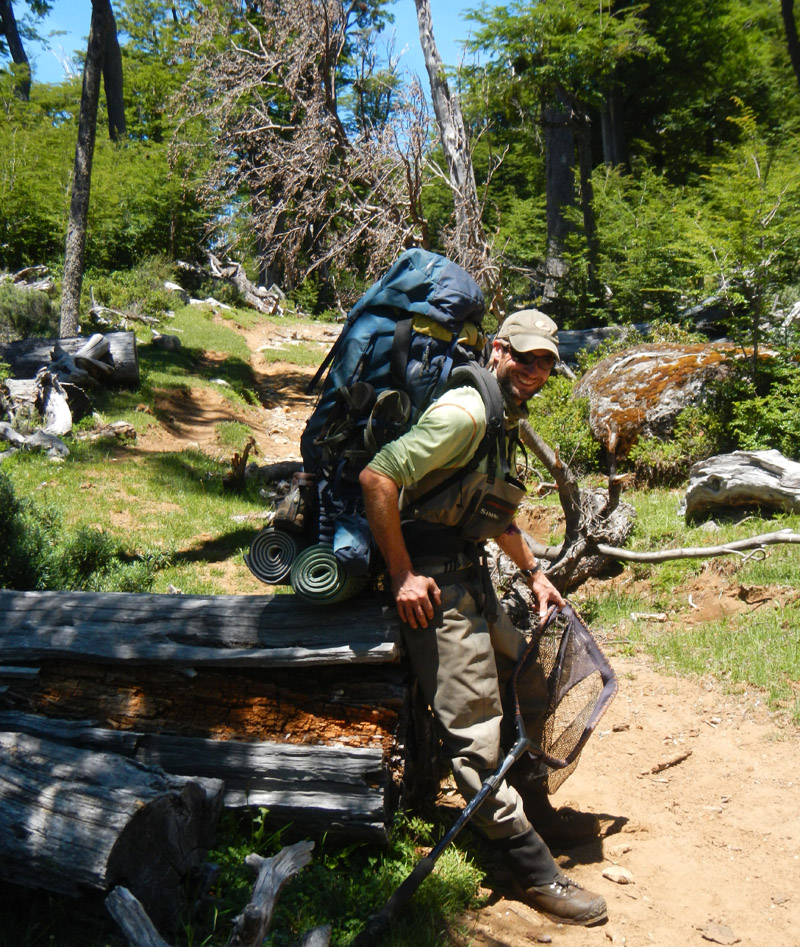 was great.  And now with the new snowfall I am watching and the rain which is forecast to follow, I am certain the coming weeks will be more than superb as well.  There is definitely better moisture in general though this year, as noted with the year’s crop of Llao llao, an

orange tree dwelling mushroom which is sweet to the taste and a delicious treat while we are out on the streams.

Taking a quick break before my next group comes in though I just got back from the annual “scenalada”, or marking/castrating of the lambs, out at my good friend Marcelo’s place on Lago Rosario just down the road.  A bittersweet if also delectable affair as always, we got 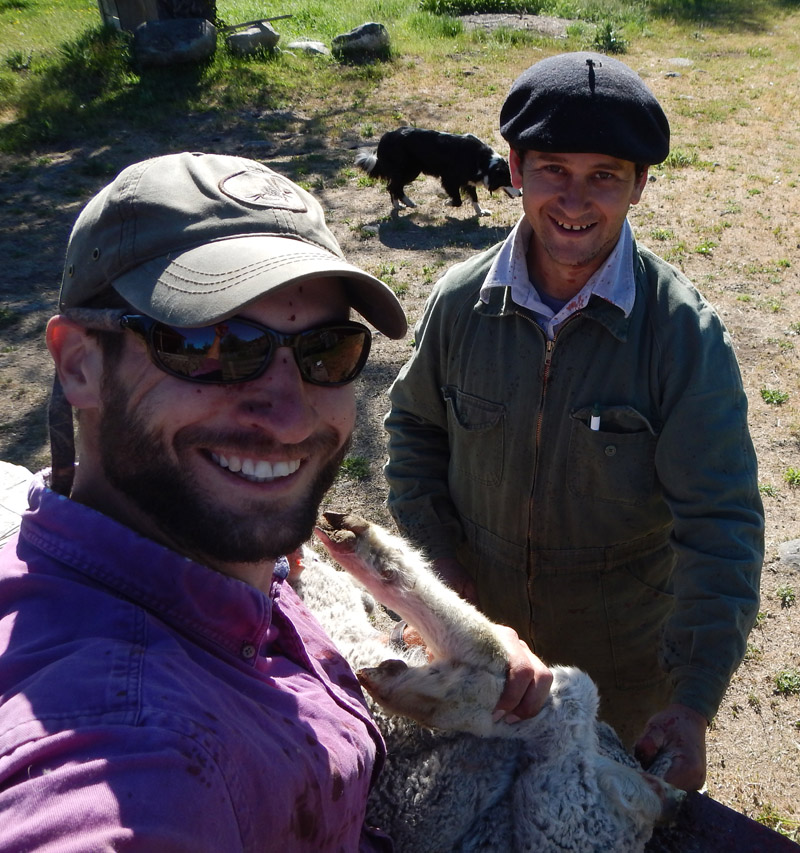 started at dawn and wrestled with the poor creatures all morning through the process of ear marking, castrating, and tail-docking, before eventually slaughtering and roasting one of them for the afternoon asado.  This year was a low-attendance event to be sure, with 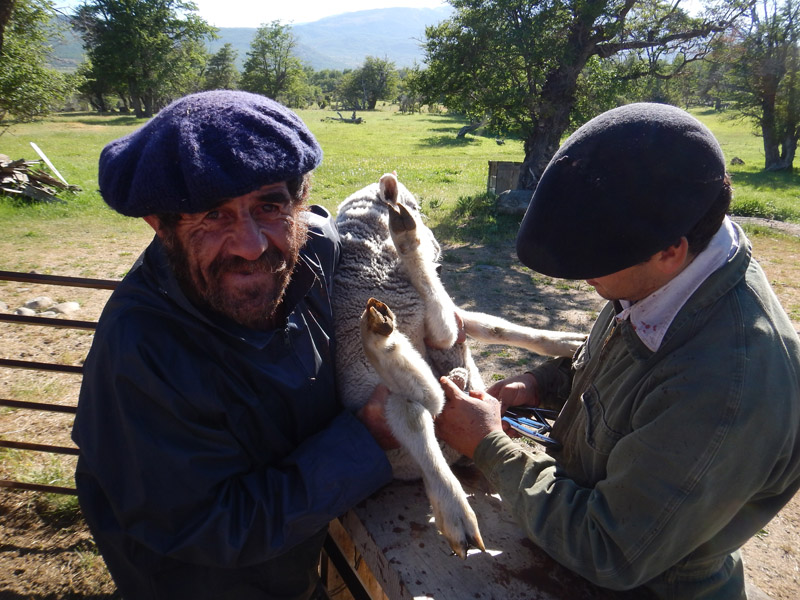 only myself and the always reliable Toledo from the peninsula puesto doing the pin-downs, and Marcelo doing the cuts.  The resulting feed was awesome though, and I washed all of the blood off my skin by swimming myself out most of the way across the lake that afternoon. 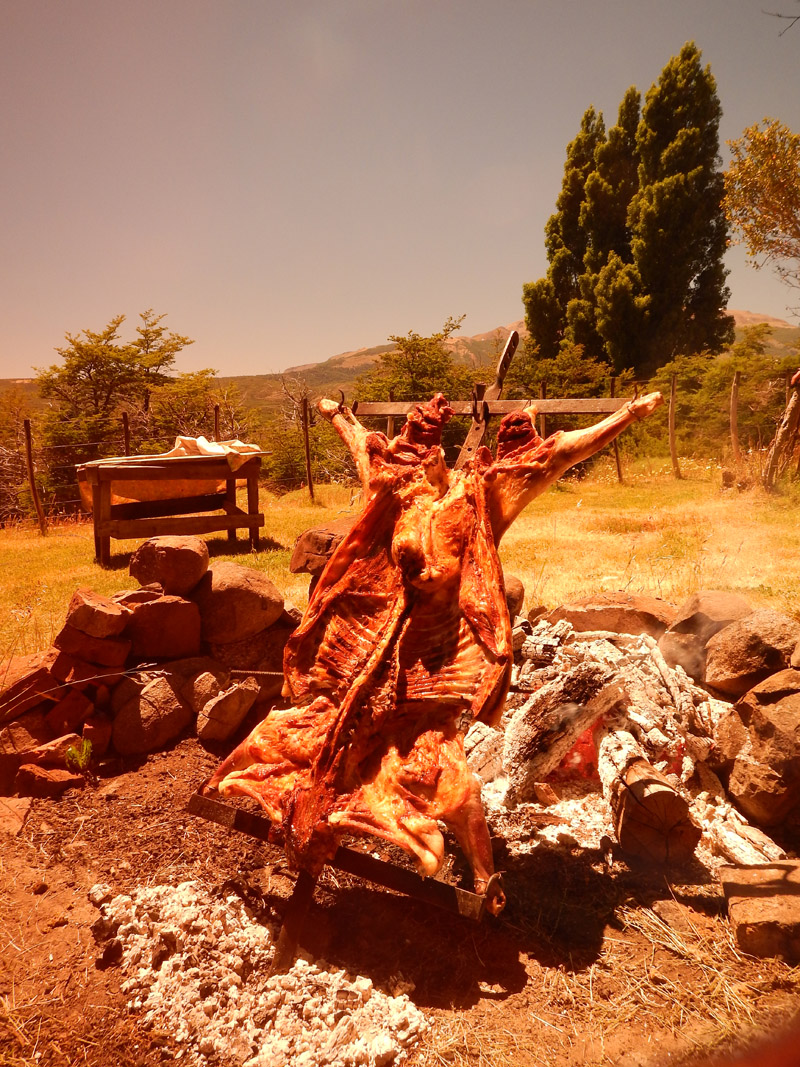 So anyway, here I am folks!  Write me back!  I would love to hear how all of you are experiencing the holidays, and where you are and what you are up to in the world. 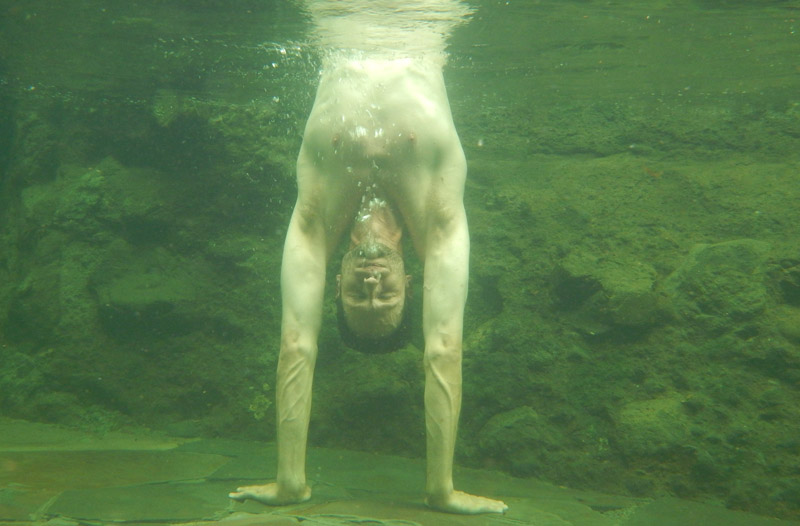 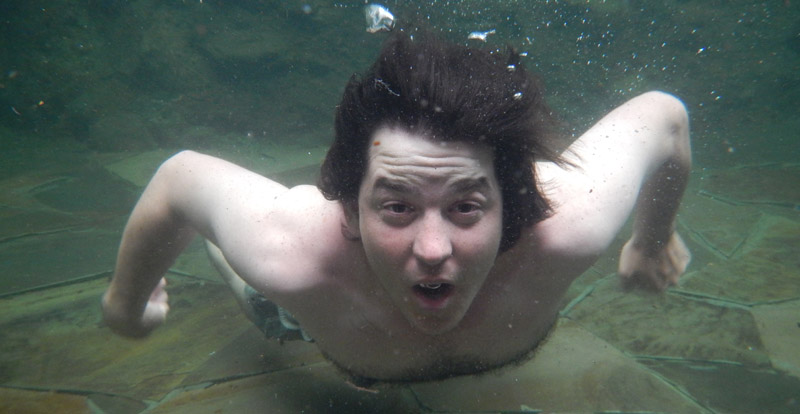 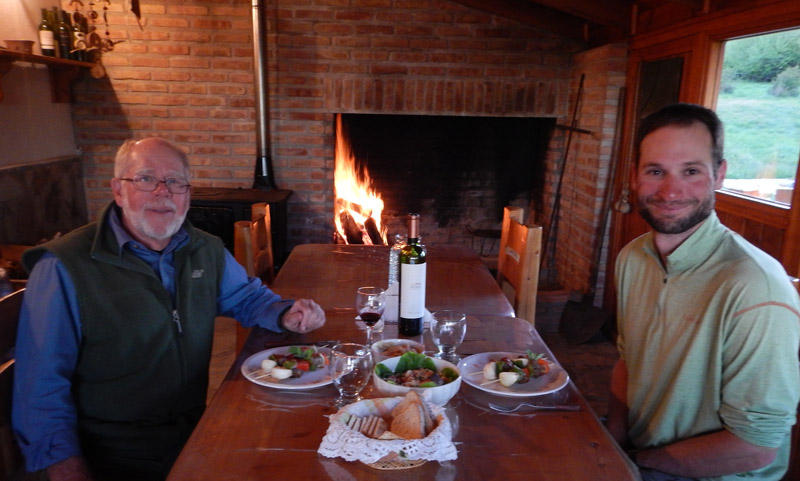 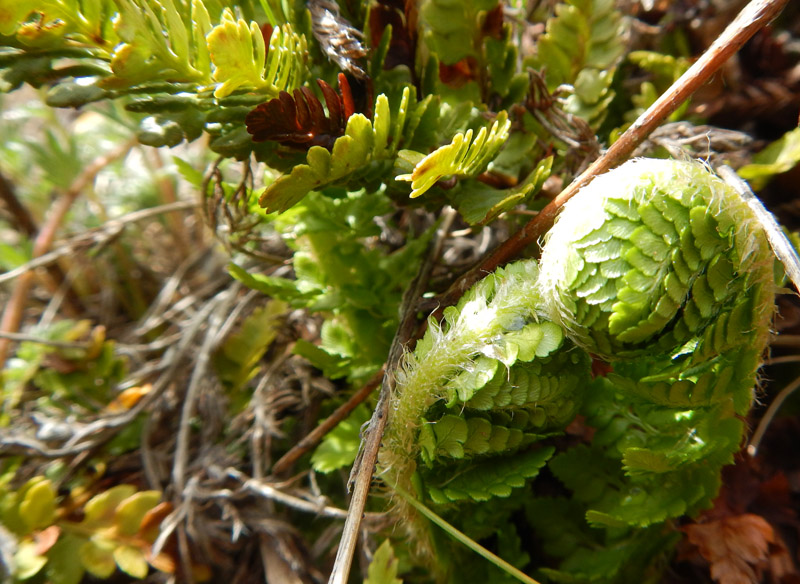 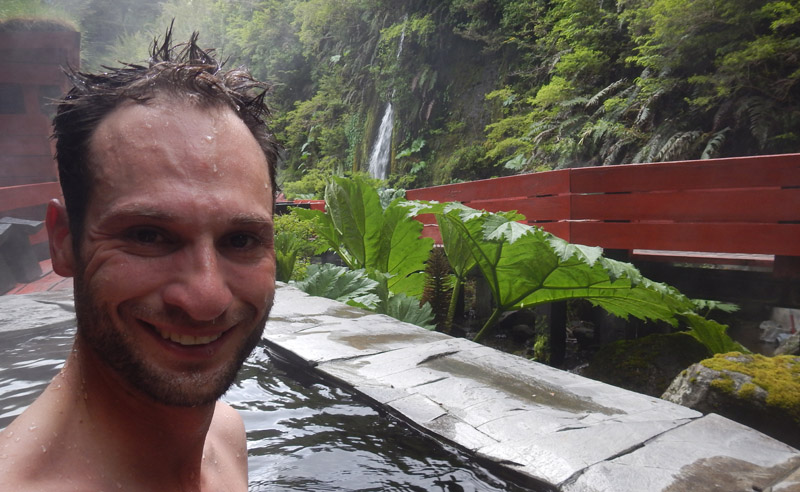