Well I guess all good things come to an end, but in Sal’s case, they tend to come to a 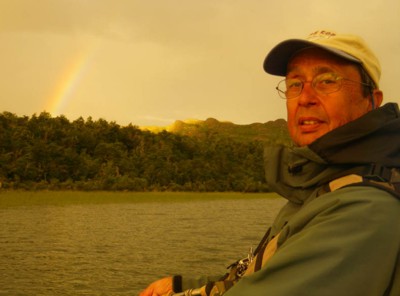 good end, and on this trip, a very good end indeed! We started out our last week out on Lago 1, putting in at Cabanas La Bahia and catching decent browns all day, taking turns rowing against the wind. Then it was off on another exploratory mission to a couple of the tributary creeks that cross Estancia Poncho Moro and flow into the Corcovado below the canyon. The first one we hit, Arroyo Pedregoso, was what you would call a no-go, in the sense that it turned out to be absolutely nothing like what we thought it would be in consistency or trajectory, and 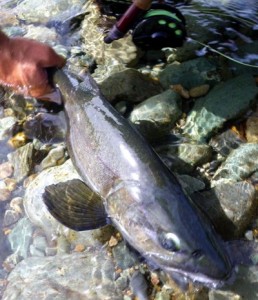 pretty much resulted in a slog that was only worth doing so that we could know better than to repeat it in the future. The next one we did was a stream that is well known to me though, and produced very nice brown trout which rose to our “Extra-Terrestrials” like they were candy. We fished some of the brookie run on the way back across that evening as well, all of us catching fish in the last hour of light, some of them quite large. (For those of us who are originally Appalachian types from North America, brook trout over 12” in length are something we will never quite get used to; and as such, brook trout that weigh three to five pounds can continue to amaze us night after night and we never quite get tired of it.) We stopped by my good friend Paulino Arias’ house the next day so the boys could pick up some flies, then headed back out to Lago Uno for one last go at the browns on the far side of the lake. These did not disappoint, and we each got several in between turns at the oars, most of the fish being caught on streamers fished none too deep as we had sufficient cloud cover to bring the fish up to the surface and sufficient breeze to conceal our presence. And then it was on to the grand finale. Sal’s last day of fishing in Patagonia for the year turned out to be his best – ever. We put in at Lago 3 on the public beach at around 11 this morning and Sal caught the first fish of the day on a fly he had tied himself a few da 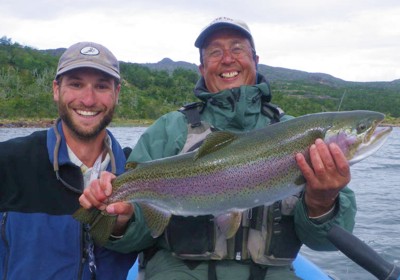 ys before. It was a smallish rainbow, by Lago 3 standards, but significant still as the first fish he had ever in fact caught on a fly he had invented himself. On the very next cast a huge brown came up for it right at the side of the boat, ate it, and left with it, breaking Sal’s tippet like it wasn’t even there. This event started a pattern that was to last the rest of the afternoon. Sal tied on a small black rabbit strip fly that he had purchased in Esquel on our last visit there, and he proceeded to hook and lose fish on it with such frequency that the whole thing became truly laughable. After several hours of this though he wasn’t laughing

any more, and by the time we had worked our way all the way up and back down the juncos on the far side of the lake it had happened literally more than two dozen times. In the meantime I had caught a couple of nice fish on a Black Giant, but Zach was skunked. I was rowing, and when we got back down to the bend where I caught my very first rainbow from Lago Tres back in 08’ I dropped anchor (deciding it was time to drink another beer in an effort to change our luck). Just then Sal finally hooked one good. He didn’t have faith though, and a few seconds into the fight he thought he had lost it, dropped his rod and truly screamed in frustration. Zach and I were not fooled however, and as I desperately hauled anchor we begged him to tighten the line. The fish was still on. This fish ran Sal all the way into his backing on the next run, then jumped, and had us all shut up after that as I rowed out away from the weeds and watched the fish do more than fifteen minutes worth of very good tricks trying to rid himself of Sal’s fly. Two runs all the way into the backing were recorded, and to be honest I think the anxiety was pretty high boat-wide as the fish went around and around us and ran again and again refusing to come to the net. I did my best to turn the boat according to the wild movements of the line, then finally manned the net and as I lifted it was heavy. Really, really heavy in fact, for it contained a fat female rainbow trout of better than thirty inches length. We were mostly speechless as Sal extracted her from the net and posed for a couple of pictures. Once we had them I put her over the side and Zach continued to photograph her under water as I revived her, which took a long time after the battle she had put us through, but in the end she swam off strongly into the deep. The anchor was re-dropped, the beer at long last opened, and a toast enthusiastically made, for the last fish of the trip for Salvatore Anthony Bruno, was a monster of a monster indeed.