June 17, 2018
Closing out the season down in Patagonia
by justin

Time flies when you’re having fun, on the run, or near moving water; and for the last few months in Argentina I’ve been all three.  I’d been away for quite a while really, and it was time to head “home” for a bit and catch up on, err,… um, business (nervous cough).  Of course my business usually involves fishing, so you know, I had to work, err,… um, you know, do business (second nervous cough). 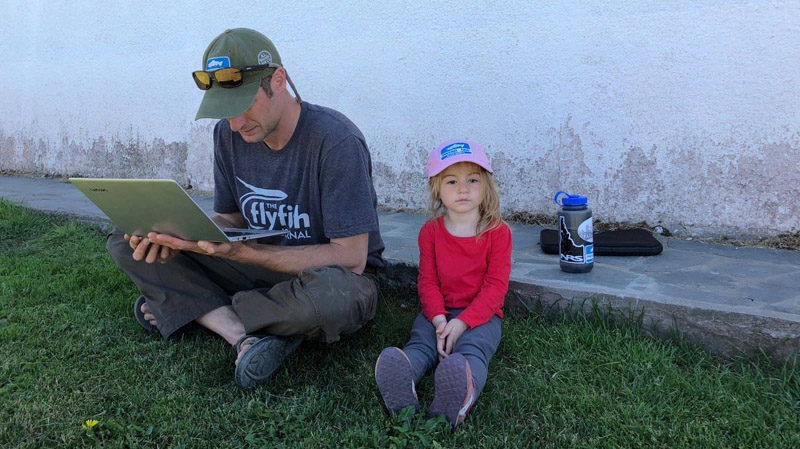 Upon arriving to my former home of Rio Pico the first thing Aya and Khadizhat and I did was visit all of the people I had missed down there these past few years, which took quite a while!  Most of these people don't have computers, many of them don't even have phones, and not a single one of them is on Facebook (Paulino 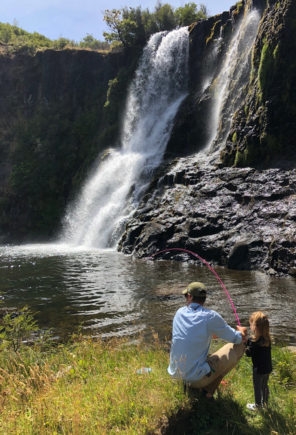 doesn't even know what that is).  In so many ways though this is refreshing.  Social interaction here is actually social interaction, generally involving two or more people in the same physical space exchanging spoken words, something to eat, and a máte being passed between them from one person's hands to the others.  I remember when it worked this way within my family, when we used to drive all the way from Georgia to Iowa for the holidays, the adults all catching up on a year's worth of stories over their card games and beers while us kids ran around out in the yard and tried to impress each other with how much we had grown up since the Christmas before.  Even when we got back home to Georgia instead of calling to let the Grandparents know we had made it we called and let the phone ring just once and hung up; that was the signal "all ok", and we didn't even have to pay the long distance rate.  I suppose I am showing my age a bit here, but then, well, I am 40. And was privileged to pass that birthday in Rio Pico with my 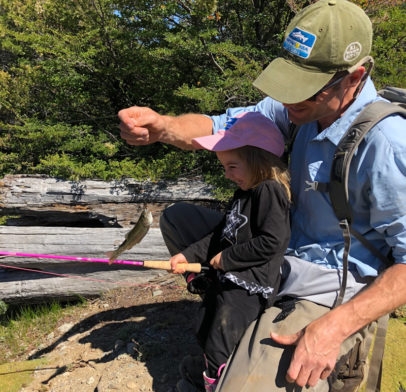 friends at an asado brimming over with laughter and smiles that kept me from worrying too much about the math.  Of course I'll still have to worry about trying to explain to Aya some day what a "library" was.

Apart from (or rather in between and during sessions of) all the catching up and socializing though we picked a lot of fruit from the abandoned orchards up by Pocho Hann’s mill, participated in the calf marking festivities out at Estancia Tres Valles, and even did a little fishing ourselves as a family (or course Aya caught all the fish!). 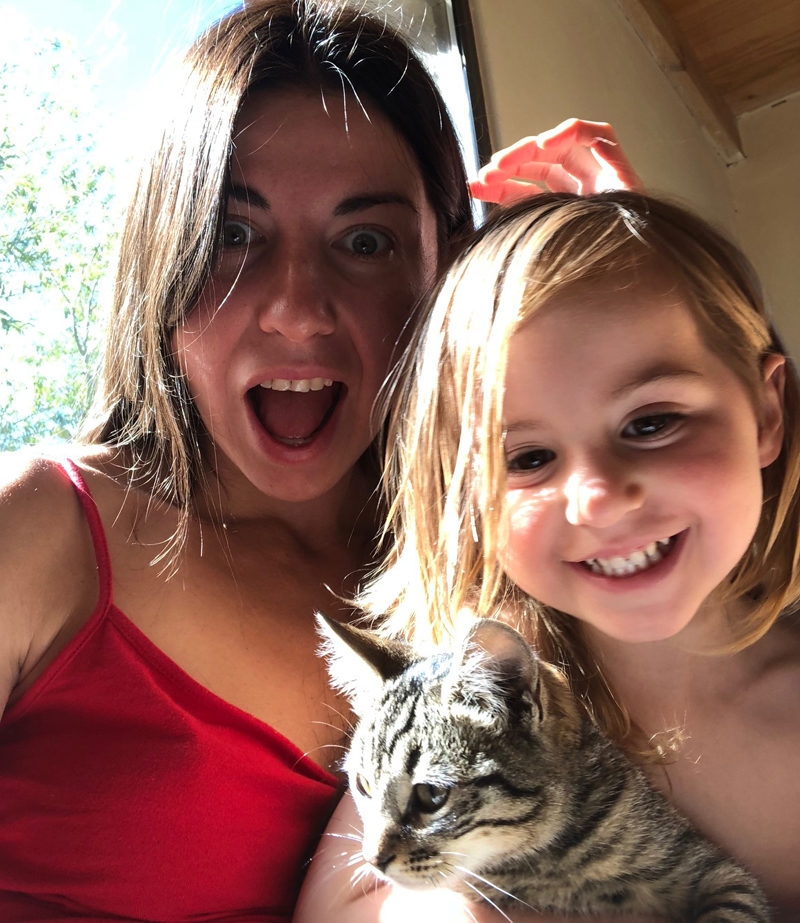 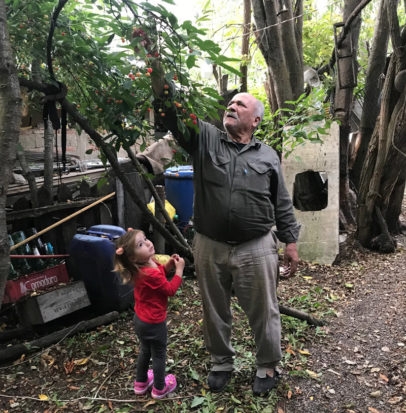 Paulino had a ton of cherries this year too, and he and Aya ate astounding quantities of them together every time we were at his house.  She called him "Grandpa" the whole time we were there!

The good Captain McCrossin made his first appearance in the area in several years, Mike Terepka and I got to fish quite a bit while Ash and the girls hung out back at the campsites, Aya and my all time favorite mechanic "Nelson" fixed our old Hilux no less than a dozen times, and Aya started some sort of a Love affair with a little blond fellow named Pedro who lives in one of the upscale neighborhoods on the other side of the tracks. 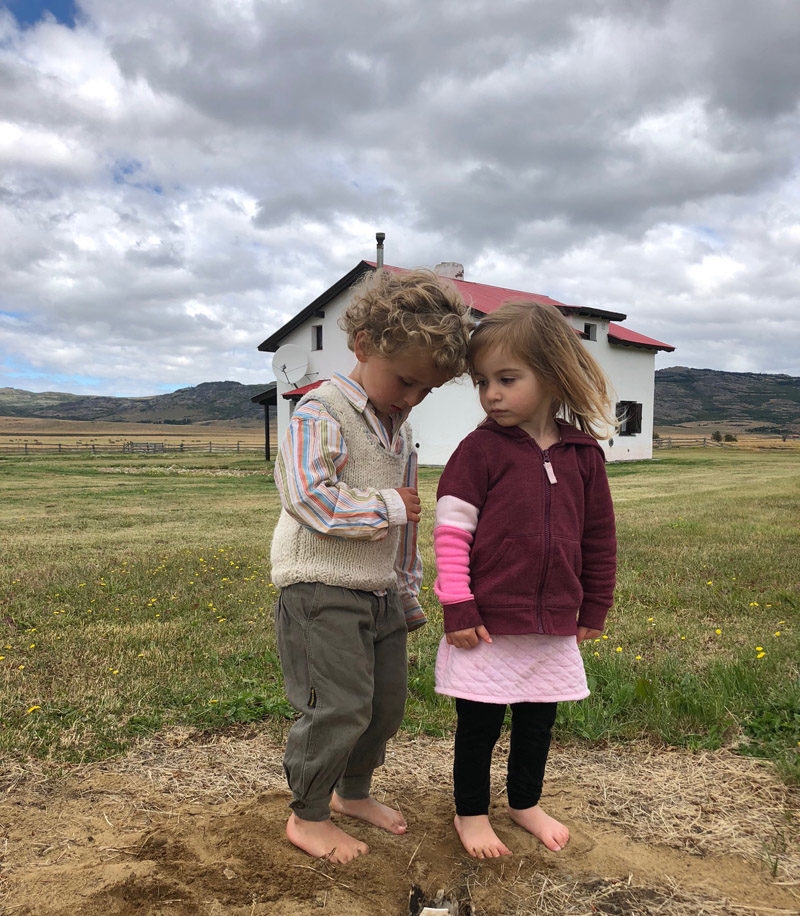 Aya and Pedro doing a scene from Gone with the Wind 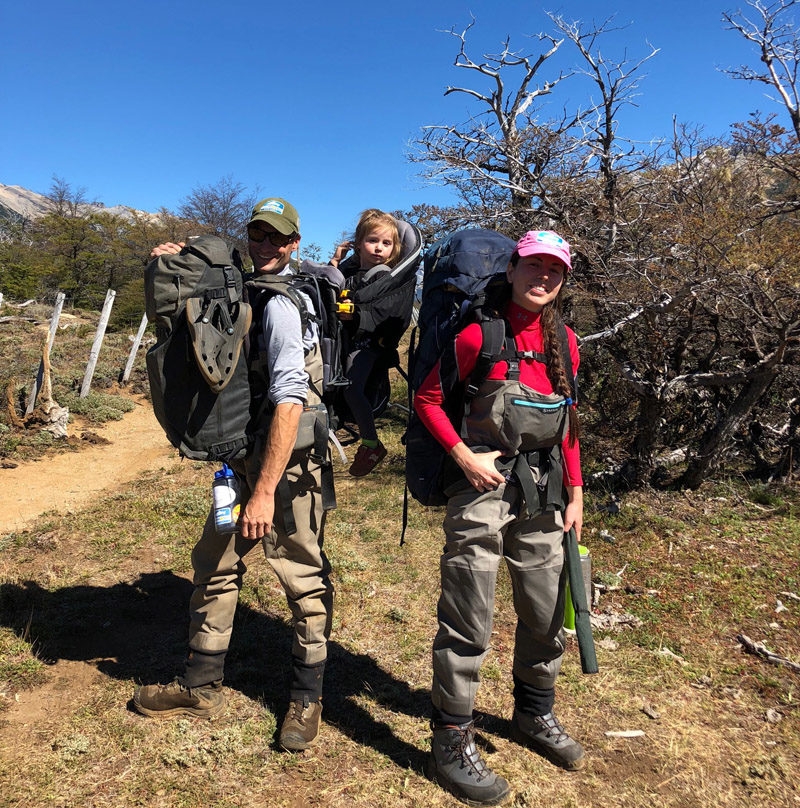 Heading into the back country for some camping 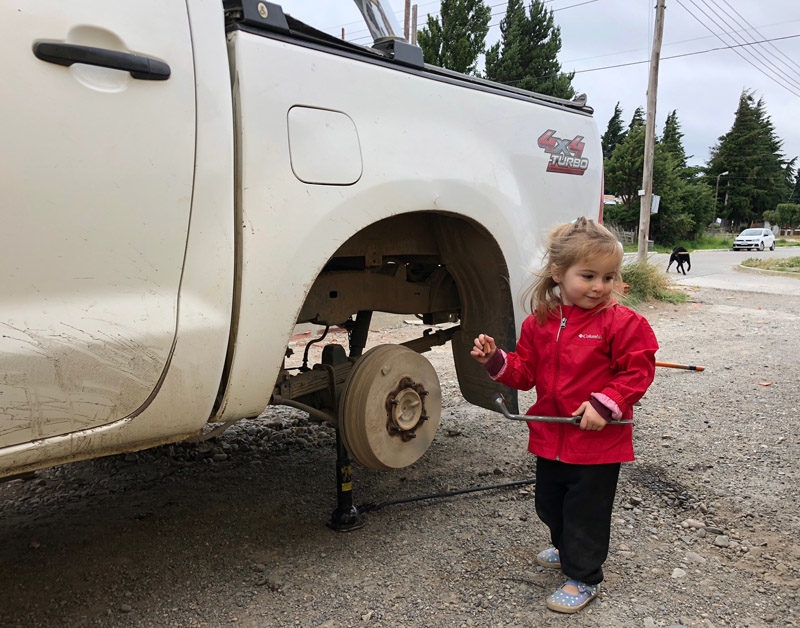 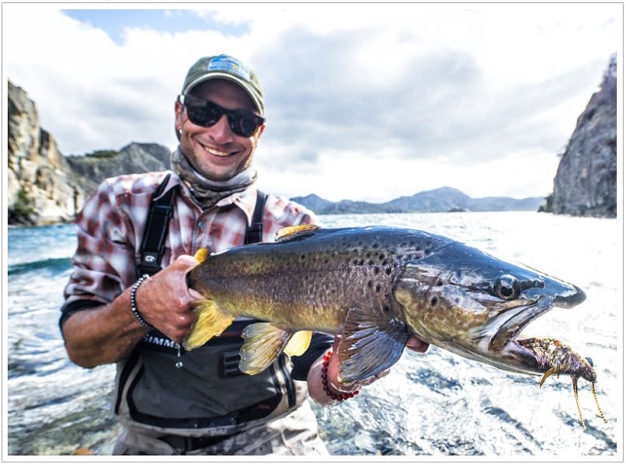 Overall it was an awesome time for all of us, and we are very much looking forward to being back next season for more!

Now down to Business

But seriously, even though I was having a great time there were some things that had to be done like setting up a new floating lodge program for Dorado on the Parana, visiting a new Lodge on Lago Strobel in Santa Cruz, and tuning up our bread and butter baby the Trout Bum in good ol’ Rio Pico, all of which I did and had an awful lot of fun doing in the process.

So the first stop on my way through Buenos Aires was the Golden Dorado River Cruiser, a completely unique operation that is fairly new but developed by folks who definitely know what they’re doing.  The Golden Dorado River Cruiser is actually not just a boat as the photos from outside might make it seem, but an actual mobile lodge, complete with all of the amenities and comforts one might expect from any of the other lodges on the Parana.  Except this one moves!  As such, there is never any reason to fish the same water twice, and we have the ability to always be located in whatever stretch of the river is fishing best at any given time.  Add in the fact that the program starts and ends in Buenos Aires with no additional flights required, and you've got a perfect bolt-on destination for any of our other programs in Patagonia to the south.  A total win-win and at a very affordable price point to boot. 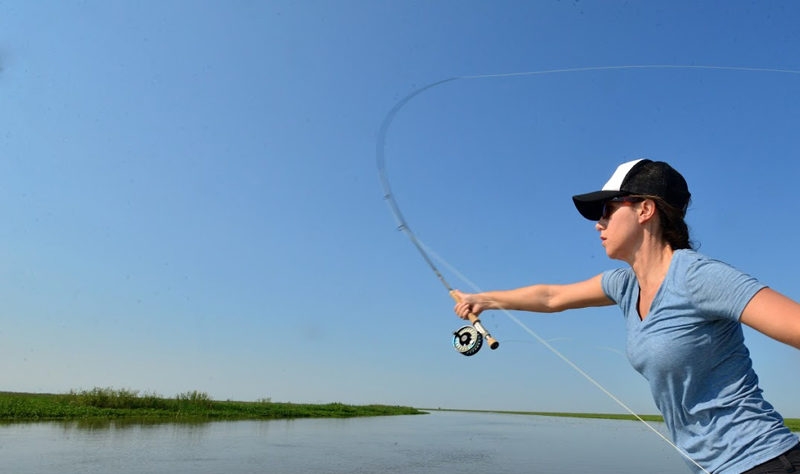 The fishing on the lower Parana is not something we sell as a search for trophies; it's more of a numbers game.  Average Dorado in this area weigh around four pounds, but each week fish are landed that are over fifteen, and the main attraction is the almost constant action and the fact that in the evenings we are often fishing dries.  Did I say dries?  I meant mice.  No joke.  There are fish to be caught all day long on the standard streamers but the action at dusk on the mouse patterns is almost always what can only be described as a blitz.

My writer friend Zach Matthews and photographer Rebecca Shaneyfelt and I were literally astounded our first evening in one of the skiffs that are fished out of off the mothership when the guide couldn't even keep up with the landings and un-hookings as Dorado after Dorado after Dorado smashed our flies.  Luckily this is not normally a problem since there are usually only two anglers in the boat (I'm a bit of a tag-along).  On top of the Dorado we also caught plenty of the saber-toothed Payara, and even Piranha up to three pounds.  Food was spectacular, guides were excellent, and it was an obvious and enthusiastic Yes! for us to offer it to our guests. 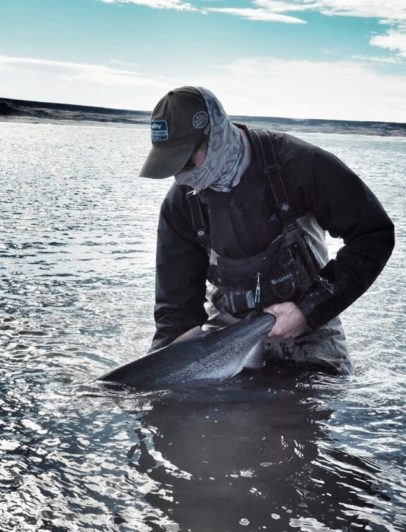 Next on the list of new destinations to check out was the newly opened Lago Strobel Lodge, situated on a far shore of the lake that I had explored on foot so many years ago, and which we have been sending guests to fish ever since.  The new lodge was built from an old estancia house in a protected spot that is actually surprisingly lush compared with the surrounding lunar landscape.  A natural spring provides water to this little alcove in the rocks, and as such there is quite a lot of greenery and even flowers around the place, providing a very different view than those seen out the windows of the few other buildings that exist around the massive lake.  Our friend Zach Matthews was along for the ride on this one as well, and in fact already has an article on the trip in Gray's Sporting Journal - check it out if you get a chance; all of the photography in the piece was shot by Rebecca Shaneyfelt of Spitfire Photography who was also with us those days.  Fishing conditions were tough with high winds and a cold front moving through, but on Lago Strobel it hardly matters.  The lake is just plain full of massive trout.  For those of you who aren't yet familiar with the body of water in my now home country that is often referred to as "Jurassic Lake", it is a naturally occurring anomaly even within the trout-rich country we inhabit south of the 40th parallel.

What makes it such is a combination of chance conditions? A lake so full of scuds the trout can graze on them like cattle on grass, the right water chemistry and temperature for rapid sustained growth of healthy fish, and a relatively short stretch of spawning water in the Rio Barrancoso (the only river that enters the lake, which also has no outlet) that keeps the fish from overpopulating and as such experiencing the inevitable shrinkage that always accompanies that occurrence.  It's just a perfect system for what it produces, which are all day action numbers of ridiculously massive trout.  The lodge was comfortable, the food was good, and this section of the lake is truly still being explored and revealing its secrets to those who are willing to walk, although there is also an easily accessible and wind protected bay just below the lodge.  As such, we were happy to add it into the catalog as well, and look forward to spending more time there with clients as the years go by. 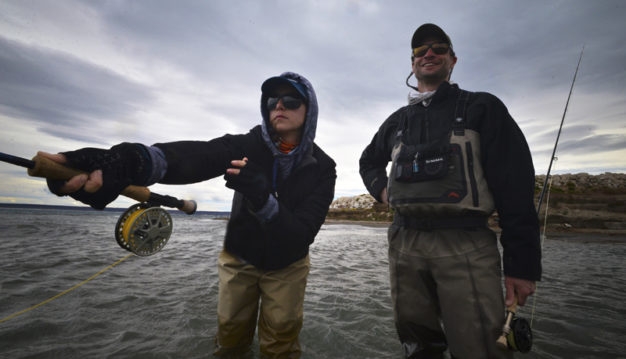 Then it was on down to my old home town of Rio Pico!  Over the last ten years since we started our first Trout Bum program down in Patagonia, we've watched the thing evolve in a lot of ways, many of which were surprises even to us.  Initially we set out to develop a program that would provide affordable access to the incredible fishery around Rio Pico for a market that we felt was then (and still is) under-served, namely, fly fishing guides.  We ourselves had guided clients all over the world in spectacular places that we could never afford to fish as clients, and so the idea was to create a program that focused almost entirely on the fishing with very little luxury, at a price point our own peers could afford.  This worked, and the response from that market was actually astounding.  The guides came down and found themselves right at home in our little culture, with the flexibility to fish how they wanted and as much as they wanted every day of the trip, with everything else they needed provided in between, and a price tag they could afford even after the airfare.

Since then the program has continued to grow and evolve across the better part of a decade, and as we have gotten the thing dialed in bit by bit over the course of those years it has evolved into a pretty darn well-oiled machine that actually has far more creature comforts than it started out with, but maintains the flexibility and fishing-time focus it always had.  This past season saw our biggest total bookings ever, and more than half of those were repeats from previous years.  We've now got three different lodging options, a full time cook so that the guides get some rest in the evenings, and even more area waters to fish than ever before (I just found a totally untouched spring creek full of big brown trout).  This last part is hard to believe considering how long we've been down there, but as Roderick Haig-Brown once said "Everything moves and changes, and no two days are ever alike for a fly fisherman". There is just so much water around us down there; and so the explorations continue!  Come on down.